Prajwal Revanna: The rebellious one 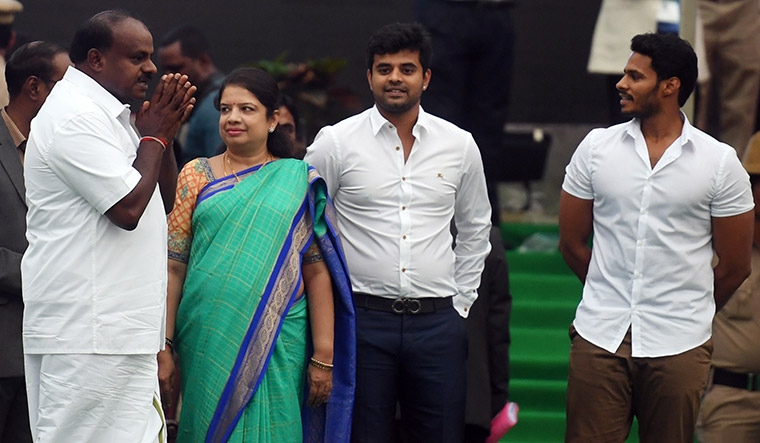 Prajwal Revanna, along with his parents and elder brother, offered prayers at five temples before filing his nomination for the Lok Sabha election from Hassan. The mechanical engineer, who is making his electoral debut, also chose the most auspicious time to file the nomination, as advised by the astrologers.

When the Janata Dal (Secular) announced its decision to field Prajwal, he was sharing the dais with his grandfather, former prime minister H.D. Deve Gowda. Addressing the huge gathering, Gowda said that he was vacating the Hassan Lok Sabha seat for Prajwal. Then, the grandfather-grandson duo broke down before the crowd, as did Prajwal’s father, H.D. Revanna, mother, Bhavani, and elder brother, Dr Suraj.

Prajwal, who was pursuing an MTech in Australia, came home to assist Gowda in the 2014 Lok Sabha polls, and never returned. He started touring the Old Mysuru region and ran his father’s assembly polls campaign in Holenarsipura. He made inroads into Belur, Hunsur, Mandya and RR Nagar in Bengaluru, too. But, he was denied a ticket for the assembly polls.

In his eagerness to make his political debut, he had many face-offs with his uncle and Karnataka Chief Minister H.D. Kumaraswamy, who headed the state unit of the JD(S) until recently. Prajwal had once accused the party of “suitcase culture”, alleging that people with money were preferred over grassroots workers during ticket distribution. Gowda said that he was made to apologise. Prajwal’s rebellious streak comes from his mother, who is from a political family in KR Nagar.

When the JD(S) put up a dummy candidate in RR Nagar in 2018 to help the Congress’s sitting MLA N. Munirathna, Prajwal, a ticket hopeful, was enraged. The JD(S) was returning a favour as Munirathna, a film producer, had cast Kumaraswamy’s son Nikhil in his magnum opus Kurukshetra. Prajwal and Nikhil see each other as rivals as they both want the larger share of Gowda’s political legacy.

When Prajwal did not get the assembly ticket, Gowda dropped a hint: “I will not rule out Prajwal fighting the 2019 Parliament elections from Hassan as I am not inclined to contest, owing to my age and health considerations. I have discussed with senior leaders of my home district (Hassan) and they are not keen on contesting the Parliament seat.” Also, Preetam Gowda, a young BJP leader, had wrested the JD(S) bastion—Hassan—in the last assembly polls, which might be a reason why Gowda chose Prajwal over the seniors.

But, Kumaraswamy, who was present when Prajwal filed his nomination, said, “Prajwal did not emerge all of a sudden to contest from Hassan. He has worked hard for the party over the last ten years.”

When asked about his chances, Prajwal only said that he had left it to the people of Hassan.