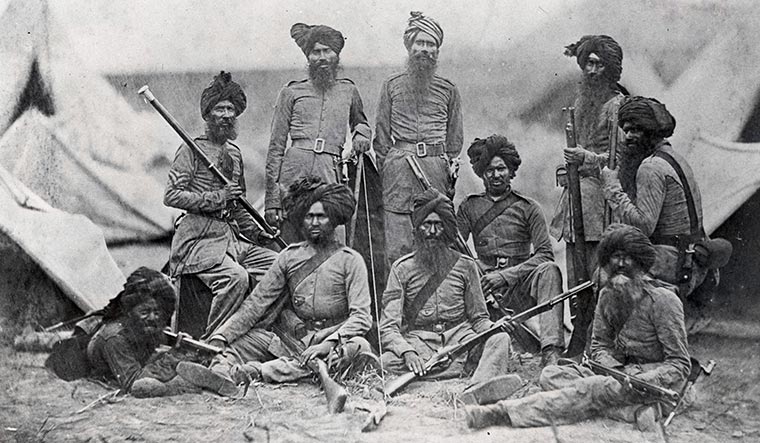 Warrior gene: Sikh soldiers of the15th Punjab Infantry regimentfought with the British during the Revolt of 1857 | Getty Images

Fiercely loyal when loyal; ferociously rebellious when rebellious. That is how the Sikhs have always been towards the central power in India.

Spiritual Sikhism was born around the beginning of the Mughal reign. When Guru Nanak passed away in 1539, the Mughal empire was 13 years old. The next year Humayun lost the throne to Sher Shah Suri. While fleeing across the Indus, he met the second guru, Angad, and sought his blessings. By the time he reclaimed his empire, the third guru, Amar Das, had been installed.

When Humayun died in a freak accident, his minor son Akbar was crowned hastily in Gurdaspur in the Sikh heartland. By now, Sikhism had grown into a cult, and institutionalised the value of charity. Impressed, the young Akbar sat cross-legged in a Sikh langar to dine with the soiled and toiling folk. He gave them land at Ramdaspur; they would name it as Amritsar and build a great temple.

This phase of friendship between the Sikhs and the central power lasted seven decades.

Akbar’s death in 1605 changed it all. After Jehangir massacred the Sikhs and executed Guru Arjan Dev, the sixth guru, Hargobind, called the Sikhs to arms. Shah Jahan evicted the guru from Amritsar; Aurangzeb executed the ninth guru, Tegh Bahadur, in Chandni Chowk. Realising that ties with Delhi had turned irreparable, the tenth guru, Gobind Singh, militarised the faith in 1699. The desperate Mughals struck back. Gobind’s successor, Banda Bahadur, was captured and executed. Farrukh-Siyar massacred Sikhs at the rate of a hundred a day.

This second phase, of ferocious hostility, lasted a century.

As the Mughal sway weakened, the Sikhs set up their own state. But if the foreign enemies of India thought the Sikhs would aid them against the central power in India, they were disappointed. As Persian invader Nadir Shah and the Afghan warlord Ahmed Shah Abdali marched on Delhi, the Sikhs gave them hell. They pounced on the Persian and Afghan armies, and rescued the girls whom the invaders had captured from Delhi, and sent them home safe. The Sikhs under Jassa Singh Ahluwalia took Lahore from Abdali, and made it their capital. 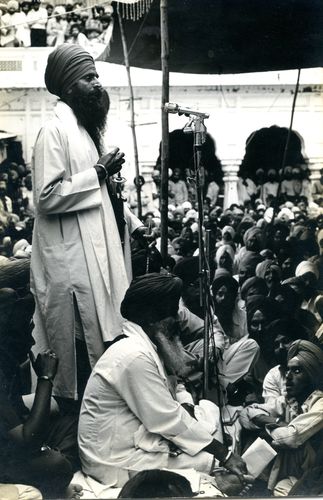 Days of terror: Jarnail Singh Bhindranwale addressing a crowd in the Golden Temple.

But Delhi erred again. Instead of allying with the Sikhs to fend off the Afghans, emperor Shah Alam II sent Zabita Khan to fight the Sikhs. But they won him over. They consolidated under Ranjit Singh, who set up the Sikh empire from Lahore.

By now the British, having captured Delhi in 1803, had emerged as the paramount power. Ranjit thought it would be foolhardy to take them on; the British viewed him as a useful buffer against the Russian empire’s expansion into Central Asia.

This third phase, of a wary friendship with the paramount power, lasted a century.

Ranjit died in 1839. By now, the British had become suspicious of Dost Mohammad of Afghanistan. The Sikhs, warring among themselves, allowed a British Indian army to march through Punjab to invade Afghanistan. The invasion ended in disaster.

Realising that their humiliation would embolden the Sikhs to challenge their paramountcy, the British fortified their border garrisons. Skirmishes broke out between the British border posts and the Sikh militias on the Sutlej. Alarmed, governor-general Henry Hardinge marched with Sir Hugh Gough, and fought four swift battles in three months. The war ended in a treaty, to honour which the Sikhs had to sell Kashmir to the Dogras.

It was a tenuous peace, marked by strife between the Sikh kingdom under Ranjit’s minor son Duleep and British India under the young and imperious Lord Dalhousie. Another war broke out in less than two years. Pitched battles were fought, the bloodiest at Chillianwala and Multan. Finally, the British delivered a crushing defeat on the Sikhs at Gujrat and annexed Punjab in 1849.

This fourth phase, of blood-soaked hostility, lasted a decade.

Impressed by the chivalry, sense of honour and “the splendid gallantry of our fallen foe,” as Hugh Gough wrote, the British treated the Sikhs with respect, as they had treated the Gurkhas in the 1820s. Promising that “you shall have the best men in India,” Dalhousie sent his finest officers to Punjab. “I shall rule you with the pen or the sword,” John Lawrence, one of them, promised. With the pen, he rewrote their laws, and with the sword he enforced those laws. Canals were built to wet the fields, and lure the youth from thievery to prosperous peasantry. The healthy were taken into the army, where they would compete with the Gurkhas in bravery, honesty and loyalty. Thus, when the regiments of the east mutinied in 1857, the British could count on the Gurkhas and the Sikhs to suppress them. Later, they would serve with honour in the empire’s wars in Afghanistan and Burma, and in Europe and Africa in World War I. 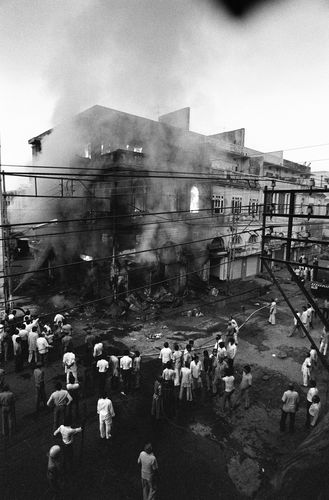 A building burned during the anti-Sikh riots in 1984 | AFP

Again, it was the chicanery of the central power that broke the trust. Like other Indians, the Sikhs had expected the British to be politically gracious after the war. But the Montague-Chelmsford reforms, as they seemed to be unfolding, were a snub—no dominion status, no representation in the central council, no major political concessions. The Sikh faith in the British sense of justice and fair play was shaken.

The Muslims, too, were getting restive over the humiliation of the Caliphate at the end of the war, and the Balfour promise of a Jewish homeland in Palestine. Mahatma Gandhi, till now overshadowed by Bal Gangadhar Tilak and others, realised the moment had come for a mass upsurge by the Hindus, Muslims and Sikhs. The British, as he had observed earlier, had been ruling with the consent of the Indians. That consent had to be broken.

The Rowlatt Act gave him the chance. Mass protests, signalling noncooperation by the masses towards the rulers, were organised across India. The Jallianwala Bagh meeting was one such. There, on Baisakhi day after a bountiful harvest, the British stabbed them in the back.

Soon the Sikhs were in full force in the national movement which culminated in Indian independence. When India was partitioned, they jumped to the defence of the secular but Hindu-majority Indian Union, and bore the brunt of the partition riots.

Soon they felt cheated. The promised Punjabi-speaking state took a long time to come, and came without the promised Chandigarh. Punjab’s waters continued to be given to Haryana, certain fertile villages, too, were denied, and the language of the gurus and the Adi Granth did not get the due recognition. Protests broke out all over Punjab. Yet, when Pakistan invaded in 1965, they suspended their protests, and lent their powerful shoulders to the war effort.

This love-hate phase lasted five decades—from the 1920s till the 1970s.

The peaceful protests continued after the war. But, Delhi resorted to the same tricks that the Mughals and the British had. None of the promises were kept, and Punjab’s democratic aspirations were snubbed. Six of their elected governments were dismissed in four and a half decades.

The betrayal led to an armed insurgency under the brigand-preacher Jarnail Singh Bhindranwale. The Centre acted with brute force. It sent its Army, one in which the Sikhs had served loyally, into the holy shrine at Amritsar. The insurgency led to a series of assassinations, including those of several moderate Sikhs as also the prime minister of India, and a cowardly massacre of the Sikhs on the streets of Delhi.

This violent phase lasted one decade and more.

Finally in 1992, a minority prime minister from the south worked wonder. At the end of a terribly violent election boycotted by four out of five voters, he performed the miracle of democracy. “Yet another match has been struck in the enveloping darkness. It can light a lamp or ignite a powder keg,” THE WEEK wrote in 1992.

It did light the lamp of hope. If the imperious Dalhousie in 1849 had sent his best men to Punjab, in 1992 the shrewd P.V. Narasimha Rao allowed the best men, whom Punjab had elected, to rule them.

Soon, the world witnessed the incredible feat of a heartland insurgency being won over through an impersonal democratic process.