From Ambani to startups, everyone joins the new space race 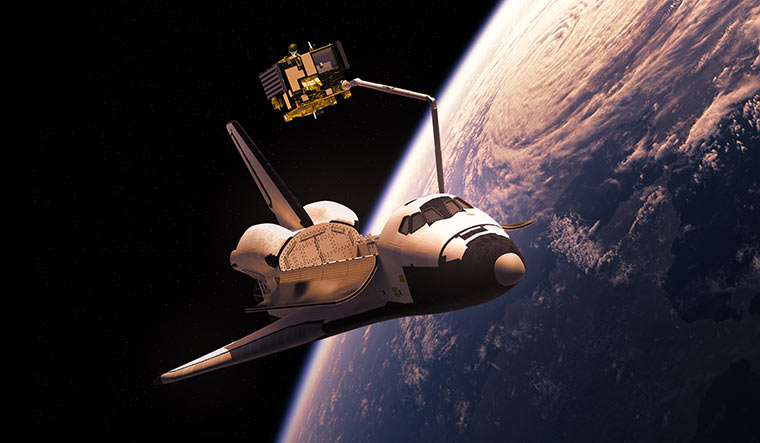 Have you heard about Shakuntala in space?

When Amazon founder Jeff Bezos soared up into space for 10 minutes last summer in his phallic New Shepard rocket, the world was agog. Just as it was a few days earlier when the British entrepreneur Richard Branson did his own quick but epochal sojourn into space.

Shakuntala, however, barely made headlines. The satellite, made by the Bengaluru-based startup Pixxel, lifted off into space on a SpaceX rocket on April 1. It uses hyper spectral imaging technology to spot anything from soil quality to crop infestation to gas pipeline leaks or even pollution levels. “The idea is to deploy a constellation of the world’s first hyper spectral satellites that can enable us to see these things as a private venture and provide the service on a commercial basis at an affordable cost to organisations around the world,” said Awais Ahmed, CEO and cofounder of Pixxel, one of India’s most talked-about space startups. “We haven’t even scratched the surface of what we can do.”

Boldly going where no man has gone before, and giving company to startup innovators like Ahmed, are some of India’s biggest entrepreneurs. First off the block is Bharti Airtel’s Sunil Mittal. “With our large talent pool, growing prowess of homegrown technology startups and private enterprises, India is at an inflection point of what will be a giant leap in the space arena,” said Mittal, who has tied up with the British government for OneWeb, an ambitious venture to beam internet directly from space.

OneWeb intends to provide the service through 648 low-orbit satellites circling the earth—428 are already up and the service might be launched by the end of the year. “OneWeb [satellites] will cover the length and breadth of India, from Ladakh to Kanyakumari and from Gujarat to the northeast, and bring secure solutions to enterprises, governments, telcos, airline companies and maritime customers,” said Neil Masterson, CEO, OneWeb.

Not far behind is Mittal’s bête noire in the telecom space, Mukesh Ambani. His Jio Platforms announced in February its intention to set up a joint venture with Luxembourg-based SES S.A. to provide satellite services in India. Also in the fray is Tata, which is likely to offer Lightspeed, a satellite broadband service from Canada’s Telesat. 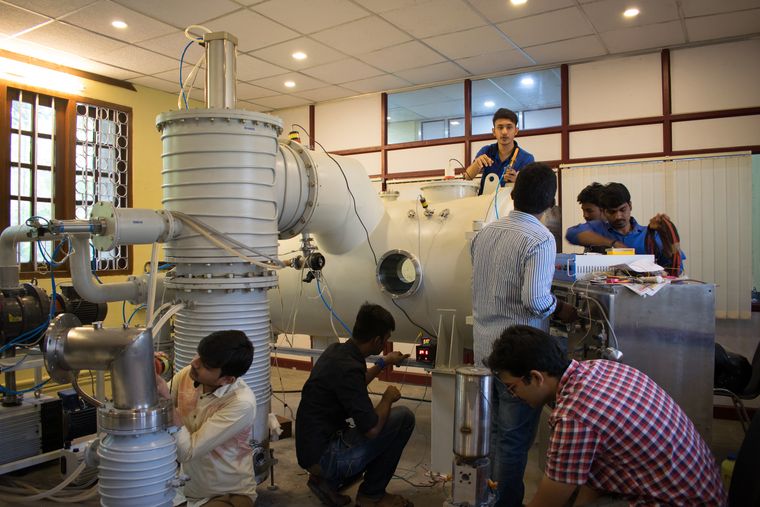 Clean-up mission: Digantara has a business model of mapping objects and debris in space.

While satellite internet seems to be the icing on the space cake, by no means is it the only area that the big guns have shown interest in. Gautam Adani, who is in the process of building a conglomerate, has thrown his hat into the ring. Along with L&T, he is planning to make the next-gen polar satellite launch vehicle rocket. In fact, Jitendra Singh, Union minister of state for space, told Parliament recently that the space regulator has received applications from 48 private firms to undertake space activities.

The reasons are not too far to seek. For long the preserve of governments and their science and defence establishments, space has been getting opened up to private business over the past few years in many countries. For India, Covid-19 and the launch of Atmanirbhar Bharat were the turning points. Among the slew of restructuring and stimulus packages announced by Finance Minister Nirmala Sitharaman in May 2020 was the opening up of India’s space sector to private players.

This meant anyone with an idea and the resources could launch a business related to space technology for commercial use, and hope for support from IN-SPACe, the government’s newly set up regulatory body, and even testing permissions at Indian Space Research Organisation’s facilities. The only private Indian players in space until this were vendors on contract providing specific parts or services to ISRO’s space programmes. 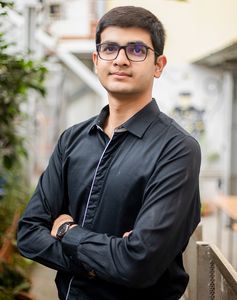 The global space economy is estimated to be worth about Rs34 lakh crore, and India’s current share is at just 2.68 per cent. Researchers from the Thiruvananthapuram-based Indian Institute of Space Science and Technology, along with the Centre for Development Studies, estimated that India’s space economy was worth Rs36,794 crore in 2021.

The investment services firm ICRA estimates that once commercial satellite communications, the area on which Bharti, Reliance and Tata have their eyes set on, kickstarts and user numbers go up, annual revenues could be as much as Rs6,000 crore in three years time.

The big players’ interest in beaming internet from space is understandable. The current mode of broadband internet distribution through cellular mobile networks and wired connections is limiting and large swathes of the planet remain unserved. Though satellite telephony (voice calls only) was tried by some players back in the 1990s, the business turned out to be unviable for most of them. But now, the proliferation of broadband internet-enabled satellites—Elon Musk’s Starlink has some 2,000 satellites for the purpose up there—means technology has improved and cost has come down.

“Satellite communication will remain crucial for broadband inclusion of a lot of sparsely populated areas that have not been connected through terrestrial network,” said Sabyasachi Majumdar, group head and senior vice president, ICRA. K.R.Sekar, president of the Bangalore Chamber of Industry and Commerce, and partner, Deloitte, said the growth of digital broadband connectivity was too slow and leaving large parts of India unconnected. “Satellite communication is a welcome option,” he said.

This would help around 25,000 villages that the government has assessed as too difficult to get on the BharatNet project. But it means a lot more than faster movie downloads or better multiplayer gaming while sipping yak tea in a remote village in Ladakh. Connectivity through satellites would in one stroke transform the operational efficiency of the shipping and aviation industries, getting passengers and crew in realtime and full-time contact. Beyond consumer usage, it will be vital in anything from tracking cargo and remote medical care to border surveillance and disaster management.

With the potential so huge, it is not just Indian biggies who are looking for liftoff. Musk intends to take a big bite out of the internet pie in the sky. Starlink service has 2.5 lakh users in 25 countries, and recently applied for authorisation to send up 30,000 satellites more, to get every inch of the planet connected. 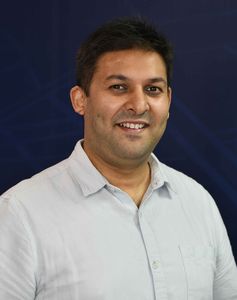 Musk had set up a subsidiary in India which got more than 5,000 pre-orders, before the government snubbed him by asking to stop the bookings as the company did not have a licence. Musk’s rival in space and riches, Bezos also has major plans. Amazon’s Kuiper Project, which last year took over Facebook’s (now called Meta) similar project aiming to deliver internet services to remote areas, is targeting a global footprint through its own set of 3,000 satellites.

While satellite broadband internet may be the most lucrative of this galactic gold rush, opportunities abound in anything from making rockets to clearing satellite debris in space. The government’s rule relaxation has opened the floodgates—new companies in the space business burgeoned from just 11 before the policy change to 47 just two years later.

These companies have made their mark through sheer innovation and originality of ideas, be it Digantara, which has a business model of mapping objects and debris in space, or AgniKul Cosmos, which became the world’s first company to successfully test a fully 3D-printed rocket engine.

“The good thing is that the government is encouraging local firms to participate in the opportunity to develop indigenous technology and applications,” said Rohan Varma, CEO & executive director, MapMyIndia. “There are so many innovations that can come because of the opening up of this sector for defence or civil societal economic application, like vegetation index for farmers or cyclone alerts for fishermen.”

Venture capitalists have pumped in nearly Rs1.3 lakh crore into the space sector internationally. While some desi firms have registered themselves in the US to benefit from this, in India they have grants from alumni associations and academic institutions like the Indian Institute of Science. The entrepreneurship cell at the Society of Innovation and Development at IISc has been at the forefront of this. “Even angel investors show interest only when companies reach a certain stage and are making revenue or close to it. But in the space sector, it takes a long time, while the upfront capital requirement is quite high,” said C.S.Murali, chairman of the cell at IISc. “In India, there isn’t any VC who is a specialist in the space sector, but a few have started making investments in the sector.”

India’s space adventurers hope that the government will provide helping hands until the funding ecosystem scales up. “We have been requesting a production-linked incentive scheme, tax holiday and no bidding for spectrum allocation,” said Lt-Gen (retd) A.K.Bhatt, director general of the Indian Space Association. “The biggest challenge is that return on investment takes a lot of time, and there is a high risk involved. Finances are important and they will come from the private sector, but support from the government is very important.”

The government recently updated the policies related to space communication as well as remote sensing, though there is still no clarity on what a private enterprise can or cannot do. Starlink being told to stop taking pre-orders is a classic example.

But the intent is clear, with a fresh Space Policy and a Space Activities Bill on the anvil and this year’s Economic Survey waxing eloquent about how India is well poised to capture a larger share of the global space tech pie. Prime Minister Narendra Modi put it succinctly: “India has mastered all aspects of space technology, from satellites, launch vehicles, applications to inter-planetary missions. We have made efficiency an important part of our brand. As we move from the information age to the space age, we have to further strengthen the brand value of this efficiency.”