Photo-feature: A peek into the world of cryptomining

A miner shops for graphics cards at Super Computers and Laptops, a speciality computer hardware shop on Bengaluru’s S.P. Road.

Kishan Rajpurohit, owner of Super Computers and Laptops, attends a customer call inquiring about the availability of graphics cards. Cryptominers are flocking to his shop.

A miner using an ASIC miner he brought into India in his luggage from Malaysia. ASIC (application specific integrated circuits) is a method in which a smaller machine can mine a specific cryptocurrency.

Zeeshan Raza cleans one of his solar panels. He mines sustainably as the massive electricty consumption of mining is damaging to the environment.

Arvin Chinsalkar is an astrologer from Palahalli village in Mandya district, Karnataka. The lime-washed walls of the 26-year-old’s tiled home have turned black from the smoke rising from the homa kund in the middle of the hall. When people come to him seeking solutions—mainly, ways to improve their finances—he gives them cryptic yantras.

Unlike the walls of the hall, Arvin’s room is painted in accordance with the vaastu shastra. The room, where he meditates daily, is quiet except for the whirring of countless minifans from a strange contraption sitting under the painting of a raging bull. The minifans also emit colourful lights and radiate heat. The machine runs 24x7, and improves Arvin’s finances. It is a cryptocurrency mining rig.

The mining rig solves complex mathematical problems. Every problem it solves approves cryptocurrency transactions on a global network. This is part of a public book-keeping process; the ledger is called blockchain. Miners are individuals who dedicate a computer to the process. As reward for keeping the public ledger alive, they get a transaction fee and a minuscule part of new cryptocurrency. 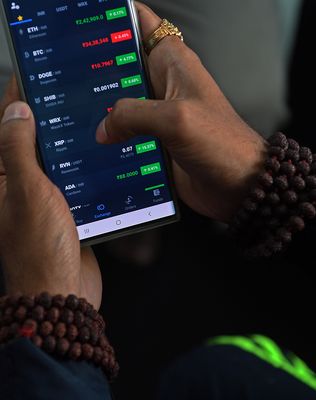 Indians are increasingly joining the growing community of cryptominers. But, mining requires heavy computing power. This has created a demand for graphics processing unit (GPU) cards—hardware that accelerates computing. A mining rig requires many GPUs. Kishan Rajpurohit, owner of Super Computers and Laptops, on Bengaluru’s S.P. Road, says that miners have replaced gamers as the main consumers for GPUs and are ready to pay double.

However, the demand has fallen since January 2022, says Kishan. “Because of the fall in prices of cryptocurrencies after rumours of a ban, followed by the war in Ukraine,” he says. “But, there are people who are accumulating crypto for the future. They continue to mine despite the fall in value.”

For Indian miners, Ethereum is the favoured currency. This is because the availability of mineable Bitcoin is reducing. It is limited to 21 million, of which only two million are left.

Shakeeb Ahmed, 30, a computer hardware engineer in Bengaluru, started mining two years ago with an investment of 050 lakh. He has turned a profit and has established a company called Wingz Digital with his friend Shoaib Ahmed. They build custom mining rigs for individuals who wish to start cryptomining. “I have no intention of selling crypto assets,” says Shakeeb. “The longer I keep them, the more valuable they become.”

One thing common between mining the earth and cryptomining is environmental damage. Cryptomining increases electricity consumption massively, thereby contributing to the increase in greenhouse gas emission. But, there are miners like Zeeshan Raza who use sustainable energy. Zeeshan lives in Gauribidanur, one of the hottest areas in Karnataka, and uses the climate to his advantage. He has set up 30 solar panels and 24 batteries; they produce around 6kw of power, which is enough to run his 31-GPU rig.

“A penny saved is a penny earned.” This quote is attributed to Benjamin Franklin, the man whose portrait is on the $100 bill—the highest denomination currency in the US. The polymath played a key role in the study of electricity. Now, electricity is playing a major role in changing the concept of money. But, while electricity evolved with contributions from the likes of Franklin, money is evolving with the participation of the common man—Arvin, Shakeeb, Zeeshan and millions of other miners.