Business: Luxury carmakers are betting big on electric in India 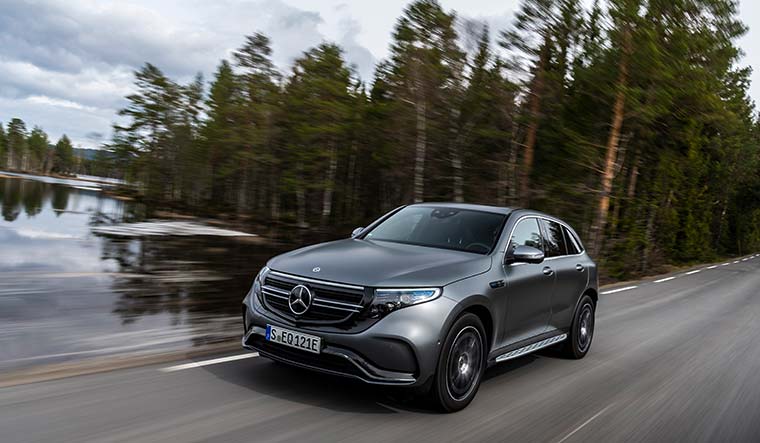 THE E-TRON IS ONE HECK of a ride, even for an Audi. The sports utility vehicle is quick, sporty and luxurious. It can race from zero to 100kmph in just 6.8 seconds. And, it is loaded with all the bells and whistles you would expect in an Audi.

The e-tron, launched in July, is the German carmaker’s first electric vehicle in India, and it joined an impressive fleet of EVs that luxury carmakers are showcasing in the country. The first luxury EV to come to India was from Mercedes-Benz—the EQC electric SUV, last October. In March, Jaguar Land Rover launched the Jaguar I-Pace SUV.

Mercedes, the runaway leader in the Indian luxury car market, said on September 9 that it was expanding the retail sales of the EQC from the six metros to 50 cities. The first batch of EQCs allotted to India sold out; Mercedes is accepting bookings for the next batch.

Mercedes unveiled the EQS luxury electric sedan earlier this year. A derivative of its top-of-the-line S-Class, the EQS is likely to make its way to India next year. “The EQS sets a new benchmark in the luxury EV segment globally. It is surely a strong potential product for the Indian market,” said Martin Schwenk, managing director and CEO of Mercedes-Benz India.

These may be baby steps for the luxury carmakers in the EV market, but they seem to be ahead of the mass-market players. India’s largest carmaker Maruti-Suzuki, for instance, is yet to launch an EV. It has been testing an electric Wagon-R. Mahindra has been working on many models, but has managed only one on the road (the eVerito). Hyundai has one model (the Kona), Tata Motors has two (the popular Nexon EV and the recently launched Tigor EV) and MG has one (the ZS EV). And, that is it.

On the other hand, luxury carmakers are rapidly scaling up and setting definite targets to become all-electric. Mercedes, for instance, has announced it would go all-electric by 2030, where market conditions allow. It plans to launch only EV architectures from 2025 and there will be an electric variant available for all its passenger vehicles. “The tipping point is getting closer,” said Ola Källenius, chairman of Daimler AG and Mercedes-Benz. 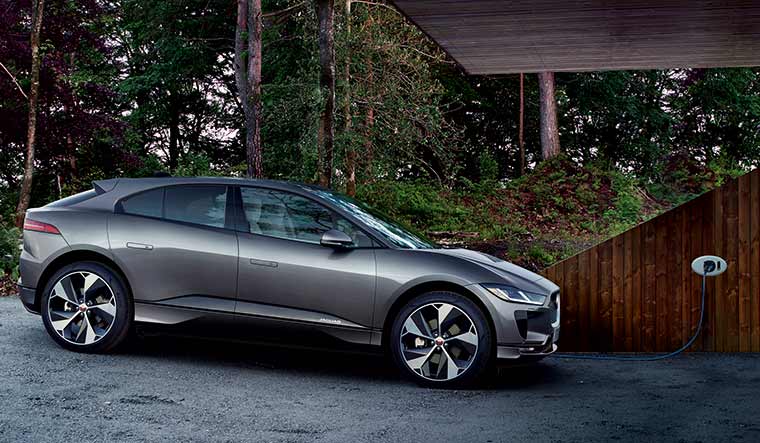 In India, EVs account for a small share of the passenger vehicles market. In the last financial year, 4,588 electric four-wheelers were sold; it was just about 3,000 a year earlier. In contrast, the overall passenger vehicle sales last year was 27.11 lakh units.

India may not be ready yet to wean itself off fossil fuels, but luxury vehicle makers are optimistic about improving demand for EVs. “It would be fair to state that the EV industry is evolving in India and volumes may increase multi-fold in the coming years,” said Balbir Singh Dhillon, head of Audi India. Globally, Audi has plans to launch only EVs from 2026 and will stop manufacturing petrol and diesel engines from 2033. In India, it is aiming for 15 per cent of its sales from EVs by 2025.

Electric vehicles’ green quotient is a big draw for the potential customers of luxury vehicles. “There is a growing concern around pollution in cities and overall environmental sustainability, which is triggering the demand for EVs,” said Rohit Suri, president and managing director of Jaguar Land Rover India. “The 21st-century luxury customer is also keen to adopt the latest in technology, and EVs are absolutely at the top of the pyramid in this aspect.” 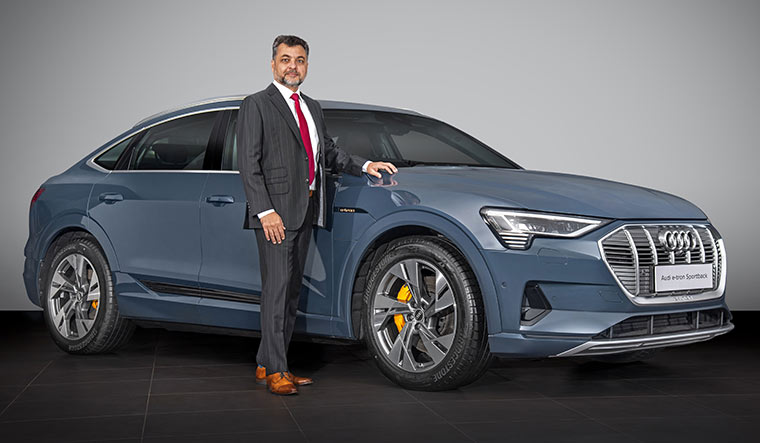 Jaguar is planning to become an electric-only brand in four years. Also, 60 per cent of Land Rover SUVs globally will have zero-emission powertrains by 2030. Suri said that JLR’s India strategy would align to the global plans.

Swedish luxury carmaker Volvo will phase out diesel offerings by the end of this year. The company plans to launch the electric XC40 Recharge in India soon and one new EV each year from 2022. “We have the ambition to achieve 80 per cent of our sales from electric cars by 2025, and by 2030 Volvo Cars will become an all-electric car company,” said Jyoti Malhotra, managing director, Volvo Car India.

What makes luxury carmakers think that the tide is turning in favour of EVs and go ahead with grand plans even as the wider adoption of EVs in India is way behind global markets? 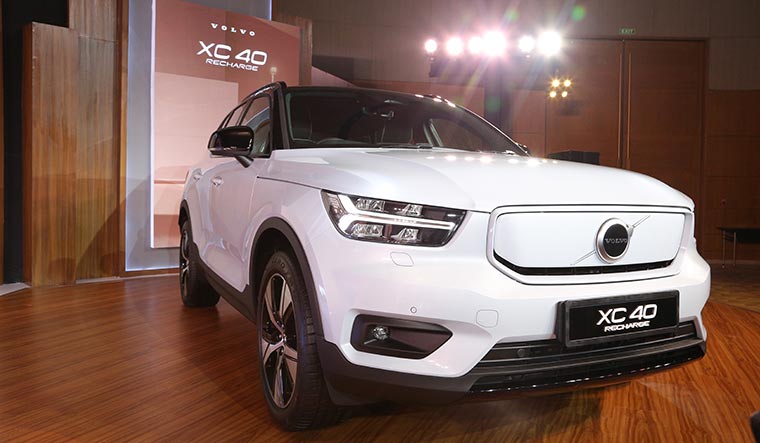 A key is the percentage price differential when one is looking to shift from a petrol or a diesel vehicle to an electric car, said Rajeev Singh, partner and leader, automotive sector, at the consulting firm Deloitte. “A luxury car is already in a certain price bracket. At that price bracket, while moving from an internal combustion engine to electric, the increase in price as a percentage is comparatively less than price increase in a compact car.”

A key issue that is hampering a big shift to EVs in India is the limited charging infrastructure, even in big cities. Currently, there are fewer than 2,000 charging stations in the country. “Charging anxiety remains one of the key feedbacks of early adopters of EV in India,” said Schwenk. 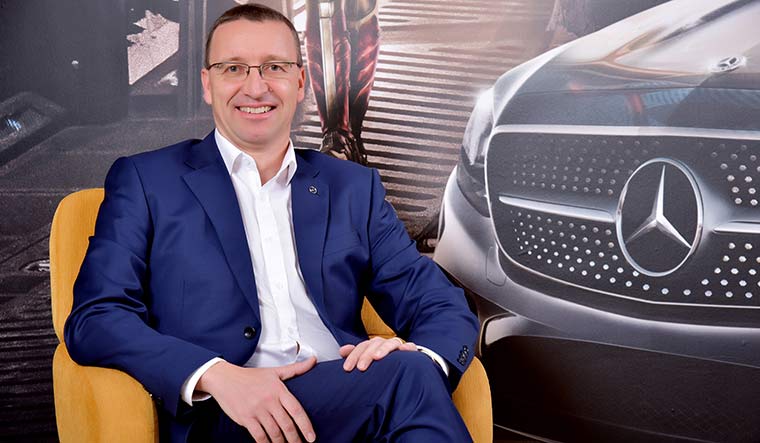 And, the carmakers are sharing the charging infra. Mercedes has opened up its 100 charging stations to Audi and Jaguar. Collaboration is going to be very important since the cost of infrastructure is very high, said Singh of Deloitte. “If each company decides to be completely independent, then it will become a big challenge. That is where the government effort is going to be important. There can be some way where there is more amount of standardisation that happens,” he said.

Luxury EVs can afford to pack in higher capacity batteries compared with mass-market EVs that need to keep costs in check. The Audi e-tron 55, for instance, has a 95kWh lithium-ion battery that gives a range 359-484km on a single charge. The Jaguar I-Pace has a range of around 470km. The Mercedes EQC can go up to 450km on a full charge, said Schwenk.

Governments have been looking to incentivise electric vehicle usage. The goods and services tax levied on EVs is 5 per cent, compared with 28 per cent on petrol and diesel vehicles. However, some of the components in EVs are still taxed at 18-28 per cent.

The EV push by luxury carmakers comes at a time when Tesla, the global leader in electric vehicles, is scaling up rapidly in markets like the US, Europe and China. Tesla is planning a launch in India and to set up a plant in Karnataka. “We want to do so, but import duties are the highest in the world by far of any large country,” said its founder, Elon Musk, earlier this year.

The import duties on EVs are same as those on petrol and diesel cars. “The customs duty does not differentiate whether you are importing an electric car or an ICE car. That is why some of the companies are making a business case to say these should be treated differently, because one is a cleaner vehicle as compared with the other,” said Singh.

The import duty on completely built cars is around 60-100 per cent. One reason behind the high duties is that the government wants automakers to make in India. Luxury EVs, despite the growing sales, are far away from a stage that will make a case for local production. “To set up even an assembly plant, you need a certain minimum volume. The overall luxury car market is small at 35,000-40,000 units today. A small percentage of that will become EV and the volume will get divided among a few players. So, none of them will have the business case to set up an assembly facility in India, unless the volumes go up,” said Singh.

The hope is that the many launches in the luxury EV space will help generate enthusiasm among potential customers who would demand more affordable products. Once volumes gain traction, costs will reduce and the charging infra will expand, helping the luxury EVs to gain momentum and, in turn, drive the wider market.