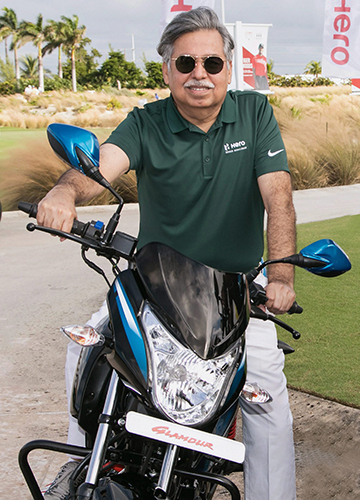 IT IS ALL IN A NAME, all in the family, but all is not well.

A tussle over the ownership of the Hero brand is hotting up between two branches of the Munjal family, and at stake is the future domination of India’s two-wheeler market—the biggest in the world.

Naveen’s side of the family runs the electric two-wheeler business with the Hero branding. It is the leader of the nascent segment, with a market share of 36 per cent and turnover of around Rs350 crore. On the other hand, Hero MotoCorp, headed by Naveen’s uncle Pawan Munjal, has around 37 per cent market share of the conventional two-wheeler automobile segment, and it is a behemoth with a turnover of around Rs31,000 crore.

Hero MotoCorp is now all set to enter the electric vehicle space. Reports indicate that its first launch could happen in six months. The catch is that it might violate a family agreement.

In 2010, a family division initiated by patriarch Brijmohan Lall Munjal, who founded Hero Group along with his brothers Dayanand, Satyanand and Om Prakash, had divided various areas of the business among four branches of the family. There was no restriction on one side of the family entering into a business where another family side was present or competing with them—but the right to use the Hero trademark and its variants was given only to one family wing in a specific area of business.

The Pawan Munjal side of the family walked away with the biggest prize then, the fossil-fuel powered two-wheelers. Cut to 2021. Trends, technology, policy and regulation all seem to deem that the sun is setting on the conventional ICE (internal combustion engine) vehicle business, and that the future belongs to environment-friendly technologies. The family partition bestows non-emission (effectively meaning electric vehicles and all such future technologies) to Naveen’s side of the family. Pawan is Brijmohan’s son, and Naveen’s father, Vijay, is Dayanand’s son.

So, Hero MotoCorp’s EV foray throws up a face-off. It has a stake in the Bengaluru-based electric two-wheeler startup Ather, and it has tied up with Taiwan’s Gogoro Inc to set up battery swapping stations across the country and make Evs.

Naveen sees a potential violation of the agreement here. “Anybody can manufacture anything, there is no limitation on that. There is a very strong non-compete on the usage of the Hero branding. For non-polluting, environment-friendly vehicles as we defined it, the ownership of the brand is with our (wing of the) family,”he said.

The stakes are high. ICE two-wheeler sales in India peaked at 2.1 crore in 2019, and they have been in decline ever since. EVs, however, have been capturing more and more mind space. They may still be a blip in the rear-view mirror, but they are catching up. More electric two-wheelers have already been sold in India in the first six months of this year than all of last year, according to the portal Autocar Professional.

“A lot of pieces of the puzzle are in place now,”said Naveen. “The triggers for explosion (in growth) are already thereìThis year is going to be very, very critical.”

In more ways than one, considering how quickly his uncle is pushing his play into the segment. Hero MotoCorp’s deep coffers and marketing muscle make it a formidable challenger, even when it is new to the game. “It is very difficult to predict the market scenario of the future,”said Shriyance Jain, business observer and managing director of the University of Engineering and Technology Roorkee. “Today, Hero MotorCorp is realising the possibility of an emerging market alternate to its own and which might, in turn, affect its present market share. If these factors were known earlier, it would have definitely affected the decisions made at the time of separation.”

With the deep-pocketed Ola set to make a big splash entry, and traditional rivals like Bajaj and TVS increasingly shifting their focus to EVs, it might not be a good time for the Munjals to bicker. “They can amicably resolve this issue by dividing among them who will do what, to achieve economies of scale in case both of them want to use the Hero family name on their brands,”said Shiv Shankar Tripathi, assistant professor (strategic management), MDI Gurgaon.

It is still not beyond the realm of possibility that some kind of settlement could be worked out by the first family of India’s two-wheeler industry. And possibly in the drawing room, rather than the courtroom.