Infosys @ 40: Journey of the IT giant 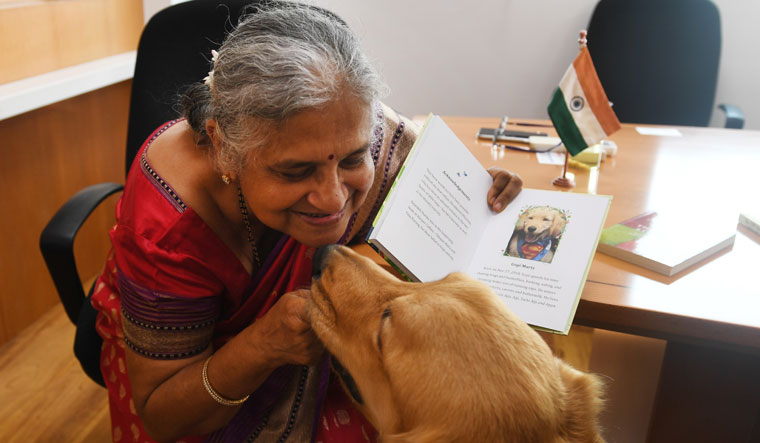 Sudha Murthy, social entrepreneur, writer, teacher and wife of IT doyen N.R. Narayana Murthy, still remembers that April day in 1981 when she handed over her savings of Rs10,000 to her husband. “It was a lot of money at that time,” says Sudha, who was then an engineer with TELCO (now Tata Motors). With that money, Murthy and six other engineers together founded Infosys on July 7, 1981.

“The first headquarters was our house in Pune, near Deccan Gymkhana,” says Sudha. “For us, it was not just a brand or a company, but a thought to change India’s future with software. My husband and the other co-founders thought it was a legal and ethical way to become prosperous.”

In the next couple of decades, Infosys prospered and became a blue-chip firm. And now, on its 40th anniversary, it has a market capitalisation of approximately $79.74 billion and employs more than 2.5 lakh people worldwide. The company’s journey has been both challenging and eventful. And, right from the start, it is teamwork that helped Infosys face the challenges.

Sudha recalls the initial days of the company. “It was like one big family,” she says. “The other founding members completely trusted Murthy as an elder brother and a father figure. When those stationed abroad came to India [for short visits], my husband would ask them not to take any house [for rent] and rather stay with us.”

The challenges to start a company, especially an IT company, in India during the 1980s were aplenty. For instance, importing a computer required multiple visits to Delhi. Bank officials were reluctant to lend to a software business, as they were unaware of it. Getting even a telephone connection took several years.

“On every count, we had lots of friction to do business during the first decade of the company,” says Sudha. “Getting the first customer was very challenging. Brand India did not have a good image outside then. People were very sceptical about any software developed in India. We gradually overcame all those problems through our determination, hard work, discipline and optimism.”

US-based Data Basics Corporation was the first and only customer for Infosys for a long time. “We were small then. The projects were also small,” says Kris Gopalakrishnan, co-founder of Infosys and current chairman of Axilor Ventures. “We initially developed an enterprise resource planning software for their apparel manufacturing package. We had to prove that we can develop world-class software sitting here in India. We would develop the software here and then send its [installation disk] to the United States. It would usually take two weeks to reach the US. The software would then be installed and supported locally in the US. This continued until the communication link [for real-time collaboration] was set up in the late 1980s.”

Sudha recalls another anecdote from the early days. “My husband believed that whatever be the financial situation of the company, we should be able to pay our employees on time,” she says. “The client used to give us a cheque at the end of every month. Once it so happened that there was a delay of a few days. We needed around Rs20,000 to pay the salaries. So, I went to a bank for a loan. I told them they could keep my jewellery as mortgage. The bank officials laughed at me and said that they cannot give money just like that as they have to check for the genuineness of the jewellery. Then they said that there was some overdraft [available], and gave me the money. The officials told me that they did not want to keep my jewelry, but I insisted that they keep it.” Sudha adds that Murthy will not compromise on anything when it came to being ethical. “Once I wanted to make an international call to my husband as he was abroad,” she says. “I needed to speak to him urgently as our son, Rohan, was unwell. I called him from the office. My husband immediately asked me to deposit Rs100 in the office as it was a personal call.” There are other stories, too, about Murthy’s integrity. In 1984, Infosys decided to import a super minicomputer for their overseas projects. But when the machine landed in Bengaluru, the customs officials demanded a bribe. When the Infosys manager who was handling the import informed Murthy about the issue, he asked him to find an alternative instead of paying the bribe. The manager replied that the company has to pay a customs duty of 135 per cent and appeal for a refund. Murthy said: “Do it.”

An interesting fact about Murthy is that he cannot drive. “I used to be Murthy’s official driver,” quips Sudha. But the Infosys founder did know how to drive his firm to the growth track. By the time Murthy stepped down as the company’s chairman in 2011—on turning 65, following the company policy—Infosys had a market capitalisation of Rs1.86 lakh crore.

Data Basics Corporation remained the only client until 1987, but from then the number of customers multiplied. By then, Infosys had set up sales and marketing offices in the US and had started marketing their services directly. “We were the first company to champion the global delivery model and stayed true to it,” says Gopalakrishnan. “At that time, many US companies were also doing software development, but locally. They started adopting this model only after Indian companies had worked hard in debugging it.”

According to Gopalakrishnan, from 1985 to 1987, Infosys had tried its luck with hardware development, too. “We succeeded, but not as [much as] we had hoped for,” he says. “We sold that business. In 1985, we also entered the banking software business with Finacle.” Finacle is one of the top three core banking software packages in the world now. “As an Indian company, we wanted to have some services in India,” adds Gopalakrishnan. “We thought that we would enter the Indian market through a product, and we chose banking to be the industrial vertical to be in.”

Infosys founders were sure that the requirement for custom software would grow and it was a valid business proposition. And, just as they foresaw, Infosys grew very rapidly in the late 1990s until the early 2000s. “Many times we had second thoughts about how things would finally shape up,” says Gopalakrishnan. “In 1989, we got a $1 million offer for the company. Fortunately, we decided to continue.”

Nandan Nilekani, co-founder and non-executive chairman of Infosys, says that over the years, the company has faced several challenges, and came out stronger from each one of them. “I still recall that it took us over two years to get our very first computer,” he says. “Fast forward to today, an age characterised by digital disruption across industries, Infosys is not only re-imagining itself to create more value for its stakeholders, but also helping incumbent enterprises across the world to accelerate their digital journeys.”

Salil Parekh, managing director and CEO of Infosys, says he is very optimistic about the future roadmap of the company. “The opportunity we have on our hands today is a fantastic one,” he says. “A key imperative for success in the digital era would be nurturing and transforming talent. Infosys has always believed in creating a strong foundation for its talent pool through strategic investments in world-class learning infrastructure.”

Rajiv Ranjan, a former Infoscion and founder of peer-to-peer lending platform PaisaDukan, feels that brand Infosys inspired the entrepreneur in him. “Infosys [imparted] me with the strengths of good governance, innovation and community development to start my venture,” he says.

Ranjan adds that the strong foundation laid by its founders has kept Infosys in good stead. “Over the last 40 years, the iconic company has gone through ups and downs, ranging from several international recognitions to sexual harassment cases, favouritism charges and even issues concerning financial frauds,” he says. “The net outcome has ups in its favour owing to the high corporate governance standards that it has set for itself. The fact that the valuation of Infosys has grown from zero to billions and still growing shows that the foundation laid by the promoters has stood the test of time.”