Betting big on faith and hope 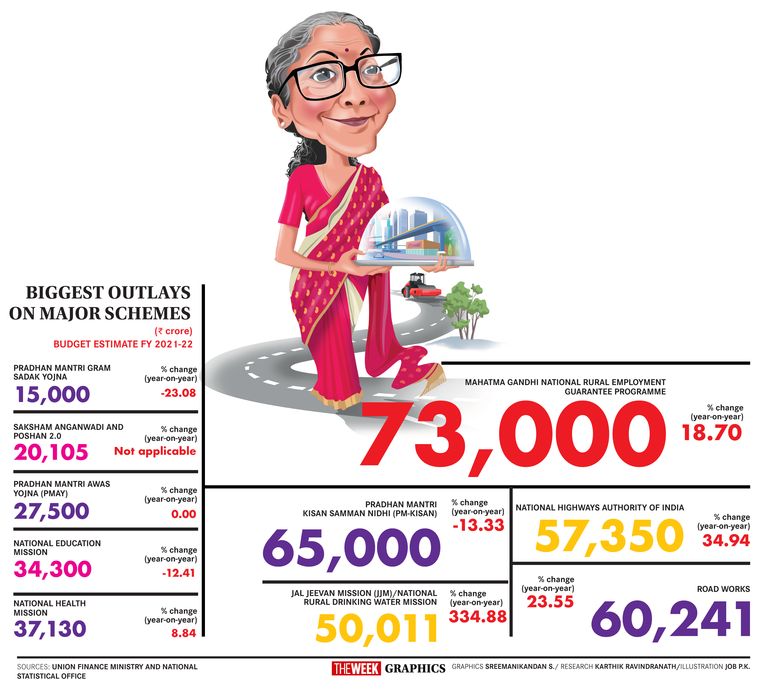 Faith is the bird that feels the light and sings when the dawn is still dark,” said Nirmala Sitharaman in her budget speech on February 1, quoting Rabindranath Tagore. The Union finance minister’s “dawn-of-a-new-era”budget was not just a song, but a full-blown a cappella in crescendo. The Rs34.83-lakh-crore question, however, is, can the orchestra match up?

Even before Sitharaman rose to present the budget, the contours of expectations were clearly laid out—an economy in the throes of a protracted slowdown suddenly buffeted by the coronavirus tsunami, and aggravated by the financial crash-boom-bang triggered by a lockdown. If that was not enough, the epochal churn of 2020 seemed to be leading to irrevocable political, economic and strategic transformations globally. How can the budget boost India’s immunity in this new world?

Enter Doctor Sitharaman. Shedding her prudent, conservative and didactic demeanour, she offered booster shots to all and needy. She loosened her purse strings, with the focus on reviving growth. This involved a hike of Rs5 lakh crore in infrastructure spending—roads, railway freight corridors, bridges and ports. The other areas where she proposed spending big chunks of capital included health (of course!) and agriculture.

“The impetus (was) to give the necessary demand push,”she said later. “That is why we chose to spend big.”Besides spending big, the government’s thrust is to bolster the India growth story by splurging on big projects that will lead not only to job creation and wealth trickling down, but also to pique private investment. 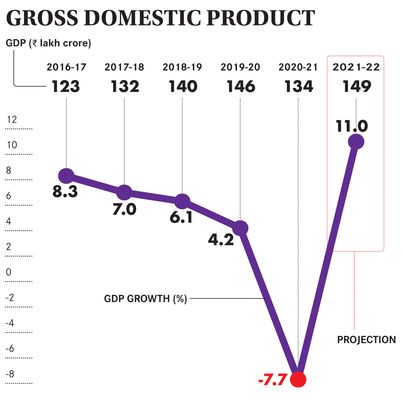 The raising of foreign direct investment in the insurance sector, from 49 per cent to 74 per cent, is likely to lead to further easing of limits for foreigners. For the first time, financial sector public assets, including two banks and a general insurance company, will go under the hammer, besides the eventual initial public offering of the Life Insurance Corporation of India, which was announced in last year’s budget. Pretty significant because no previous government had dared to attempt selling off banks. She refused to name the banks, though.

Unsurprisingly, India Inc could not contain its glee at the thought of all that money coming into the system. “This ‘once-in-a-century’budget…is a great balance of short-term impetus, fiscal prudence and long-term bold vision,”said industrialist Gautam Adani, whose name was mockingly sloganeered by opposition members in parliament when Sitharaman mentioned privatisation of ports. Anil Agarwal of Vedanta Resources said the budget would fast-track growth, create jobs and generate wellbeing. The markets also reacted happily, with the Sensex breaching the 50,000 mark, and international agencies predicting that it will go above 60,000 before the end of the year.

The Narendra Modi government’s eighth budget is probably the most pro-business and pro-reforms, shifting away from the ‘socialist’focus it had maintained for a pro-poor image. “The government has resisted the temptation to fall into the trap of crony socialism,”said Gopal Krishna Agarwal, the BJP’s expert on economic affairs. “The Budget 2021 is pro business, pro reforms. Creating wealth is a prerequisite to sustain the welfare economy.”

A day after the budget, the BJP appointed Union ministers as the party’s election in-charges of these states—Agriculture Minister Narendra Singh Tomar for Assam, Minister of State for Home G. Kishan Reddy for Tamil Nadu, Parliamentary Affairs Minister Pralhad Joshi for Kerala and Minister of State for Parliamentary Affairs Arjun Meghwal for Puducherry. They will function as Modi’s emissaries and keep the focus on Centre’s programmes during campaigns.

Another delicate issue playing on Sitharaman’s mind was the farmers’ agitation. Besides a hike in agriculture credit target to Rs16.5 lakh crore, she scored a political brownie point by reading out the details of the minimum support price paid by the government to the farmers, which was much higher than what the Congress government gave. The announcement of an agriculture cess is supposed to support creation of infrastructure facilities at the village or district level, which would give a signal to farmers that the government was serious about farmers’ well-being.

On the cultural front, Sitharaman announced the setting up of schools for tribals. But her announcement of setting up Sainik Schools with the help of NGOs is in line with the idea of military education with nationalist values, a demand made by some hindutva outfits.

SHOW ME THE MONEY

Sitharaman’s capital expenditure plans in health and infrastructure are pretty grandiose, involving billions of rupees. “This ground-breaking focus on health will provide access to medical care to all in our country, fuel job creation and boost economic momentum,”said Prathap C. Reddy, chairman of Apollo Hospitals Group. 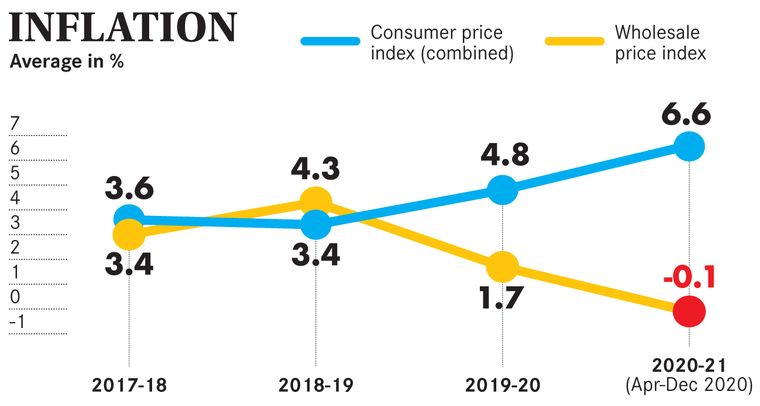 Sitharaman said that there was a 137 per cent increase in the allocation for health and wellness. But the estimate for health ministry last year was Rs65,000 crore, while it was Rs71,000 crore this year. So where is this 137 per cent increase? Experts say the figure can be reached only if you add up the money allocated for related variables that contribute to health, such as allocations for drinking water, sanitation, nutrition and the ministry of AYUSH. “The allocation for drinking water and sanitation is good, but it cannot be added as an increase to show a rise in the health budget,”Dipa Sinha, assistant professor (economics), school of liberal studies, Ambedkar University, Delhi. “The money allocated for Covid-19 vaccination (Rs35,000 crore) also is only a one-time investment. We are still far from the goal of 2.5 per cent of GDP as the health budget.”

The Atmanirbhar Bharat Health Scheme has been allotted 064,000 crore, but it is for a period of six years. Rs1.14 lakh crore has been allotted for establishing seven textile parks, but this will be over a period of three years. The National Infrastructure Pipeline has seen Rs1.10 lakh crore work completed, but the original outlay over the next four years is Rs102 lakh crore. The Development Finance Institution (DFI), which will finance long-gestation infra projects, aims at Rs5 lakh crore, but that is over three years; the capital given this year is just Rs20,000 crore.

One of the few areas where Sitharaman said she was coming clean was on the fiscal deficit figures—the gap between what the government earns and what it spends. This has shot up to 9.5 per cent of the GDP, way more than expected. And it does sound incredulous when the budget says it will be brought down to 6.8 per cent by next year, considering all the massive capital expenses planned.

“Obviously, this is possible (only) by borrowing money, which in turn will lead to much higher deficit numbers,”said Ratish Pandey, business coach, Ethique Advisory. “Any push like what is proposed in this budget will come at a cost and in this case it is inflation (price rise) that the citizens will have to face and contend with.”

However, India Inc, and many economists, feel this is the time to spend and revive without bothering too much about the deficit. “We need to grow our way out,”said Sanjiv Bajaj, chairman and managing director of Bajaj Finserv. Uday Kotak, managing director and CEO of Kotak Mahindra Bank, said it was a bold, big-bang approach, even if we are borrowing. “It’s time to spend…you are creating a long-term asset,”he said.

Ironically, selling off existing assets makes the other prong of the government’s strategy to raise money. The target set this year for ‘privatisation’is Rs1.75 lakh crore. How sound a fiscal measure it is to sell profitable public enterprises is something to ponder over in the long run, and not just for the political hot potato it could be.

MAN IN THE MIDDLE

With all the focus on business and privatisation, and all the lip service to farmers and health care, the average middle class person seemed almost forgotten. There were hopes that personal income tax slabs would be rejigged. “Certainly, a cut in personal income tax rates would have helped,”said Himanshu Parekh, partner and head (corporate and international tax), KPMG in India, “At this juncture, the focus [is] on helping economic recovery through employment generation by accelerating investment in infrastructure. Increasing employment could also improve consumers’purchasing power and thereby spur consumption.”

The rising fiscal deficit leading to inflation could hit the common man badly, though. For the moment, many are rather relieved that the agri cess does not amount to any additional hike in prices, and the much-rumoured ‘Covid cess’did not materialise.

YOU GOT TO HAVE FAITH

While the government has bitten the bait and allotted massive amounts for ‘Atmanirbhar’projects, the key lies in execution. The government’s bet is not just on the trickle down effect of its heavy spending, but also on it enthusing domestic industrialists to expand operations and get foreign capital flowing in. “The finance minister gave an optimistic long-term budget, but the recovery is still very fragile,”said Surabhi Goyal, assistant professor, School of Business, Sushant University, Gurugram. “Looking at the disagreements between central and state governments, civil instability and pandemic affected sectors, the projection of 9 per cent growth is unlikely to be met. With a 4 per cent inflation, the nominal growth rate needs to be 13 per cent, which is unlikely to happen. On the expenditure side, if we assume the GDP growth rate at 13 per cent and deficit at 5.6 per cent, government expenditure will also grow at 18 per cent. Such mathematical modelling is possible on Excel but not achievable!”

It puts into perspective Sitharaman quoting Tagore in her speech. Faith may move mountains, but if it can nudge an economic graph upward is something we will have to wait and watch.