India’s fintech industry is changing the way Indians use money

Vipin still remembers the shiny new card that came by courier. He had grown up gawking at Diners Club card commercials on Doordarshan in pre-liberalisation India. He waited till he started getting a regular income as a lawyer in turn-of-the-century Delhi before hesitantly applying for a credit card. When it arrived, Vipin felt that he had arrived in life as an independent adult of sound financial standing.

But, among the establishments he frequented, there were few which accepted payment via card. And shopping online using a card was then considered financial hara-kiri. Finally, he decided to take his friends out to an uptown restaurant. Not because it was a special occasion, but to just use the card. However, he carried enough cash to cover the expense, in case the card did not work!

Fast-forward to today, Vipin does not think twice before a fintech (financial services using technology) transaction. Once his salary is credited to his bank account via NEFT, he orders his dream mobile phone from e-commerce website Amazon, paying for it using online payment platform Google Pay. He then takes an Uber cab ride, paying for it through Paytm digital wallet, to a restaurant where he pays by credit card. On the way back home, he picks up some groceries, paying with PhonePe UPI (Unified Payments Interface) app. He still carries some cash—it comes in handy for tipping, if not at the neighbourhood cigarette stall.

If the establishment and the multifarious business entities that have driven the fintech boom of recent years have their way, even that cigarette seller could soon be choosing from the many options that these new money ‘changers’ provide; not to mention, the innovations in the pipeline.

The brave new world that fintech promises involves no cash, but a lot of money. In this vision, even queuing up at an ATM, once considered rather ‘modern’, is outdated. While many urban Indians may be familiar with mobile-based payment systems, there are three more categories to fintech, namely wealthtech (investments), lending and insurance.

Fintech broke into the mainstream in the last decade after the launch of electronic bank transfer modes like NEFT, and the establishment of the National Payments Corporation of India (NPCI). It gained prominence in 2016 when the Reserve Bank of India permitted UPI, whereby money could be instantly transferred between bank account holders via a mobile app. Demonetisation gave an inadvertent fillip to mobile money.

During the pandemic, fintech grew leaps and bounds. Except for a minor dip in the first month of lockdown, UPI transactions have been on a steady trajectory in the last eight months or so. In October, UPI transactions crossed the Rs200 crore mark for the first time, up from Rs180 crore in September. October’s transactions were worth a total of Rs3.86 lakh crore.

Invest India, the Union government’s investment promotion agency, calls India the fastest growing fintech market in the world, with an adoption rate of 87 per cent (global average is 64 per cent). Right through the first six months of the year, when the pandemic raged across the world’s stage, an estimated funding of Rs14,000 crore poured into India’s fintech space. 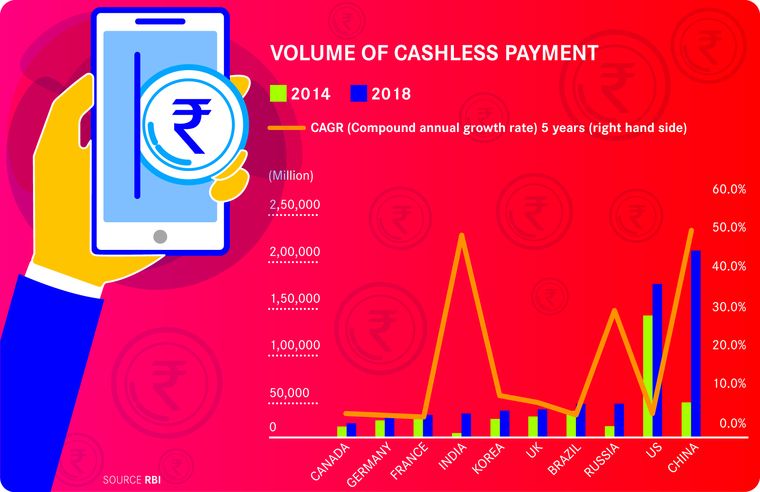 Medici Research’s ‘India FinTech Report 2020’, points out that India had the highest number of new fintech startups, second only to the US. “As India’s fintech matures, there will be huge opportunity for existing as well as new fintech companies to adapt and grow,” says NITI Aayog CEO Amitabh Kant.

However, while Covid-19 has been a catalyst for fintech, it has not blessed everyone equally. Industry insiders say that of the 2,500 or so companies in the fintech space, barely a few hundred are doing well. While the booming payments side has its own cribs on issues like MDR (merchant discount rate, the share from each transaction that the merchant pays to the fintech company was brought down to zero by the government in 2019), there are bigger problems on the lending side. For example, in November, Google announced it had removed five Indian fintech apps which were into lending from its PlayStore. There were allegations that these apps were charging high interests, using strongarm tactics and were operating unregulated.

“The outlier across the four segments of fintech, ‘lending’ came across as extremely unprepared,” admits Naveen Kukreja, co-founder and CEO of PaisaBazaar, a loan platform. Unprepared to adopt presence-less processes like e-KYC and digital assessments, lending came down to almost zero when lockdown hit. “Last [few months] lenders have scrambled to figure out how to prepare for a physical distancing scenario,” says Kukreja.

The other big challenge is technology—it can throw up challenges for the existing players with every new innovation. “Building trust is critical with new technology, especially disruptive ones, [as] it can be challenging to get early users on board and to trust the brand,” says Sanjay Doshi, partner and head (financial services), KPMG in India. Sethurathnam Ravi, economist and former chairman of the Bombay Stock Exchange, adds: “Tech changes can be very fast. The sensitivity of the business to deal with anything untoward is important.”

Perhaps the biggest challenge, or opportunity, depending on how you look at it, is low penetration. India is still a cash-dependent nation, with cash-in-circulation averaging around 11 per cent of GDP (except during the demonetisation days). As per the RBI, India is more cash-dependent than other major Asian economies like China, Japan and Singapore. According to a study by the Internet and Mobile Association of India, the adoption of digital payments is 44 per cent in urban India and 16 per cent in villages and smaller towns.

Authorities hope a dramatic move called Umbrella Entities (UE) can help. The RBI announced recently that any company with a net worth of Rs500 crore and three years experience in digital payments can become UEs upon regulatory clearance, thereby becoming updated versions of the NPCI, which has a monopoly in the space.

“The for-profit structure of the UEs would speed up and bring stronger incentives for product development, innovation and upgrades,” says Doshi of KPMG. “However, the regulator will need to ensure that the prices of payment products and services remain competitive and end-users are not affected.” As per an RBI policy paper, the entry of new entities would impart financial stability to India’s burgeoning digital payments ecosystem. Indian giants like Jio and Airtel, and Big Tech could make a play for this.

Some of the upcoming trends, according to experts, include the likes of neobanks, which could disrupt the traditional banking sector. “More like an online banking service, neobanks will act as a bridge between traditional banks and smaller customers,” says Ravi.

Other upcoming innovations include contactless payment and digital onboarding (acquiring new customers online), using digital assessment, biometric authentication and voice or facial recognition payments. Also in the offing are aggregators providing a range of products, micro services and peer-to-peer services that might include lending and community insurance.

The advantage of digital means there would be a lot of branching out. Take Paytm for example. “We are looking beyond payments,” said Saurabh Jain, vice president, Paytm. “We have started experimenting with lending. We want to create a lending mechanism. We’re using technology to predict whether a person should be given money or not.” On the anvil for Paytm is anything from helping merchants with their GST filing to replacing the QR Code sticker by incorporating it in the images of deities most shopkeepers keep!

On his last visit to Singapore, Prime Minister Narendra Modi spoke of making economic access more democratic. “With the power of fintech and the reach of digital connectivity, we have started a revolution of unprecedented speed and scale,” he said. Beyond all the metrics of funding, expansion and innovation, the real goal in front of Indian fintech is bigger and more basic—financial inclusion.