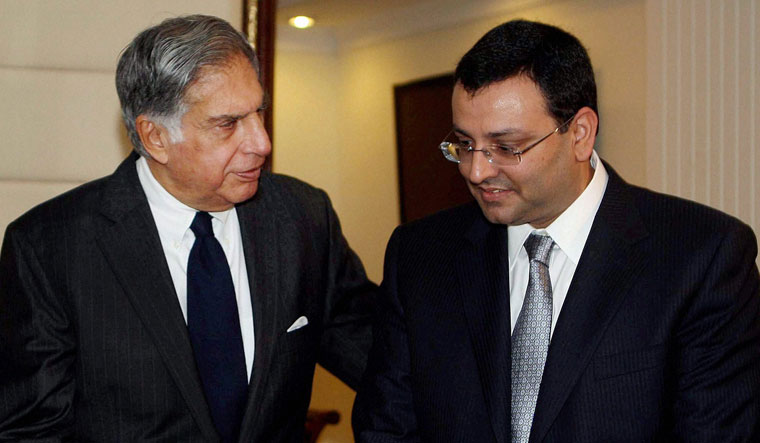 December 18, 2019, was a day of celebration for Cyrus Mistry, who had been sacked unceremoniously as the chairman of Tata Sons in October 2016. The National Company Law Appellate Tribunal (NCLAT) had ruled that day that the sacking was illegal, and he would have to be reinstated as the chairman of Tata Sons. The NCLAT verdict sent shockwaves through Bombay House; the Tatas did manage to get a Supreme Court stay on the order a few days later.

The Shapoorji Pallonji Group (SP Group) owned by the Mistrys had invested in Tata Sons in the 1960s. Reports suggest that J.R.D. Tata was not quite happy with having an outsider in Tata Sons. But the two sides shared a cordial bond over the decades. The relations soured after Cyrus was fired overnight. And it got worse when the Tatas blocked SP Group’s move to raise funds by pledging their shares in Tata Sons.

The Mistrys, who have an 18.4 per cent stake in Tata Sons, needed the funds to tide over the crisis triggered by the Covid-19 pandemic. The Supreme Court has barred the group from selling or pledging any Tata Sons shares until October 28, when it is likely to start hearing the final arguments in the case. This judgment might have been the final nail in the coffin, which prompted the Mistrys to finally decide that the time had come to separate from the Tatas.

The Tata Trusts—which are into various philanthropic activities—hold 66 per cent shares of Tata Sons, which in turn exerts control over a 100-odd companies manufacturing salt to software. The SP Group pegs its stake in Tata Sons at around 01.8 lakh crore. This is based on the value of the operating companies as well as the brand value of the Tatas. The Tatas may not agree to the valuation, and they do have a right of first refusal, according to the articles of Association of Tata Sons. While the SP Group has reportedly lined up institutional investors for the stake sale, the Tatas may not want the shares falling into the hands of a third investor. The Tatas have told the apex court that they are open to buying the SP Group’s stake. However, it is easier said than done.

The Tata Group is also saddled with huge debt, notably in its power, automobile and steel companies. The SP Group in its statement alleged that debt in major Tata Group companies had increased by 01 lakh crore in the last three years. So, buying out the Mistrys may not be so easy for the Tatas.

“It may not be easy for both parties to agree on valuations. It is also not clear how the Tatas are going to raise the funding required to buy the shares,” said Shriram Subramanian, founder and managing director, InGovern Research Services, a corporate governance advisory firm.

Nirmalya Kumar, Lee Kong Chian professor of marketing at Singapore Management University and distinguished fellow at INSEAD Emerging Markets Institute, says Tatas may have to get an outside investor. But who will invest $20 billion with restraints on liquidity and transferability of those shares, he asks.

If the Tatas want to buy out the stakes of the SP Group, there are four major options. “One option is to sell stakes in some companies like TCS; or divest some businesses completely; or raise some private equity funding; or raise some financing over a period of time,” said Subramanian.

Proxy advisory firm Institutional Investor Advisory Services (IiAS) estimates that Tata Sons may have to sell a 16 per cent stake in TCS, which will bring down its shareholding to 56 per cent from 72 per cent. For the past several years, Tata Sons ability to infuse equity and provide liquidity support to its businesses has been driven by TCS dividends and buyback. According to IiAS, the sale of 16 per cent of TCS will restrict the financial flexibility of Tata Sons and somewhat weaken its ability to hold the group together.

“The easiest way for this separation, if you want to do it, is to give them (SP Group) equivalent value of TCS shares, and tell them that they would be free to do what they want with those shares,” said Kumar. “This will resolve around two-thirds of the valuation issue, and Tatas will continue to hold a 51 per cent-plus stake in TCS.”

Alternatively, experts suggest that Tata Sons could sell non-core assets and pledge the equity of its listed companies to raise funds. But that would mean that the group will be deeper in debt. The Tatas may also look at roping in institutional investors to buy out the SP Group stake. Sovereign wealth funds have also been reportedly sounded out.

Exiting Tata Sons by offloading its stake will address the SP Group’s debt woes completely (According to CARE Ratings total reported debt of Shapoorji Pallonji & Company Private Ltd on standalone basis stood at 011,745 crore as on March31, 2019). The decision to separate from the Tata Group has lifted the shares of the two listed companies of the SP Group—Sterling & Wilson, and Forbes & Co—over the past week.

But are these celebrations premature? Time will tell.