In his new book, Bhargava offers a template for working and living

JAWAHARLAL NEHRU and Narendra Modi represent two distinct models of governance, both steeped in their ideological moorings. One common thread in both of them, however, is an emphasis on massive industrialisation for economic growth. While Nehru looked at public sector-driven industrialisation as an engine for social justice, Modi wants to keep the two objectives separate. It is between these two extremes that Maruti Suzuki chairman R.C. Bhargava slots his prescription for making Indian industry globally competitive. In his new book, Getting Competitive: A Practitioner’s Guide for India, Bhargava praises Modi for making the manufacturing process competitive, a key ingredient that was missing in Nehru’s socialist vision.

Bhargava, 85, has a unique vantage point: His first assignment as an IAS officer was in the Uttar Pradesh secretariat in 1956, when Nehru gave a socialistic roadmap for the country. After serving as a bureaucrat for two decades, he spent the following four in building Maruti.

Having experienced bureaucracy from both sides, he suggests that the current cadre management system be changed to a cadre of specialists for industrial and economic management, something which the government is pushing with the lateral entry of domain experts. He goes a step ahead to suggest that the government and industry exchange officers for three years.

Bhargava offers a template which he argues would work for India, which is torn between a socialist past and the capitalist pull—the Japanese way of working and living. He recommends it even for the top management of India Inc. He goes on to discuss other aspects like the role played by reliable supply chains, the need to empower policymakers and the downside of not factoring consumers in policymaking.

The book has come at a time when both corporations and individuals have been forced to hit the reset button and the country at large is focusing on the need to become self-reliant and competitive. As the lockdown-induced humanitarian crisis unfolded, a debate has already started on the ways the government, industry and civil society need to adapt to rewrite the India story. This book is a valuable contribution to that debate. 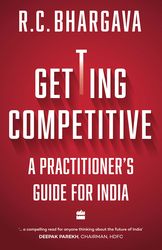 Getting competitive: A Practitioner’s Guide for India