Pie in the sky

On May 30, human space travel entered a new era when a private company, for the first time, launched two astronauts into orbit. The Falcon 9 rocket and the Crew Dragon capsule that carried them were built and operated by SpaceX, a company founded by the billionaire Elon Musk. The launch, the first on US soil since 2011, was not only a reminder of America’s supremacy in technology, but also a prelude to how things might work in the sector in the future.

Space missions are expensive, and they are mostly done using taxpayers’ money. The participation of private players not only takes some burden off the public exchequer, but also gives an opportunity for entrepreneurs. This is exactly why India wants increased private participation in the space ecosystem.

Private companies currently play a minuscule role in India’s growing space business. The Space Activities Bill, on which comments have been sought, promotes commercial activities in space and suggests a regulatory mechanism for them. Interestingly, all this is proposed to be done through the Indian Space Research Organisation. As ISRO itself is a service provider for commercial launches through its subsidiary, NewSpace India Limited (NSIL), many people see a conflict of interest. 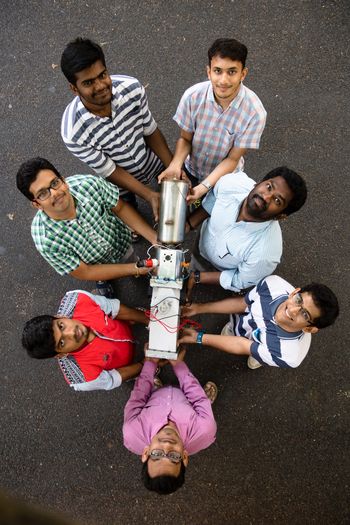 “ISRO has been set up for space research, and is not a regulatory body, with scientists, project managers and engineers,” said Raju Prasad, chief of business development at Satellize, India’s first private company in space technology. “It has done a good job of designing and launching satellites and developing launch vehicles. But that makes good resources in one field a wasted choice for another. Regulators need to be more market savvy and have legal minds that are able to throw open industry with least regulation. Intellectual Property (IP) generated shall be deemed to be the property of the central government. So this seems to be largely about private sub contractors willing to handover whatever IP they develop to the government, rather than any real companies out there developing their own IP and keeping it.”

Private players are not comfortable with ISRO’s opaque nature, either. This leaves limited avenues for private-public partnership, and even the open sectors are limited to contractors acting as outsourced manufacturing units.

While the biggest challenge for private companies in the space segment in India remains getting spectrum allocation and launch permission, there are plenty of other problems as well. “Currently, there are a myriad of problems for satellite builders such as GST, security clearances, orbital slotting, and liability and insurance. Similarly, for downstream companies, there are problems pertaining to data acquisition (you can buy only from or through the National Remote Sensing Centre, even if the satellite is a foreign-owned private asset), making the whole process slow, opaque and expensive,” said Divyanshu Poddar, co-founder of the space startup Rocketeers. “India needs a better map policy and needs to liberalise access to and use of satellite data for private players. In the US, there is a single window clearance for all things and satellite data is freely traded by players like any other commodity. There are no government controls except with data pertaining to national security.”

Encouraging private players to invest in original IP creation can go a long way in improving private participation in the sector. This will help them create their own products and IP, and become independent from ISRO’s supply chain. This will equip these firms to compete in global markets. “There is a lot of uncertainty on what is allowed for private sector and what is not,” said Yashas Karanam, director of Bellatrix Aerospace, a company which works with ISRO. “Since any object sent to space by a nation is governed by International Outer Space Treaty, the liability of a space object would fall on the country that permitted its launch. Hence, there was uncertainty on whether private companies can launch their own satellites and rocket. Now, the space industry hopes to have a predictive policy that would allow companies to operate out of India. With fingers crossed, we are hoping for a business-friendly policy that could ease foreign customers to work with Indian companies.”

Unlike India, most space faring countries have clearly defined space laws, and private companies are encouraged to build their capabilities. They get contracts from National Aeronautics and Space Administration (NASA) and the European Space Agency (ESA) for technology development (both industrial and R&D). Private companies in the US and Europe have access to NASA and ESA test facilities, patents and research grants. “In the US, the Commercial Space Launch Act facilitated the private enterprise of the commercialisation of space and space technology in 1984 itself. In other countries like China, Japan, Australia and the UK, the sector was opened up only in the past few years. Though we are late, it is good to see the government take this initiative,” said Pawan Kumar Chandana, co-founder and CEO, Skyroot Aerospace Limited.

Private players have all welcomed the Space Activities Bill. “The government’s initiative is laudable and in the right direction,” said Narayan Prasad, chief operations officer at Satsearch, a marketplace for the space industry. “However, the mechanics of it are still unclear and needs to be spelt out. There is enough room to review the procurement process and change the base of it to incentivise the industry to invest and create products and services of its own. The emerging startups are looking in this direction and getting established industry players to move in this direction will help these companies service both the local economy and get a global market share.”

Such a system will help private players move up the supply chain to become system integrators. It would also help ISRO become more agile and competitive, especially in the international market. “By offloading all the routine satellite making and rocket building activities to the private players, ISRO can focus on developing cutting edge space technology such as optical communication for satellites, robotic space exploration and removal of space debris,” said Rachana Reddy, a former ISRO space engineer who is now based in Germany. “It would also be able to focus more of its resources on the Gaganyaan mission and engage with other R&D institutions in the country on various aspects of the human space flight.”

Indian space industry is still in the nascent stage, and capital remains a major challenge. “Developing a new product in space industry requires significant investment on test equipment and other infrastructure, which many private players cannot afford,” said Karanam. “[Sharing] ISRO’s facilities will definitely open doors for the rise of India’s name in space, both with ISRO and its private ecosystem.”