Despite stringent measures, Covid-19 is spreading rapidly among pilots and cabin crew 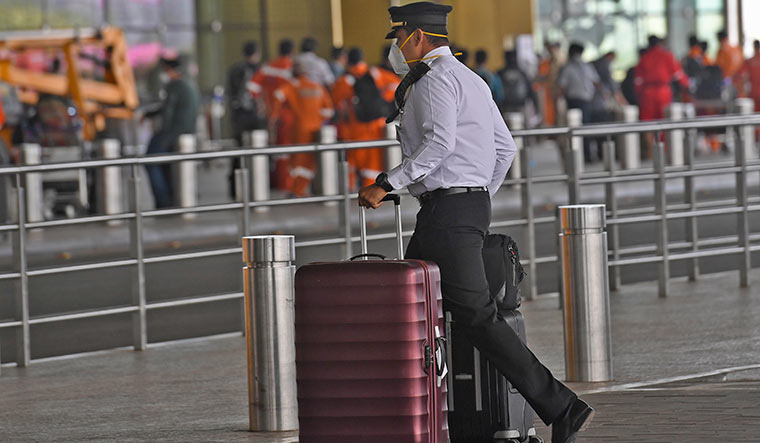 CAPTAIN NAVEEN KUMAR, pilot of an Air India A320, returned home to Mumbai recently after a flight to Jakarta. Though he tested negative in a post-flight Covid-19 test, he said he is afraid of passing on the virus to his wife and two daughters, one of whom is an infant. He has a mandatory second Covid-19 test coming up, but the job Kumar loves has now become a cause for worry.

His fear is justified. Despite stringent guidelines and standard operating procedures laid out by the ministry of civil aviation, incidents of pilots and crew being infected with Covid-19 has increased unabated. Around 50 pilots across the country are learned to have tested positive in the last few days. A 58-year-old Air India pilot, who retired in May, reportedly died of Covid-19.

In the first two phases of the Vande Bharat Mission to repatriate Indians stranded abroad, Air India operated 423 inbound flights, bringing back 58,867 citizens, according to the civil aviation ministry. In the third phase, starting June 10, the carrier will operate around 300 flights to Europe, Australia, Canada, the US, the UK and Africa. Major private airlines, too, have offered their services for the third phase.

Pilots said that the current protocols are not enough, though they have separate entry and exit gates and hardly interact with passengers. An A320 pilot, who has been flying regularly for the last month, said: “We cannot use protective headgear because we use our headset to communicate.” He also asked how the microphone could be disinfected and added that pilots use the same toilets as passengers.

An office-bearer of the Indian Commercial Pilots Association (ICPA) said that for one Vande Bharat flight, pilots undergo three tests—pre-flight, post-flight and on the fifth day after landing. Most cases of Covid-19 are reported in the third test. However, the government is not following a similar procedure for the domestic sector, which was greenlit with effect from May 25. “Some pilots who come back after Vande Bharat [flights] are being asked to fly domestic flights without taking the (third) test,” he said. “By doing this, authorities are putting cabin crew and passengers at risk.” On May 30, a Delhi-Moscow Air India flight was forced to return midway after the ground team realised that the pilot was Covid-19 positive; there had been an error in the pre-flight test report.

Meanwhile, Captain Deven Kanani, 51, a pilot with Air India, moved Mumbai High Court alleging that the national carrier is not maintaining social distancing norms. Kanani, who flew to Shanghai twice, on April 29 and May 10, and brought back medical supplies and equipment, has submitted photographs of a flight between San Francisco and Mumbai on May 14, showing all seats occupied. The directorate general of civil aviation’s order on March 23 had said that the middle seat should be left vacant. During the last hearing on May 22, the government informed the High Court that the new circular, dated May 22, issued while permitting domestic flights, does not say the middle seat needs to be empty. It stated that the May 22 order supersedes the March 23 order. Kanani’s lawyer Abhilash Panickar said that “based on information provided by the solicitor general of India during the hearing”, the spread of Covid-19 was 36 times more during air travel.

In response to Kanani’s petition, the government said that the Vande Bharat flights brought back Indians from countries with a higher prevalence of Covid-19, and, therefore, higher rate of prevalence was likely among the passengers of those flights. “There is nothing to indicate that the passengers contracted Covid-19 during and onboard the Vande Bharat flights,” the government’s reply stated.

Manish Mehta and his wife Payal, both cabin crew, have been flying regularly for the last one month. “Who is going to look after my (six-year old daughter) when I am in quarantine at my place and my husband is flying?” she asked. “Social distancing is not being maintained. Airlines are only looking at the commercial aspect. We risk our lives to perform our duty, but many of us face trouble from neighbours. One of my colleagues has been given notice to vacate the flat.”

A senior cabin crew member—who lives with his wife, three kids, and a father who has undergone kidney transplant—said that crew have been testing positive at an alarming rate, in spite of all safeguards. “Mumbai alone has seen over a dozen cases of cabin crew testing positive,” he said. Reportedly, around 200 crew members are either Covid-19 positive or have been quarantined after passengers on their flights tested positive.

With the resumption of domestic flights by private airlines, there have been cases of pilots getting infected during routine simulator training sessions. Early this month, a Vistara spokesperson admitted that two of their pilots had tested positive after flight simulator training.

Interestingly, despite the challenges, there are also those who are thankful that they were able to keep their jobs. Said a pilot: “People are grateful for having their jobs, [rather] than [worrying about] putting their lives at risk.”

Pilots and cabin crew have been given fictional names or left unnamed to protect identities as they are not authorised to speak to the media.