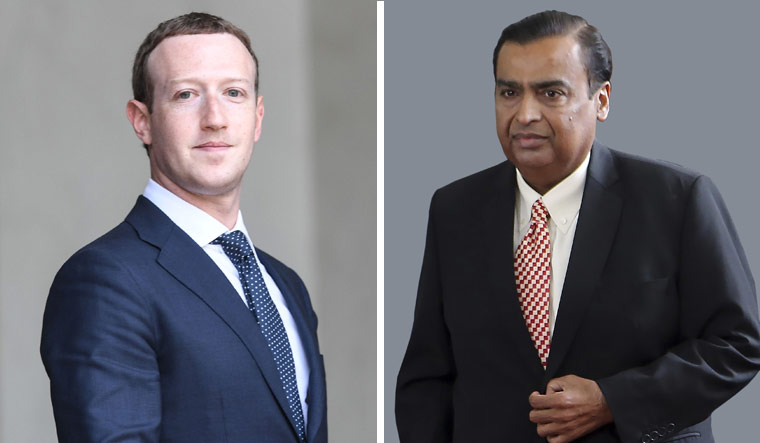 Stand in front of the mirror. Scribble ‘oil’ in upper case on a piece of paper and hold it up. What do you see?

It is an urban legend in the corridors of India Inc that Reliance Industries chairman Mukesh Ambani came up with the name ‘Jio’ for his company’s shift into digital economy from the mirror image of what has long been its core competency—oil and its derivatives, from polyester to petrochemicals. And last week, to ensure that the Ambani legacy outlives its original golden goose, he accepted a friend request from Facebook, worth nearly Rs44,000 crore, for a partnership that promises to upend the Indian business scape.

“Together, our two companies will accelerate India’s economy,” said Ambani. “Our partnership will be a great catalyst to make India the world’s leading digital society.” Facebook founder Mark Zuckerberg explained further: “We are going to work together on some critical projects which will open up a lot of opportunities for commerce in India.”

The binding agreement between Mark and Mukesh is technically for a minority stake of barely 10 per cent in Jio. But the optics are resounding—this is one of the biggest foreign direct investments in India, and it is significant considering it materialised during the peak of a global lockdown. Going by the valuation, Jio is now worth about Rs4.6 lakh crore, making up about half of the total Reliance kitty. For Zuckerberg, known for gobbling up competition or those with technologies he takes a fancy to (remember Instagram and Oculus Rift?), bagging a non-controlling share in a company is in itself against his modus operandi. The generous valuation of Jio platforms is his biggest investment since Facebook famously bought WhatsApp six years ago. So, what was the lure?

If you do not mind the hyperbole, the reason is simple—world domination.

Facebook is the biggest social media company in the world. Its WhatsApp messaging service, with 40 crore users in India, is a byword for information and communication in the country. While Reliance is India’s largest corporation and Mukesh the richest Indian in the world, Jio is the biggest telecom operator in the country, even as its rivals struggle under massive debts. Together, they make a formidable force.

“Facebook and Jio will try to leverage each other’s user bases by driving synergies between the two platforms to target more than 500 million users which they might currently share among both the platforms, and target the next 300 million new internet users in India over the coming few years,” said Tarun Pathak, associate director at Counterpoint, a leading telecom and tech market research firm. “Combining it all gives you a comprehensive advantage, a potential to create a formidable entity,” said Professor Davinder Singh, assistant dean at the School of Management at BML Munjal University.

Ambani had been talking about kiranas and ‘new commerce’ for two years now. Jio’s reach, Facebook’s tech prowess and WhatsApp’s pan-India accessibility can catalyse its scaling up to his liking. “The IT synergy Jio can get from Facebook cannot even be imagined,” said an equity adviser. According to a Motilal Oswal Institutional Equities report, “the renewed focus on the Jio app ecosystem and the grocery backend would open up multiple new e-commerce opportunities as the company plans to leverage JioMart and WhatsApp to enable small Indian kirana stores to transact digitally with their customers.”

It is a win-win for both. Reliance was hoping to get rid of its Rs1.53 lakh crore debt by next year. The original plan of selling 20 per cent stake to Saudi Aramco had gone nowhere with the Covid-19 outbreak and oil price drop playing party poopers. The Facebook deal now puts that target back on track. Additionally, the consolidation in the telecom space and JioMart’s rollout will accelerate its drive to make money out of Jio, especially with the assured returns from its petroleum business now being in serious doubt post-lockdown.

For Facebook, the stakes are higher. Shut out of China, the world’s biggest market, it had zeroed in on India as the next best thing. However, it found the going tough, facing the establishment’s ire over anything from its Free Basics plan to offer ‘affordable’ internet, the way it dealt with fake news, its refusal to give keys to its end-to-end encryption, and lately with WhatsApp Pay. While rival Google has stolen a march over it in the UPI digital payment sphere, WhatsApp Pay, which has been on beta testing for years, has not got Reserve Bank clearance. And, despite Facebook Marketplace, Instagram Shopping and the likes, Zuckerberg’s company is yet to make a foothold in the lucrative e-commerce sphere.

“Having Reliance as your local partner helps. Facebook will be in a better position to convince policy makers of their agenda,” said Davinder Singh. Not to forget, the revenue the core ‘new commerce’ business promises.

But never, for a moment, think that the two partners will be satisfied with that. “While they may start with linking kirana stores with locals, do not forget that the two together have access to the data of one-third of India’s population. You can sell anything on such a platform,” said a financial market adviser who did not wish to be named.

Pathak said it might not be limited to just hyperlocal e-commerce. “They are likely to leverage other points going forward,” he said. The JioMart platform could expand to a ‘super’ status then, integrating anything from B2B and health care to learning and entertainment. The many acquisitions made by Jio, from music app Saavn to artificial intelligence firm Haptik, now falls into perspective.

Fintech could be crucial to this. While WhatsApp Pay hopes to go live soon with ‘a little help’ from Reliance, Facebook still has not given up hopes of its digital currency ‘Libra’ becoming a global benchmark. Google Pay and Walmart’s PhonePe dominate the digital payment scene in India, but the government has been calling for a fresh retail payment infrastructure mode called New Umbrella Entity. Draft guidelines were issued two months ago, and it could be ripe for Jio-FB’s picking.

Ambani himself makes it very clear. “In the days to come, this winning recipe will be extended to serve other key stakeholders of Indian society—our kisans, small and medium enterprises, our students and teachers, our health care providers and above all, our women and youth,” he said.

But for that kind of an all-encompassing scaling up to happen, you need to tame the elephant in the room—big data. Facebook India was quick to clarify that data sharing was not part of the deal, but industry watchers are not convinced. “With the kind of integration we are seeing here, there will be some kind of information sharing so that the experience is smooth,” said Pathak. Davinder Singh said intelligently managing data would be much more valuable than all the money that would come in through e-commerce.

While Reliance itself has declared that it would vet the deal through the Competition Commission of India for clarity on the immense data the combined entity will lord over, privacy advocates are already worried. “Any violation of privacy could lead to huge consequences,” said Kazim Rizvi, co-founder of the think-tank The Dialogue and co-chair (public policy) of Indian National Bar Association. “It is imperative that the government enacts a progressive data protection law as soon as possible.”

The Jio-Facebook deal could have a domino effect on other tech players. “Combining technology and mobile platforms allow for synergies and convergence which will be hard to compete against for the companies in pure technology or pure mobile telephony,” said Davinder Singh. If not beleaguered rival Vodafone-Idea, at least Sunil Mittal’s Airtel is unlikely to give in without a fight.

The same can be said about Amazon and Walmart-Flipkart, which dominate the Indian e-commerce space right now. Amazon boss Jeff Bezos had himself talked about investing a billion dollars in digitising small and medium enterprises in India during his last visit. “Google also might have ambitions,” said Pathak. “I won’t be surprised if there are more partnerships in this field in the coming days.”