Cracks in the wall

Last August, Jaipur-based Ruchi Puri signed a management service agreement with OYO Hotels and Homes for a 20-room guest house at the Janakipuram locality in Lucknow. OYO had agreed to pay Rs1.6 lakh every month to her for operating the guest house. After getting the design approved by OYO, for which the company charged a design consultancy fee, Puri started the construction of the guest house and spent some Rs10 lakh for the initial work. However, a while ago, OYO started pushing for a revenue-sharing model or cancellation of the agreement. “OYO has breached the agreement and has no intention to honour it,” she said. “Recently, citing the Covid-19 lockdown, OYO sent an email to me, putting everything on hold. As a property owner I feel cheated. Despite my repeated requests, there has been no concrete response from them.”

Like every hospitality company, OYO is in tremendous stress owing to the Covid-19 pandemic. But its problems had started much earlier—chinks in the business model, complaints by property owners, unsatisfied customers and the side effects of scaling up too quickly. OYO responded to the questions from THE WEEK with a statement from its CEO Ritesh Agarwal, who said the company would be placing some of its employees on furlough or temporary leave in the US and select other markets, and assured that there would be no lay-offs in India. However, salaries of all employees have been cut by 25 per cent for four months starting April. Agarwal said the company’s revenues had dropped by 50-60 per cent.

In an interview with THE WEEK last year, Agarwal had talked at length about OYO’s ambitious plans to become the world’s biggest hotel chain by 2023. He had even undertaken a $2 billion share buyback. But things did not go as planned. Scores of property owners have been unhappy with OYO’s alleged indifference to their concerns. 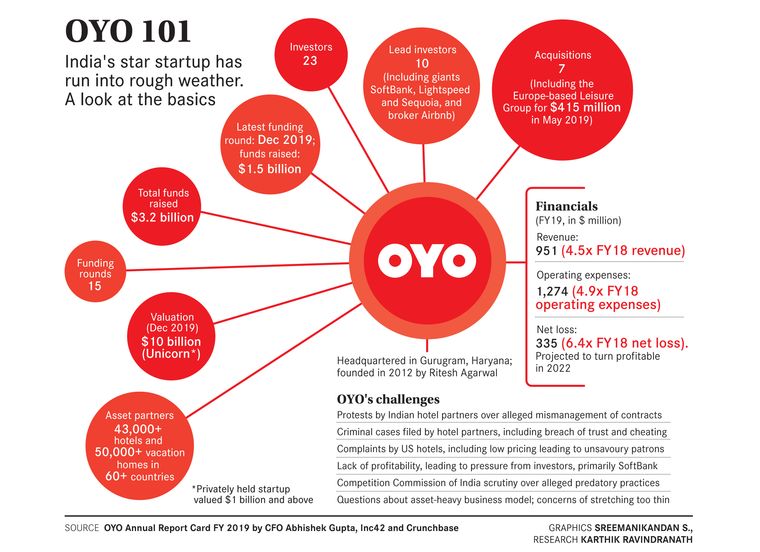 Amitabh Mohapatra, president of the Guest House Welfare Association in Gurugram, has always been a critic of OYO’s business model. In the initial stages, OYO purchased rooms from hotels at fixed prices, which was a lucrative proposition for the hoteliers as they did not have to worry about occupancy, he said. But soon OYO changed the model to a dynamic one wherein the control of the room rates and inventory rested with hotel owners. After that it introduced a minimum guarantee price scheme wherein it took the entire inventory and the responsibility to fill the rooms. “Hotel owners lost their individuality as they were prohibited from featuring their rooms on other booking platforms,” said Mohapatra. “When there was oversupply of rooms, OYO was not able to achieve the target. Then they started penalising hotel owners with hidden costs and did not give the assured minimum amount in full. They started delaying payments and finding excuses in the form of guest complaints, poor service, convenience fees and data subscription fees. These things were not mentioned in the contract agreement.”

Another complaint has been about OYO manipulating prices and artificially controlling demand with fake bookings. “OYO has been indulging in discounting of hotel room rates without the permission of owners and has been charging below cost price and agreed rates. There have been cases of illegal charging of hotel service fees that were not passed on to the hotels. Then there is manipulation of the micro-market rates that forces hoteliers to reduce room rates, so they have more traffic on their platform,” said Nirav Gandhi, executive committee member of the Federation of Hotel and Restaurant Association India.

These problems started aggravating with OYO’s expansion in foreign markets. “Your business model’s few small holes become bigger with unreasonable growth. As economies, India is different from China and both of these are different from the US. These were the three big markets of OYO. This is not a software product where one size fits all. Each market needs to be seen differently and there is no harm going a little slow on expansion,” said Sathya Pramod, former chief financial officer of Tally Solutions. OYO has been facing many labour issues in China, and many hotel owners have exited the platform owing to payment issues.

Pramod said that OYO was in dire need of money. “The sheer size to which the company has grown will need it to raise more money. They have SoftBank supporting them, but SoftBank is going through its own troubles. You will need to put in money, cut on expansion plans and look at manageable growth,” he said.

Experts also suggest a reshuffle at the management level. Kris Lakshmikant, founder of the executive search firm Head Hunters India, said Agarwal should have recruited talent from the hospitality background rather than technical people. “He forgot that OYO was part of the service industry. All the jazz has to be topped with personalised service. Unfortunately for him, many of the establishments he got enlisted were landlords who had no hospitality background. With a lot of money pumped in by SoftBank, the initial battles were easily won. But, gradually, SoftBank realised that money alone does not count,” he said.

Many experts see a big opportunity for OYO in the post-Covid-19 world as a budget option, as businesses are heavily cutting costs. “OYO needs to shrink its aspirations for a while,” said brand expert Harish Bijoor. “It needs to refocus on its first operation that made it glow and shine, the India operation. Focusing on getting the India play back should be its first priority, even as it vacates markets such as China and the US. More funds is a function of focus. More funds is a function of making the model tick in a robust market. India is bound to be one after this pandemic is over.”