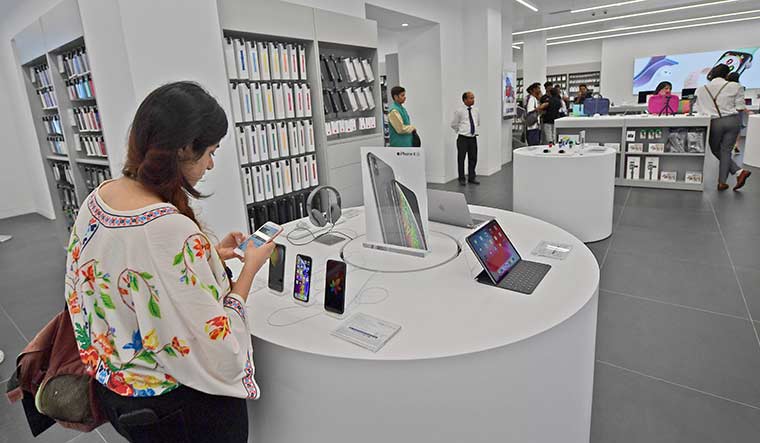 THE FIRST APPLE IPHONE was never officially launched in India. The second generation one, called 3G, was launched in 2008. The iPhone 4 hit the shelves here in May 2011, almost 11 months after it was launched in the US.

These days, however, things are much different, and India is being increasingly talked about in the conference rooms at Apple’s headquarters in Cupertino, California. As a result, newer generation iPhones hit Indian stores within weeks of their launch. This shift comes at a time when sales growth in Apple’s key markets has slowed down as consumers are holding on to their devices for longer. Also, as the trade tensions between the US and China have dramatically risen, the two countries have been slapping import duties on goods worth billions of dollars. This has had an adverse impact on iPhone sales in China, the world’s largest smartphone market. That gives added importance to India, which last year overtook the US to become the second largest smartphone market with around 470 million users.

iPhone sales in China have been falling. In the April-June quarter, Apple sold 5.7 million iPhones there, down 14 per cent from 6.7 million in the same period a year ago, according to data from Canalys. Its market share fell from 6.4 per cent to 5.8 per cent. Globally, Apple’s shipments declined 13 per cent in the last quarter to 36 million. “India is the last market of its size that is still growing,” said Navkendar Singh, research director at International Data Corp (IDC). “Therefore, it will stay on Apple’s radar.”

A study by industry body Associated Chambers of Commerce and Industry of India and consulting firm PwC estimates that the number of smartphone users in India will touch 859 million by 2022, at an annual growth rate of 13 per cent. But, for Apple the going so far has not been that easy. In the January-March quarter, iPhone shipments in India plunged 42 per cent. Apple fought back with promotions and limited-period price reduction on some of its models. “India bounced back,” Apple CEO Tim Cook told investors in a post-earnings conference call on July 30. “During the quarter, we returned to growth there.”

Apple is betting on a revamped retail strategy in India. The company has not been able to open its own stores in the country as it could not meet local sourcing norms. But a reseller, Aptronix, recently opened an 8,000 sq ft store in Mumbai, which aims to offer the same retail experience one would get in an Apple Store run by the company. “Retail experience is very important and Apple is known for it. So, this is a step in the right direction,” said IDC’s Navkendar Singh.

A steep price cut on iPhone XR, one of the three models Apple launched last year, and heavy promotional activities have helped Apple beat Samsung to claim leadership position in the above-Rs35,000 segment, with a share of 41.2 per cent in the second quarter (April-June), says the latest IDC Asia-Pacific quarterly mobile phone tracker. Though Apple did not provide any data on the number of units shipped, Luca Maestri, CFO, said in a conference call that the company grew in “strong double digits” in India last quarter.

The catch is that about 78 per cent of the smartphone market in India is sub-Rs15,000. And, the fastest growing segment is Rs15,000-Rs20,000. Apple’s cheapest model in India, the iPhone 6S launched in September 2015, costs around Rs30,000. So, despite doing well in the premium market, Apple’s market share in India has remained at around 2 per cent.

Neil Shah, research director at Counterpoint Research, said that though the price cut on the iPhone XR helped Apple boost volumes last quarter, in the past two years, its sales had dropped significantly. “In 2017, Apple shipped 3.2 million units in India. Last year, it shipped 1.8 million units. This year, it may struggle to get close to that. This volume drop is a concern,” he said.

One way Apple could reduce prices is by manufacturing locally. This will help the company save on the 20 per cent import duty that India levies. Apple’s supplier Wistron already manufactures the older generation iPhone 6S and 7 at its facility in Bengaluru. Another supplier Foxconn will soon start making the high-end XS and XR at its facility in Tamil Nadu. As Apple increases local manufacturing, it could meet the local sourcing norms and eventually open stores in India.

Shah said Apple is unlikely to pass on all the gains to the customers. “Apple may only selectively pass on the cost savings in the form of price reductions. It could use some of the cash to build its retail footprint,” he said.

India could also emerge as an alternative manufacturing hub to China, Apple’s largest contract manufacturing base. Shah said the company had already started exporting the iPhone 7 from the Wistron facility and may look at exporting to Africa and West Asia from India. “Seventy to eighty per cent of the locally manufactured phones could be exported, while the rest will head to the domestic market,” said Shah.

Apple’s bundled services, like App Store, Apple Music and Apple TV, has steadily been increasing their contribution to the revenue in markets like the US and Europe. In India, Apple has not really focused on the services business and has so far done very little to match the Indian customers’ needs. “Apple would need a sizeable market share to build services,” said IDC’s Singh. “Services like Apple TV could do well in India, if it could tap into local content.”

India could emerge as an alternative manufacturing base to China, supplying to Africa and West Asia