The fresh levies on the rich caused much consternation in the business community, even as the budget sent a clear message that the second Narendra Modi government wants better distribution of economic growth among the masses. A number of schemes will benefit the social groups that voted Modi back to power—the youth, women, and the urban and rural poor.

Sitharaman quoted Swami Vivekananda’s writings about the integral role of women in economic growth as she announced overdraft facility of Rs5,000 each for every member of women’s self-help groups. Women entrepreneurs will now get collateral-free, subsidised loans of Rs1 lakh under the MUDRA Yojana.

In a bid to utilise India’s demographic dividend, the government will focus on imparting new-age skills to the youth in areas like artificial intelligence, internet of things, big data, 3D printing, virtual reality and robotics. “These skills will prepare our youth to take up jobs overseas,” Sitharaman said after the budget.

For small shopkeepers and traders, who are traditional BJP voters, the budget has guaranteed a monthly income of Rs3,000 after they turn 60. The scheme will benefit traders whose annual turnover is less than Rs1.5 crore—which means it will have three crore beneficiaries.

Traders, however, are not very enthused. “We will have to make contributions to receive this pension. This is a small step that can support some, but the real blow is the TDS (tax deducted at source) of 5 per cent levied on cash withdrawals,” said Praveen Khandelwal, secretary general, Confederation of All India Traders.

It was Khandelwal who suggested a pension scheme for small traders during Sitharaman’s pre-budget consultations. He said the new tax on cash withdrawals of more than Rs1 crore a year would hurt small businesses, which paid for services and staffers in cash. “We had sought immediate focus on the cash crunch situation and asked the government for a subsidy for computerising small businesses to deal with competition from online retailers,” said Khandelwal. “None of these requests was granted.”

Concerns abound on the tax front, too. An additional surcharge has been introduced on incomes above Rs2 crore and Rs5 crore at 3 per cent and 7 per cent, respectively. The levy will affect foreign portfolio investors (FPIs), who contribute a major chunk of investments in the stock market. Expectedly, Sensex lost around 1,150 points after Sitharaman presented the budget, as FPIs rushed to withdraw their investments.

The unintended repercussion now has the government in a huddle. “The matter [concerning FPIs] has been brought to our notice. We will discuss it and see what possible solutions could be arrived at,” said P.C. Mody, chairman of Central Board of Direct Taxes (CBDT).

Chief Economic Adviser K.V. Subramanian had earlier cited the importance of attracting private investments for achieving the target of becoming a $5 trillion economy by 2024. Asked about the level of improvement needed in investment levels, Subramanian said the rise has to be a significant one. “Gross capital formation is right now about 29 per cent,” he told THE WEEK. “To match up to most Asian developing economies, including China, this level has to reach at least the 35 per cent range.” The statement means the government could bring some relief to the investor community.

The surcharge has dismayed domestic investors as well. “This will be counterproductive for the big companies and their promoters who might want to take their investments from India to other places with lower tax levels,” said an industrialist. The new levies, according to the industrialist, means that India’s super-rich now fall in the 37 per cent to 42.7 per cent tax bracket—“among the highest in the world”.

Sitharaman, however, remains resolute. “Investors know the growth potential of India. It is now their choice whether they want to tap this growth or not,” she said in her post-budget conference.

Citing data, the government also denied that India has the highest personal tax bracket. “In India, the highest tax slab is at 35.88 per cent,” said revenue secretary Ajay Bhushan Pandey. “But in the UK, this is 45 per cent. It is 45.9 per cent in Japan, 54 per cent in Canada and 66 per cent in France.”

According to Sitharaman, the government’s tax collections have nearly doubled in five years. “Direct tax revenue, which was Rs6.38 lakh crore in 2013-14, rose to Rs11.37 lakh crore in 2018-19. This is a 78 per cent rise,” she said in her budget speech. But tax experts say the figure is compromised, given the government’s low revenues from goods and services tax and direct taxes. Data released by the controller general of accounts show that the government had a net tax shortfall of Rs1.7 lakh crore in the last fiscal.

Sitharaman said gross tax revenue would grow by 9.5 per cent to Rs24.6 lakh crore this year. “This could be an overestimation, given the continuing slowdown in the economy,” said Sandeep Chilana, managing partner, Chilana and Chilana Law Offices. “GST collections are more likely to average at the current levels of Rs85,000 crore a month, rather than go up to Rs1.2 lakh crore.”

A lot is expected from the income tax department. “There is a lack of social contract between taxpayers and the tax department,” said Rupak Saha, tax partner at PwC India. “The complexity of tax compliance bothers smaller firms. Refunds are still unduly held back. All these, if optimised, could lead to a higher tax compliance rate.”

While smaller firms with annual turnovers of less than Rs400 crore would benefit from a lower tax rate, the bigger firms would face a higher tax bill. “Apart from 99.3 per cent firms that are covered under Rs400 crore [benchmark], the remaining 0.7 per cent companies would face tax rates that are among the highest in the world,” said Rakesh Nangia, managing partner and founder of the accounting firm Nangia & Co LLP. “This will have a big impact on the competitiveness of larger firms in the domestic and export markets.”

Experts say the rate hike had been in the offing. “India’s tax on the super-rich was actually low,” said Saha. “One will have to live with it given the need of the nation.” He wants the tax department to incentivise compliance rather than send out notices. “So far, it has been a stick-only approach,” he said.

The government is all ears, it seems. “We are reviewing our assessment processes and including technology big time to make life easier for the taxpayer,” said Akhilesh Ranjan, member (legislation), CBDT. “We have identified some pain points in the finance bill and are reviewing those. The bottom line is to develop trust and cooperation.”

The message of social equity forms the core of the budget. “India’s significant population is still not connected to its growth,” said Sanjeev Sanyal, principal economic adviser. “Ease of living is an important criterion and the government will continue to focus on rural development and infrastructure.”

On the fiscal consolidation front, Sitharaman surprised everyone with a fiscal deficit target of 3.3 per cent, which was lower than expectations. The gross expense of the government was increased 18.5 per cent to Rs27 lakh crore, to accommodate the government’s plan to infuse Rs80,000 crore into infrastructure. “Ultimately, the budget was not only about the distribution of income. It was also about creating economic growth,” said Gopal Krishna Agarwal, the BJP’s national spokesperson on economic affairs.

The government, he said, employed some unconventional methods—like sourcing a part of its borrowings from external markets—to raise capital for its increased social spend. “Domestic borrowings cost the government an interest rate of 7.2 per cent. Globally, this cost is cheaper by 2-3 per cent,” said Agarwal.

In 2015, RBI governor Raghuram Rajan had warned the government against external commercial borrowings, saying they could further weaken the rupee. Agarwal said strengthening the rupee remains a focus. “As the government stops to crowd out the debt market, real interest rates will come down for private borrowers,” he said. “This will strengthen, and not weaken, the rupee in the mid to long term.” 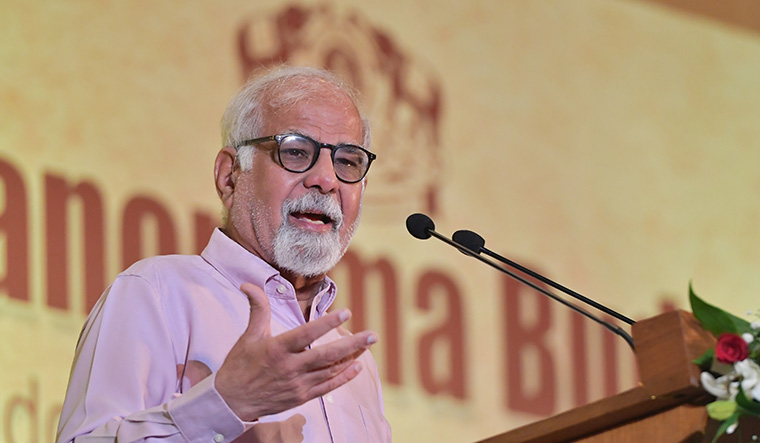 SURJIT S. BHALLA, economic adviser to the fifteenth Finance Commission and a member of the advisory board of the New York-based Observatory Group, delivered the 20th Malayala Manorama Budget Lecture in Kochi on July 8. Excerpts from the speech:

Any country which wants economic growth should give utmost importance to the growth of the agriculture sector. Unfortunately, the sector has been ignored by reforms. The government wants to double farmers’ income by 2022. That means 10 per cent real growth in the income a year, which is not easy. We should stop mixing production and pricing, and allow production to be maximised. Only middlemen and politicians gain from the pricing mechanism.

The finance minister brought down corporate tax for 99.3 per cent companies. She should have reduced it for 100 per cent. Indian industry faces the highest interest rate and the highest effective tax rate in the world.

Squeezing the ultra rich by way of taxing them more is not a smart move. Is the government taxing the rich for the poor? The wealth that needs to be redistributed to the poor has to come from the rich, and wealth has to be created before it is redistributed.

The target of making India a $5 trillion economy by 2024 is a conservative one by any means. Even if India grows below 10 per cent, it is achievable considering the rupee’s movement against the dollar.

This budget was an important one because of the big mandate the BJP got. Expectations were high as everybody considered it an opportunity to take bold measures. Though the budget was good on vision it did not fulfil the expectations.

The future of budget

The budget cannot change indirect taxes because the GST Council decides those. Once India has a direct tax code, there will not be any opportunity for changing that in the budget, either. So the scope of budget will be limited to tinkering with duties.