CLEAN-CUT DOES not cut it any longer. From idols like Virat Kohli and Ranveer Singh to the boy next door, every man now has an entirely different concept about what it takes to look good. Beards of various hues, right from the over-grown 'cave man' look to a designer stubble, have become de rigueur. And, with urban men's propensity to use a plethora of grooming products, from shampoos to face washes and creams, the age of men looking their best, even if not exactly clean-cut, is here.

Cashing in on this trend are a string of startups, who have startled the industry majors, forcing them to sit up and take notice. Take, for instance, Gurugram-based The Man Company. Serial entrepreneur Hitesh Dhingra founded the startup after realising that there were “five thousand” products targetting women's grooming, but barely a handful for men. Dhingra and his partners figured out that Indian men were interested in grooming, but the availability of the right product was an issue. “Men were not only visiting salons more often, but were also getting more services. It was not just about looking good, but also about feeling good,” he says. International trends also showed a steady growth in demand and supply of products for men. The time was ripe. 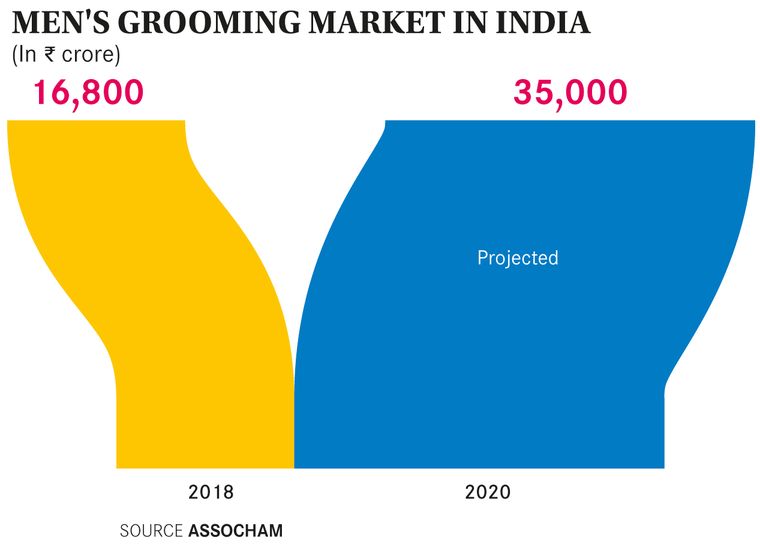 The timing, too. When Dhingra started the operations in 2015, internet connectivity was also booming. Starting off as an online retailer helped him keep the initial expenditure low, and the smart use of social media was a cost-effective marketing tool. “It would have been difficult for us to grow this way, if not for the internet and social media,” says Dhingra. The brand quickly found a connect with discerning men. After making profits in the last few years, The Man Company is on its way to hitting the Rs100 crore revenue mark this year. It has now moved into two more modes of retailing—department stores and a professional line in collaboration with salon chains. “There's a lot of tailwind helping us achieve growth,” says Dhingra.

Ashutosh Valani noticed a growing demand for men's grooming products imported from China while working as a vendor for e-commerce platforms like Flipkart, Snapdeal and Shopclues. “The trend of growing a beard and moustache was already in, but there were no brands to help men with their grooming and maintenance,” he says. So he gave them one. His company, Ahmedabad-based Beardo, is a big success story in this sunrise industry. Its launch products were beard oil and beard wash—products no one else in the Indian market offered till then. The response was so good that it launched more products in the hair, body and styling categories in a few months, and snapped up actor Suniel Shetty as the face of the brand. 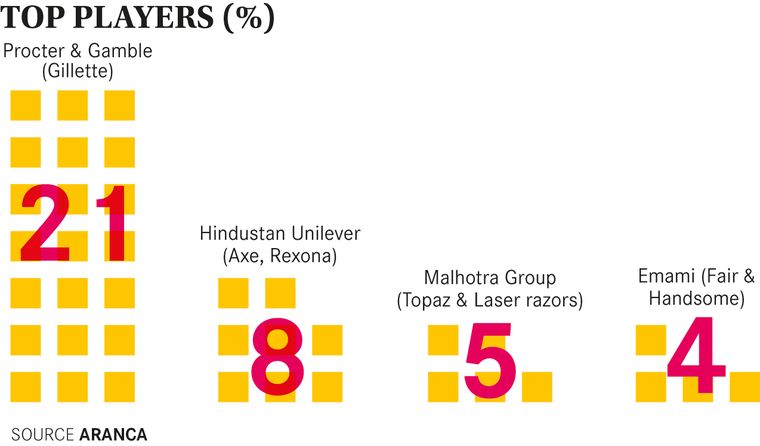 This product strategy was in line with the one adopted by many of the other startups in the segment like Bombay Shaving Company, Dappr, Ustraa and Happily Unmarried—bring out products catering to a need thus far unaddressed by the big players like Hindustan Unilever (HUL) and Procter & Gamble (P&G), and use the online route to cut costs.

This is no mere startup tale or niche urban trend. According to the Associated Chambers of Commerce and Industry of India, the market for men's grooming products is one of the fastest growing product categories in the country, and it is expected to grow 45 per cent to hit Rs35,000 crore in three years. A study released a few weeks ago by research agency Mintel says the average Indian man spends 16 minutes grooming his body, 14 minutes on his hair and 12 minutes on his face. The amount of time rises significantly in the metro cities. 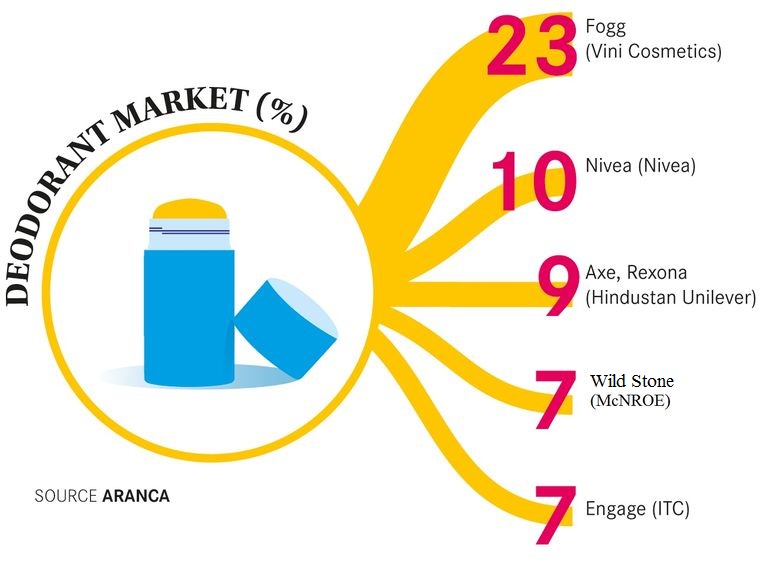 “Men's grooming has been an area of excitement,” says Anupam Saxena, president (beauty) of Shopper's Stop, which recently tied up with many of these brands. “People move around a lot and have greater financial independence. Men and women are interacting more; so grooming garners more attention. This trend is here to stay.”

Spurred by the rosy projections, FMCG majors, too, have entered the fray. HUL has launched a range of face washes, cleansers and moisturisers for men under its Pond's brand, with actor Varun Dhawan as the brand ambassador. Godrej, too, has launched a men's line under its Cinthol brand. “Indian men seek grooming, but do not [want to] complicate the whole process with multiple products,” says Sunil Kataria, CEO (India & SAARC), Godrej Consumer Products.

From Lóreal to Garnier to Nivea, everybody has been launching exclusive men's skincare lines. Almost all top men's deodorant brands, from Axe (an HUL brand) to Wild Stone, have expanded into categories like talcum powder, perfumes and shaving creams. “The men's grooming industry is an untapped market offering opportunity for expansion,” says Narendra Kumar Daga, founder & managing director of McNROE, the makers of Wild Stone products.

Some of the biggies are even picking up stakes in the startups. Colgate-Palmolive bought a 14 per cent stake in Bombay Shaving Company last year, and Marico, which owns brands like Set Wet and Studio X, picked up a stake worth around Rs60 crore in Beardo last year. Marico will take over the company in March 2020. “Marico's acquisition will allow us to expand further into domains we have not penetrated yet,” says Valani.

Kolkata-based Emami, a pioneer in the men's grooming scene, has also waded in, making two rounds of investment in The Man Company. “Men's grooming is a strategic focus areas for Emami,” says Mohan Goenka, director. “Our strategic investment in The Man Company gives us access to tap into a consumer psychographic which is digitally savvy, wants the best in grooming and has the willingness to pay a premium for the finer things.”

Some industry experts, however, consider it as a passing trend, or a boom that could go bust soon. “A lot of the current construct around male grooming considers superficial aspects of 'maleness' such as the age-old masculinity trope that centres on how many women a man is able to attract,” says Kalyan Ram Challapalli, brand expert who heads the consultancy firm Wolfzhowl. Instead of thinking through and crafting brands for men, a lot of them are simply trying to extend existing women-focussed brands into male grooming as well. That will most definitely not work.”

He might have a point. Minu Srivastava, consumer research analyst at Mintel, says that the companies in this field need to “review the motivation and lifestyle patterns of various groups and customise offerings to fit in.” Studies have shown that areas of concern for men include hair loss and hair greying, while most brands primarily focus on cosmetic needs of the millennials and on inordinately high number of products for 'skin brightening', face cleansing and the like.

But there is no doubt that “the growth potential of this segment is huge,” says Gurumukh Uttamchandani, executive director of Syska, which got into making male grooming gadgets after seeing the category’s immense growth. Others agree. “These are still early days with low penetration levels,” says Goenka of Emami. “We expect to see a continued increase in adoption of men's grooming products.”