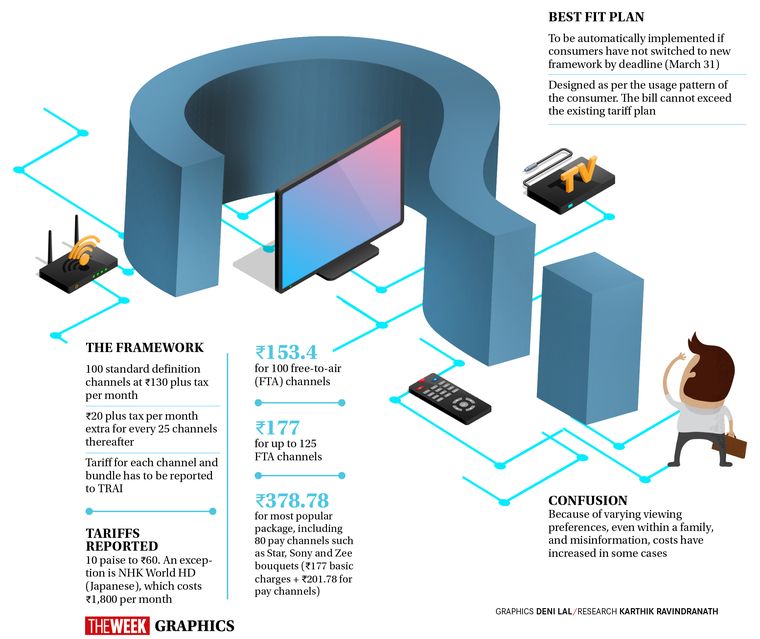 Static. That is the effect the new regulatory framework for broadcasting and cable services has had on Shahina Khan’s business. Khan, 52, is the director of Kaushambi Cables, a last-mile provider for DEN and Hathway cable networks. She got into the cable service sector in 1996, and got her business organised in 2000. She operates from one of the fastest growing areas in the National Capital Region. Today, as her linemen go around giving out and collecting the package selection forms, her business has halved, and the future of her company is uncertain, she said. Neither subscribers nor people in the cable business, she said, are happy with the Telecom Regulatory Authority of India’s new tariff rules.

The idea behind TRAI’s new regulatory framework was to give subscribers the option to pick and pay for channels they prefer to watch rather than pay for packs decided by cable operators and direct-to-home (DTH) companies. Till the revised deadline of March 31, consumers have the freedom to choose 100 standard definition channels within the network capacity fee of Rs 130 (exclusive of the 18 per cent Goods and Services Tax). If the channels exceed 100, they will have to pay Rs20 extra for every additional 25 channels. Consumers can choose from à la carte free-to-air or pay channels or bouquets (several channels bunched together by the broadcaster), but the maximum retail price of pay channels will be added to the bill. TRAI, while reining in cable operators and channel distributors, wanted to bring down the cost per month for households. So, customers, especially families from middle income group and pensioners, rejoiced, thinking the monthly bill would come down. However, even those who selected less than 50 channels found that their bills had more than doubled.

Take, for instance, the case of Renuka Gupta of Vaishali in Ghaziabad. “I used to pay Rs 700 by cheque for every quarter to our DEN cable guy,” she said. “I carefully read and ticked 46 channels from the à la carte section, and it came to Rs 345, including the GST, per month. When he came to collect the package selection form, the cable guy told me our monthly bill would be Rs 570.” She was told that it was mandatory for subscribers to choose one of the five packages before picking their favourite channels. The least priced was Doordarshan’s basic package comprising free-to-air channels that would cost Rs 153.40, including the 18 per cent GST. The cable guy told her to opt for the platinum package—DEN’s costliest—that costs Rs 501.50 and offers far more channels.

While a few people did pick channels that cost them less money, it offers them fewer news and entertainment options. Also, viewing preferences differ even within a family. “Now there is so much happening in terms of news. And, there is cricket,” said Khan. “Women like the soaps, some want to watch food and travel shows. So, to watch what they were watching earlier, families have to pay much more than they used to. And, they are angry and abusing us for no fault of ours.”

TRAI, however, does not concur with that viewpoint. “It is being perpetrated that a consumer family that watches 250 channels will end up paying much higher amount than at present,” it stated. “As per data provided by the Broadcast Audience Research Council, more than 90 per cent of [families] view or flip 50 or less number of channels. Therefore, any analysis that keeps 250 or more channels for pricing of monthly tariff results in creating a false impression.” Also, it stated that if consumers chose the channels they really watched, then they would be paying less than what they used to.

But a careful reading of the TRAI regulations makes it amply clear that the idea was not really to slash channel viewing costs. “As per the new framework, the consumer will get to choose the channels of her or his choice,” read TRAI’s statement. “The freedom of choice will mean direct control of the consumer on his/her monthly bill for television services.” Control over the bill, however, does not make it cheaper.

What the framework does provide for is that free-to-air channels have a fixed price set by TRAI, and cannot be altered by distributors, which was happening until now. The new framework provides for complete transparency on pay channel pricing structure, whereby no distributor can charge above the MRP declared by a broadcaster. A channel distributor explained that the regulations had made it a direct relationship between the broadcaster and the subscriber. “Broadcasters have been saying that they are in the red,” he said. “Now they will be paid the money in advance. They know the exact numbers [of subscribers], and have to compete with quality programmes to beat the rivals. That will be achieved, but at a higher cost to the viewers.” The distributors will have to ensure service, given that the cost of channels will be the same whether it is being provided by DEN, Hathway, Airtel, DishTV or Tata.

TRAI does not believe that the new regulations will impact the viability of businesses like Kaushambi Cables. “This is not based on reasoned analysis.” said a TRAI spokesperson, pointing out that the new framework brings in a structure of assured revenue for multi-system operator (MSO) and local cable operator (LCO) under the network capacity fee. The LCOs have the flexibility to negotiate their revenue share with the MSOs as per the structure provided under Model Interconnection Agreement, he said.

TRAI chairman R.S. Sharma likened the whole exercise of selection of channels to choosing from a buffet meal or a thali, and the carrier charges to the kind of cut that a Zomato or a Swiggy may get from the restaurant or the consumer for a meal. And, TRAI believes that the new regulation will “bring in an era of transparent tariffs and usher in better programming at most competitive prices”.

But that will not cheer up householders like Renuka, who now have no choice but to cough up more money or watch free-to-air Doordarshan channels.