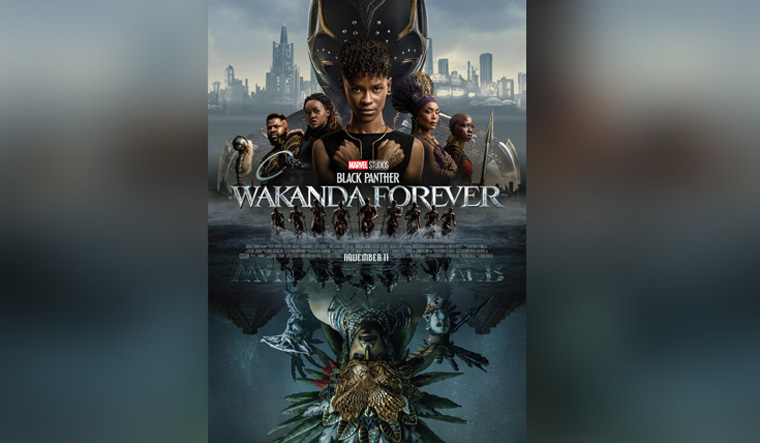 The Marvel opening theme in Wakanda Forever is silent. The images of late Chadwick Boseman, flashing through the crevices of the famed Marvel logo, are an apt tribute to the graceful actor who brought the Black Panther to life in four movies. The passing of Boseman not only left the fans mourning, but also a gaping hole in the storyline as Marvel decided to portray the death of King T’Challa, the Black Panther at the starting of Wakanda Forever.

With the Black Panther gone, what is next to one of the biggest hits in the Marvel Cinematic Universe (MCU)? Director Ryan Coogler has become successful to an extent in finding a band of women to pick up the mantle and lead Wakanda through its new challenges.

Wakanda is vulnerable in a world without Black Panther. Queen Ramonda (Angela Bassett) who has assumed the throne makes it clear: “They have lost their protector.” Even as the Queen takes on the rest of the world nations, who are eager to get hold of Vibranium, the strongest metal in the world, she encounters an even stronger contender, K’uk’ulkan.

The tech-savy sister of T’challa, Shuri, is shattered by the abrupt passing of her brother. She takes an ample amount of time through the movie to find herself.

Namor, the Sub-Mariner, arguably the Marvel equivalent of DC’s Aquaman, has finally been roped in by the writers Ryan and Joe Robert Cole to the MCU.

He is the champion of his people. At the same time, he has been given somewhat of a supervillain image as well. His people revere him as the ‘Feathered Serpent God’. He is the ruler of Talokan, the aquatic city isolated from the ‘surface-land’ deep down in the ocean.

The movie shows the ancestors of the Talokans escaping the colonisers who speak Spanish and brought the small pox with them. They found refuge in waters and soon settle there, far from the grasp of the ‘Surface People' who they hate. The Talokan’s have mastered the life underwater. Their city, tactics for war and life are an experience that we have never seen in the MCU before.

The hunt for Vibranium is a key element in Wakanda Forever. A college project which was started out as a hobby by an MIT student Riri Williams (Dominique Thorne), triggers a series of catastrophic events for the Wakandans. Riri Willaims, known as Ironheart (a storyline that could ease the loss of Ironman), develops the machine, for her college assignment. The machine leads the military to Namor’s kingdom, and the real challenges for the Wakandans begin!

If the truth about Wakanda was a startling revelation for the world powers who thought of it as a ‘country of farmers’, the movie has an even bigger surprise about Vibranium, the source of Wakandan might. Long before they could get a grasp around this newfound knowledge, the Talokan king tries to take advantage of the Wakandan vulnerability and wants them to find Riri Williams.

Okoye (Danai Guriria) and Shuri try to save the 19-year-old Riri and fight the Talokans. Shuri is captured, and through her eyes we get to see the Talokan world. If you were awestruck by the visuals from the Avatar: The Way of Water trailer, be ready for a similar visual spectacle.

Shuri finds herself facing a dilemma, when Namor places an impossible choice before her by asking Wakanda's support.

Nakia (Lupita Nyong’o), who has been away from Wakanda for few years, joins the fight and saves Shuri from Namor. Although she is able to track Shuri and rescue her, this triggers a war.

The capital city of Wakanda gets attacked by Namor. M’Baku (Winston Duke) offers counsel and protection to Shuri, who mourns the death of her dear ones. The Jabari leader lightens the mood with his wits and humour.

With Ironheart and Shuri, the long list of female superheroes who would be leading the fight in the latest MCU phase is growing. Ironheart, who is set to soon get a show of her own, will join the likes of Captain Marvel, the Scarlett Witch, Ms Marvel, America Chavez, and She-Hulk. Ironheart is portrayed not just as an ordinary MIT geek. Her name is apt as we get to see Ironman (obviously amateurish) like suit up action and fights. Ironheart’s love for machines and technology makes her an ideal partner for Shuri.

With Killmonger burning the heart-shaped herb garden after his enthronement in the first Black Panther movie, Wakanda is devoid of her protector for most of the movie. However, the writers have found an effective storyline to work around this and as we see in the trailers, a Black Panther does emerge as Wakanda’s protector.

Fewer fight scenes as compared to some other Marvel hits might leave the fans disappointed but the graphics in Wakanda Forever, both surface and under-water, is definitely up to the standards of Endgame.

Shuri, Okoye, Nakia along with the Dora Milaje warriors leading the fights, brings an all women team to the forefront. In fact, apart from a few, most leading characters are women.

The space that Boseman left due to his untimely demise, however, is still vacant. Throughout the movie, one would miss the ‘real’ Black Panther. The producers of the franchise too seem to have understood this as the mid-credit scenes in the movie give some crucial hints about the future of Black Panther.