'Phone Bhoot' review: A horror comedy that is neither funny nor scary 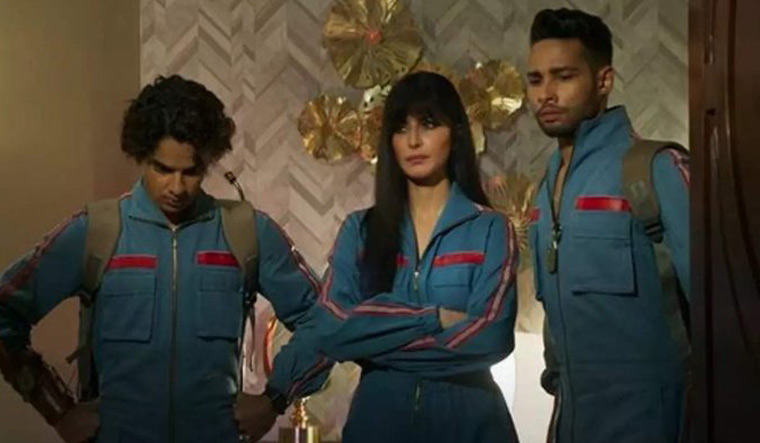 Phone Bhoot is a terrifyingly desperate attempt at comedy that fails miserably because instead of tickling the audience's funny bones, the makers seem to want them to snooze for three hours straight. This is that kind of film which forces one to wonder if the makers had taken a look at their final product at least once before releasing it.

In the cinema hall at a prime-time show, everyone in the audience remained silent throughout the film. Not a single line got as much as a chuckle. This is what happens when one tries to be funny without context. This excruciatingly unfunny, balderdash of a film is the story of two horror fans-turned-ghostbusters (Siddhant Chaturvedi as Major and Ishaan Khatter as Golu). Their room is filled with all things occult—crazy lights, skeleton posters, bhooth masks, and scary red-eyed figures on coffee mugs—and they are desperate to monetize their love for 'bhooth pakdaai,' because, well, they can see ghosts and even speak to them! These ghostbusters devise a business plan: Make money by helping people ward off evil spirits from their lives and help the spirits attain salvation by fulfilling their dying wishes.

In comes Ragini (Katrina Kaif), the 'ghost-on-a-mission' in bangs and leather boots, who dishes out cheesy lines and cheesier performance that only pulls the already flat film to even lower levels. The dialogues are so bland that it feels as if a school student must have penned them down.

There’s Jackie Shroff as Atmaram, a monster who lures dead humans into crime on the pretext of helping them attain ‘moksha.’ Adding some drama is Sheeba Chadha as a wild-eyed, ‘ulte-pair-wali chudail’, who speaks Bengali accented Hindi and adds a punch with her performance in each frame. Phone Bhooth, has a Punjabi Major and Tamilian Golu, alongside a Bengali-speaking Chudail and a Tapori Shroff, and a line-up of bhoots who appear more silly and funny than scary.

This film, along with a number of others released in recent times, must drive the entire Hindi film industry into introspection and may be even get them to go on a break, to make way for more creatively talented writers and filmmakers.