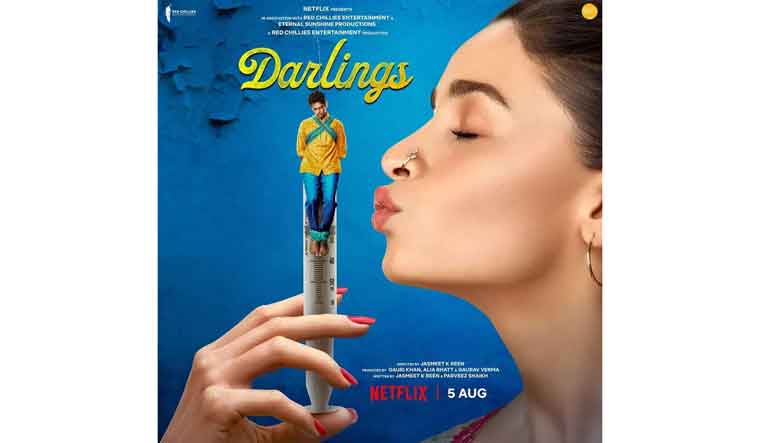 If there were votes to be cast for a Hindi film which sends a strong message against domestic violence and substance abuse, Darlings would win hands down. A clear-cut plotline complimented with a crisp screenplay and compelling performances, Darlings is a fine example of how a film should keep the viewer engaged right till the end.

At the heart of this Jasmeet Reen directorial, which dropped on Netflix on Friday, are four principal actors all of who make sure the story takes the centrestage and is not relegated to the background by their larger than life personalities.

This is a story of a young Badrunissa Sheikh (Alia Bhatt) who marries her boyfriend Hamza (Vijay Varma) with dreams of a happily-ever-after, after he bags a job as a ticket collector with the railways. With marriage comes a shocking revelation of Hamza's psychopathic behaviour, daily episodes of disturbing physical violence and a growing addiction to alcohol. A demure but headstrong Badru puts up with her husband's toxic behaviour despite her mother Khala's (Shefali Shah) warnings, in the hope that he will change. And in order to bring that change she tries cajoling, convincing to mixing anti-addiction pills in a delicious lamb curry but everything falls flat. And the violence just keeps increasing by the day.

Vijay Varma as Hamza is so hateable that you just want to avenge him for all the miseries he brings upon Badru. So beautifully Varma gets into the skin of Hamza's character that it becomes difficult to imagine anyone else essaying the role of the dark and patronising husband who pushes his pregnant wife down a flight of stairs in a fit of rage and shows no remorse whatsoever. That is also the time when the tables turn: Badru will take no more; she's had enough and it is now time to seek revenge.

Her partner in crime is her mother who endured the exact same physical and mental abuse from her husband which her daughter was going through now. Khala had revolted and killed her tormentor and she sermons her daughter, too, to not put up with violence under any cost. Together the duo administer Hamza with high dosages of sleeping pills, tie him up, shut him in closed doors for days on end and torture him with cricket bats and rods. Until here, you totally want to root for Badru as she goes about tormenting her tormentor. The screenplay is so real, so grounded and so interactive that you feel as if you are cheerleading the duo, Badru and Khala.

The only time when it does get a bit unconvincing is when the filmmaker wants you to believe that an adult, of the age and type of Hamza is incapable of untying his hands and legs, and that too, for days on end, after the mother-daughter duo tie him up as a way of putting him in place. This bit could have been made more real as that would also have added credibility to the entire operation of containing and controlling the man who did not blink an eyelid before unleashing his wrath upon his wife for the smallest and the silliest of reasons.

Except for a few instances here and there, Darlings feels as real as can get. You cannot but feel a part of the narrative yourself, when you root for the victim and feel agonised by her misery. All three key characters, Varma, Shah and Bhatt have taken the storytelling to another level altogether with their very nuanced performances. The length of the film is just right and the music adds to the drama unfolding on the screen. The best part is that the script keeps unnecessary melodrama out of its way and tells the story for what it is. There are layers upon layers of sub-plots within the main narrative, which provide commentary on the thriving and complex human relationships. When Khala initiates to kiss her lover, Badru does not question her mother. Instead, she plays along. That is the beauty of the narrative which stays away from being judgmental and questioning its characters' discerning choices to seek and find love.