Packs in too many sensitive topics and raises crucial questions 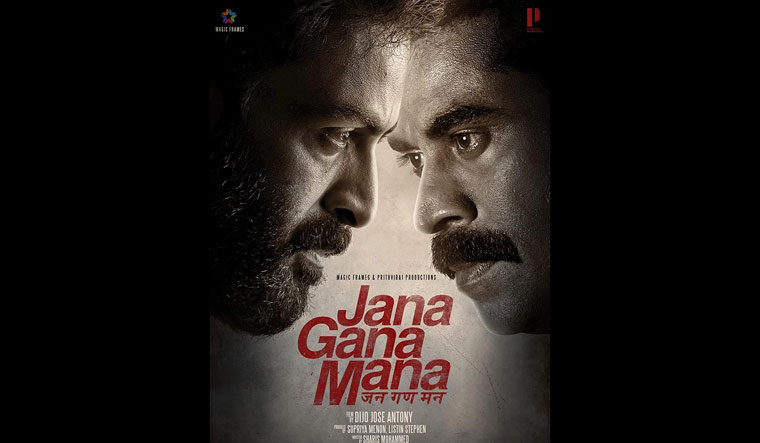 When a film borrows its title from the country's national anthem, it gives away some clues. One would expect it to revolve around a socio-political issue, evoke the national spirit, or highlight something that touches the audience's conscience. Filmmaker Dijo Jose Antony's latest outing Jana Gana Mana does exactly this, and more.

The political drama makes you rethink about some of the major national headlines (if you track the news) and viral social media campaigns that shook the country over the past few years. On the whole, Jana Gana Mana may feel like one of those year-end rewind of events that made headlines, because we tend to forget the biggest stories when the next 'breaking news' strikes. From campus protests, rape, dalit rights, caste discrimination in India's universities, student suicides and fake encounters, Jana Gana Mana packs in too many sensitive topics and raises piercing questions. Even with so many themes squeezed into one, the film does not feel unnecessarily heavy—that is where the well-written script stands out.

Set in Karnataka in 2019, the film revolves around the rape and death of a college professor Saba Mariam (Mamta Mohandas). Police discover her charred body and it triggers public outcry and a series of protests as students demand justice for their teacher. As police crack down on the protesting students, the rebellion spills over to other campuses (including Maharaja's college in Kerala). The scenes are reminiscent of the nation-wide students' protests in 2020.

ACP Sajjan Kumar (Suraj Venjaramoodu), who is entrusted with the probe, vows to nab the culprits and deliver justice in 30 days. Sajjan dominates the first half of the film, with numerous clap-worthy dialogues and performances. Jana Gana Mana is in fact, a Suraj show all through. With his body language and dialogue delivery, Suraj aces the role of a police officer handling a high-profile crime that has garnered national attention.

Veteran actress Shari makes a comeback to Malayalam cinema as Saba's bold mother Shabana. Her restrained performance is notable in a role that could have gone overboard with melodrama.

Prithiviraj Sukumaran's fans get to cheer for their favourite actor only in the second half in which he takes up most of the screen-time. If the film seemed like a crime investigation thriller in the first half, in the second half, it swiftly shapes into a courtroom drama that steers the plot in a different direction. Prithviraj as Aravind Swaminathan delivers a good performance in the scenes that are driven solely by dialogue delivery and not mass action or dance sequences. Prithviraj, who was last seen in the comedy family drama Bro Daddy, which he also directed, fits comfortably into the role of a middle-aged lawyer who uses a crutch. Shammi Thilakan, as advocate Raghuram Iyer who appears for the State, is a wonderful revelation and casting choice.

Actress Vincy Aloshious delivers a note-worthy performance as Gouri Lakshmi, a students' leader with fire in her belly. Vincy, who has impressed audiences with her realistic performances recently in Bheemante Vazhi and Kanakam Kamini Kalaham, proves she is here to stay for a long time.

Director Dijo, who debuted with Queen, which also revolved around rape and death of a woman, seems to be drawn to subjects of social injustice. The film also borrows heavily from yet another major news event—the 2019 Hyderabad gang rape case and the ‘extrajudicial execution’ that followed the incident. In the second half, Dijo and team raise pertinent questions about the definition of 'justice' in the country. What does it mean when a person from a certain community or socio-economic background is denied what is rightfully theirs? Why is it that the fight for justice is more traumatic for some section of people in the country? Where does media stand in the tussle between politics and crime? How does media narrative affect public perception and change the course of a case? Writer Sharis Mohammed treads carefully as he paints the current political landscape of the country—be it in the references to a minority community or the depiction of the colours of a political party's flag.

With too many issues packed into a single plot, it feels like the film lacks a powerful antagonist. Guess one could say it is the system that is the villain here—the lust for power or 'adhikaram' as we hear many a time in the film.

The dialogues in Jana Gana Mana keep shifting between Malayalam, Kannada and Tamil—this might get a bit difficult for a viewer who only understands Malayalam. However, all of these are given Malayalam subtitles and that deserves special mention. For those expecting a face-off between Prithviraj and Suraj after their wonderful performances in Driving License, this might come as a disappointment. The film's runtime could have been cut short a bit. As for Prithviraj's character, his back-story was given a rushed treatment—a part that would probably get attention in the sequel that was recently announced.