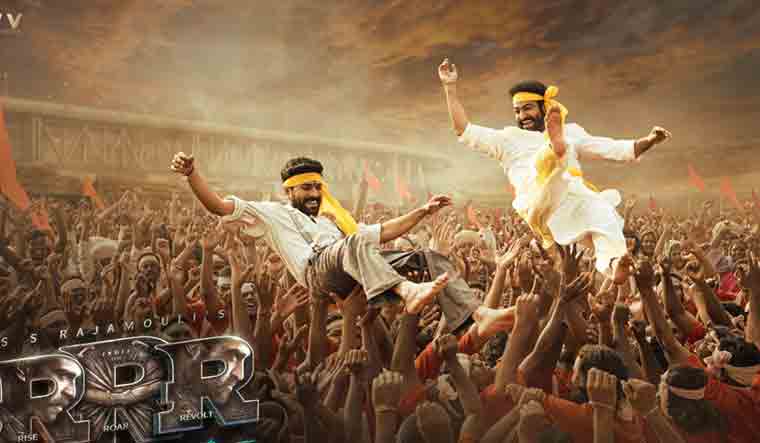 Showman SS Rajamouli chose two Telugu tribal icons to market his movie RRR right from the word go. Alluri Sitarama Raju from north coastal Andhra and Komaram Bheem from the rocky terrains of Telangana are considered legendary freedom fighters of the early 20th century. In the three-hour movie, the resemblance stops at the names and the costumes of the lead actors played by Ram Charan and Jr NTR as the story has no connection with the lives of the historical figures or the real events of that time.

RRR has a simple plot revolving around a tribal girl which has been presented on a grand scale, a la director Rajamouli style. The movie which went on the floors in 2018 had disturbed shooting schedules due to the pandemic and finally saw the light of the day with a much-hyped worldwide release on Friday.

The movie is set in 1920, in the time of British Raj era. Malli, a child in a Gond tribal hamlet in Telangana catches the fancy of a British lady with her tattooing skills and pleasing personality. At the behest of her husband, Scott, a high-ranking British officer, Malli is abducted by the accompanying troops and taken away to Delhi despite protests by her family. The rest of the story shifts to Delhi and its outskirts where both the protagonists are introduced through powerful scenes.

A. Sitarama Raju (Ram Charan) is a dutiful and a courageous police officer of the British empire who aspires to rise up the ranks. Bheem (Jr NTR) as the leader of tribal hamlet is out to get back the abducted Malli. Both meet unexpectedly in Delhi and forge a special friendship while keeping their respective mission under-wraps. The first half of the movie registers more than the second half. A few visually stunning action sequences and exceptionally synchronised dance moves from “Naatu” song stand out. Ram Charan’s role is high on daredevilry and seriousness, Jr NTR’s screen personality is humble and emotional.

The second half of the movie adds more star power in the form of Alia Bhatt and Ajay Devgan. However, it loses steam as the movie progresses narrating the past of Sita Rama Raju and his real intensions behind joining the British rule. Almost all the departments including performances, screenplay and narration seem to taper off by the time the movie ends.

A tried and tested formula in every Rajamouli movie is to elevate the character of the antagonist and show him as a formidable challenger to a hero. In this movie, that aspect is completely missing as Scott is cast in a forgettable role and has less screen time. Alia is seen in an extended cameo.

The performances don’t come across as out-of-the-world and screenplay at times, is dragging and unconvincing. Rajamouli not just had two tribal icons in his movie but also two actors from iconic backgrounds of the Telugu movie industry with a huge fanbase. Ram charan is the son of actor Chiranjeevi and Jr NTR is the grandson of former CM and late actor NT Rama Rao. It looked like the balancing act to do justice to both the actors shifted focus from rest of the cast and storyline. Music by MM Keeravani is a saviour.

All in all, the movie makes for a decent one-time watch, given the effort that went into it.