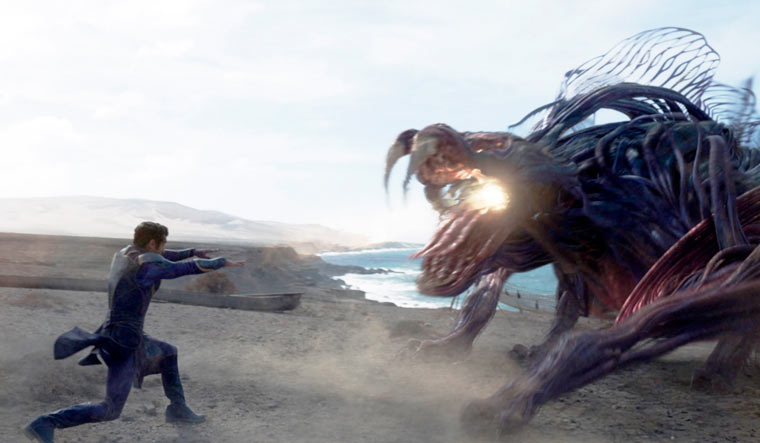 Kumail Nanjiani in a scene from "Eternals" | Marvel Studios via AP

In Eternals, China-born filmmaker Chloé Zhao brings a refreshing gaze to the Marvel Cinematic Universe: A humane one. In an industry dominated by the male gaze, this proves sufficient to make Eternals feel different from the usual Marvel fare.

With no context, it can be easy to enter the theatre expecting yet another cynically-engineered superhero flick, churned out by the CGI film factory that is the Marvel Cinematic Universe, of which this film is part of “phase four”.

Phase four is many things—a bid to keep audiences engaged post-Endgame; a device to introduce new actors into a roster that had already crossed a decade on screen; a way to tell comic book stories that have not yet been told. With the average revenue per Marvel movie at just under a billion dollars, a cynical view of phase four would see it as a means to make $4 billion with four movies in 2021.

But Zhao, as the first Asian woman to win a Golden Globe, the first to win an Oscar, and now, the first to direct a Marvel movie, has proved that an MCU movie can be bigger than the sum of its superheroes, one that can tackle questions like the purpose of human existence, whether life on earth carries more value than life elsewhere—and the pros and cons of super-beings protecting humans against themselves.

Besides this, she imbues the latest addition to the MCU with a moving undercurrent of human tenderness and emotional intelligence.

The film introduces the “Eternals”—non-ageing beings who have nurtured mankind for over 7,000 years. Sent to Earth by a deity-like being called Arishem, the Eternals are tasked with protecting humans by eradicating a monstrous group of beings called “Deviants”. They do this, several thousands of years before the present. With this mission seemingly accomplished, they expect to return to their home planet, only to be ghosted by Arishem. With nought else to do, they remain Earthbound and pass millennia watching mankind advance from the Mesopotamian era to the modern age, abiding for the most part by the instruction not to interfere in its affairs—which spared them the responsibility of getting involved when Thanos was doing his thing.

For an undying and involuntarily neutral being, human history is a painful tapestry to experience. Zhao skilfully turns the camera onto Eternals star-studded ensemble cast, as they witness everything from the dawn of agriculture to the genocide of the Native Americans and the atomic bombing of Hiroshima. Despite witnessing the worst deeds man has to offer (most human history is a dark tale in hindsight), they maintain their love for humanity.

A “love for humanity” is increasingly a scarce thing on cinema screens. Rather, the inverse seems more popular. We see it in the rise and perennial popularity of anti-hero protagonists, from Joker to The Umbrella Academy, as well as in the motivations that drive some villains to tear down societies; from the nihilism of My Hero Academia’s Tomura Shigaraki to the environmentalism of Batman Begins’ Ra’s al-Ghul. It is telling that the Malthusian mission of Thanos to eradicate half the universe’s population found many takers.

The Eternals love and hate each other. Sometimes, they fight the ones they love; sometimes they love the ones they fight. Zhao’s camera dwells intently on these moments; less attention is given to blockbuster battle scenes, though these are peppered liberally through the film.

The ensemble cast of actors are a refreshing bunch to witness, and in their depicted struggles, they help answer the above questions.

One sees familiar faces from Game of Thrones in Richard Madden (playing Ikarus) and Kit Harington (playing Dane Whitman). Harrington’s main character energy shines through, despite only brief moments in the film. Madden shines as a sort of Marvelesque Superman; his power uncontested by almost everybody except Thena. Ma Dong-seok, of Train to Busan fame, proves immensely likeable.

Gemma Chan takes the lead as Sersi and delivers an intensely emotive and convincing performance—the best of any female lead the MCU has given the spotlight to yet.

A slightly sore thumb emerges in the form of Kumail Nanjiani, whose comic relief seems forced, his character not yet wholly extricated from his role as Silicon Valley’s Dinesh. While it is commendable to see a South Asian character in a Marvel line-up, was a Bollywood dance sequence starring him really necessary? But then again, perhaps every film must offer you, the audience, something to groan against.

Zhao, who has evidently fought to make Hollywood a more inclusive place, has put together the most diverse Marvel line-up yet. The ensemble cast of heroes includes South Asian, Latina, deaf and LGBT characters. That the result feels nimble and unforced illustrates how diverse casts can be added without it seeming shoehorned.

Amongst the acting performances, the highlight is Lauren Ridloff’s portrayal of Makkari, a deaf superhero with lightning speed. Within the confines of an exposition-heavy film, the voiceless Makkari proves most convincing, perhaps carrying the most “empathy” among the case, besides Sersi herself. That many of the Eternals learned sign language to communicate with her is a heart-warming and compellingly world-building aspect of the film.

The film suffers from an over-abundance of exposition. It begins with a wall of text setting up the premise, breaking the "show, don't tell" rule in favour of assigned reading material. The actors take visible time to warm up to their roles; the first scene starring them seems almost like watching a group of videogame non-playable characters (NPCs) interact poorly. The revision of human history to suit its plot seems somewhat patronising, though one can hardly fault the film for abiding to its comic book script.

The fight scenes are well choreographed but hardly unique. The addition of 3D could also have been avoided, given that it adds nothing to the abilities of actors, and at best adds little more than some brain confusion to action sequences.

Ultimately, Eternals adds promising new lore to the MCU; it introduces a talented array of actors to headline its sequels (for which one or two have already been set up in the post-credits scene). At some level, it adds new stakes, heroes and villains to an MCU still reeling from the loss of Iron Man and Thanos.

The pandemic has cost most of us the experience of watching a Marvel film in a theatre. If you are fully vaccinated and looking to experience the magic of Marvel’s cinema again, Eternals is up to the mark. And, if you are developing a growing fixation on the filmography of Chloé Zhao, Eternals may end up her most popular film yet.