Kuruthi review: An uninspired take on hatred and the pitfalls of religions 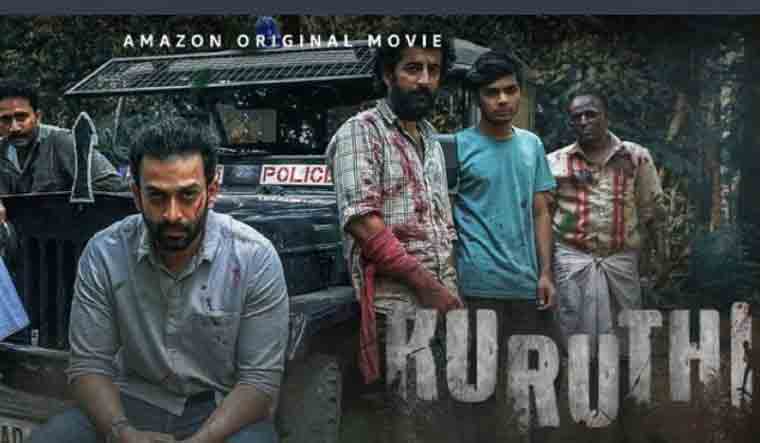 Kuruthi (ritual sacrifice) is the act of seeking to please gods above for favours, or riddance of misfortune. The blood spilt and the life sacrificed are believed to gladden the deities into granting favours. In Manu Warrier's directorial debut Kuruthi, the sacrifice involves more than one life, and the intent is not to gratify an invisible deity, but to quench hatred that forces men to see each other only through the prism of religion.

Featuring an ensemble cast of talented actors, Prithviraj Sukumaran, Roshan Mathew, Murali Gopy, Shine Tom Chacko, Mamukkoya, Srindaa, Navas Vallikkunnu and Thanneer Mathan Dinangal  fame Naslen, Kuruthi narrates the tale of a group of men who end up at a house in a night of horrors.

Ibrahim (Roshan Mathew) is a man burdened by a loss that is too hard to bear. His teen brother Resul (Naslen) is hate-filled teenager, unable to make sense of the world that he feels as unfair to his community, and has strong views against people who he believes are opposed to his idea of the almighty. Their father Hassan, played by Mamukkoya is hard on him, and that isn't making life any easy for Resul.

One night, a cop arrives at their house—cut off from the rest of the village after a landslide—with a prisoner. Hot on their trail are a few men bent on vengeance, one of who is Resul's mentor and Ibrahim's friend Karim (Shine Tom Chacko). Leading the men is Laiq (Prithviraj), who has assumed the role of his god's hired gun and is looking for revenge for a wrongdoing at the hands of the prisoner.

A group of men, and a woman, at a house at each other's throat and blinded by the god(s) they claim to fight for and protect does appear like a promising premise, one that could offer plenty of chill and tense moments. Kuruthi, with the corny tagline 'A Vow to Kill... An Oath to Protect' had the potential to be a thrilling ride while also attempting to be a commentary on the cycle of hatred and injustice perpetuated by those who place heavenly beings above their fellow humans. However, the film, written by Anish Pallya, fails to build on the premise and ends up being a half-baked attempt.

Roshan Mathew delivers a decent performance as the conflicted man Ibrahim and Murali Gopy does justice to his character of a slightly prejudiced, but no-nonsense cope. The only woman character in this entire affair of hate-filled men, Srindaa's Sumathi, is convincing as the voice of sanity most of the times, while Prithviraj's Laiq ends up as the one-note character of a bigot, who refuses to see people beyond their religions. Mamukkoya's Hassan had enough back story to be a menacing presence, but is let down by a confused script and contrived scenarios. Naslen shines as a confused victim of religious indoctrination, while the rest of the cast does not have much to contribute.

Much of the proceedings unfold like an amateur drama, with dialogues that sometimes appear to be lifted from the comments section of a not particularly enlightening post, especially when the director makes his characters mouth their reasons for being obdurate in their spite for each other. The uninspired dialogues fail to give any gravitas to the proceedings. Abinandhan Ramanujam's cinematography brings in the claustrophobia necessary to the conflict unfolding mostly inside a decrepit house, but the action sequences appear poorly choreographed.

Touted to be a fast-paced thriller with plenty of action and edge-of-the-seat moments, Kuruthi ends up as half-baked attempt with a confused message about religions and people who kill and maim in the name of the god(s).