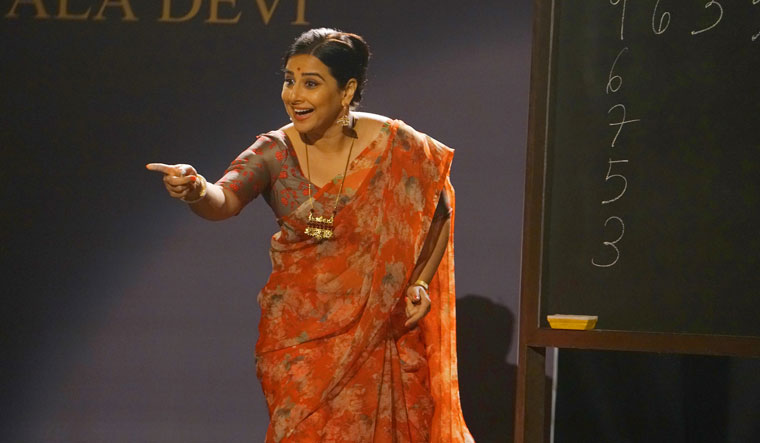 Remember linear equations in school? The one-variable type where, once you find out the value of the ever-elusive 'x', you have to verify the left hand side (L.H.S.) and the right hand side (R.H.S.) of the equation are equal, using that value? Ah... the joy of writing 'Since, L.H.S. = R.H.S., hence verified' at the end!

Forgive the maths class, but simple as it may appear, even if you get the value of 'x' correctly, you might end up getting L.H.S. unequal to R.H.S. Why? Probably because you did not follow the 'BODMAS' rule properly. Moral of the story? A job half-done is a job undone.

Alas... that's the story of Anu Menon's Shakuntala Devi, which is based on the life of the famous 'human computer'. The equation has been out there for the world to see—a maths prodigy from Karnataka who conquered the world with her magical ability with numbers, a strong-willed, independent, confident and witty woman who lived life on her own terms. Interestingly, for such a celebrated and public personality, little is known about her personal life. But the director, Anu Menon, managed to find out the 'x'—to look at the genius's life through the eyes of her daughter Anupama, who had a strained relationship with her famous mother, and not just as a cradle-to-grave story.

There are other positives, too, like the cast, for instance. It's difficult to imagine anybody else in the role of the brainy and vivacious Shakuntala but Vidya Balan, who, despite the on-and-off south Indian accent, and over-the-top portrayal at times, manages to carry the film pretty well. The original maths wizard enjoyed playing with the numbers and with her audience, and Balan embodies her spirit ably. Sanya Malhotra as the daughter Anupama, too, is brilliant in patches. The sheer range of characters she has portrayed in the past few years (Dangal, Photograph, Pataakha, to name a few) is testimony to her talent and potential. The two male protagonists, Shakuntala's husband Paritosh Banerji (Jisshu Sengupta), and Anupama's husband Ajay Abhay Kumar (Amit Sadh), though remain mostly in the background, make their presence felt when given a chance.

Now the director's challenge was to use the 'x' and link the rest of the equation. The screenplay, by Menon and Nayanika Mahtani, is the first deterrent. Following a non-linear narrative to link Shakuntala's childhood and her present as a mother, the storytelling jumps from one era to another as quickly as Shakuntala Devi solves her maths problems, often leaving the audience confused. It seems the director was in a perpetual hurry to reach the 'conflict' in the plot—that between the mother and daughter. But, in the process, the finer points are missed. An attempt is made to establish why Shakuntala Devi became what she became—a flawed genius, and kudos to the makers for portraying her so—and how life comes to a full circle for both her and her daughter. How Shakuntala ends up becoming what she despised. How she robs her child of a childhood the same way her parents robbed hers. Mother-daughter relationship has only been explored fleetingly in Hindi cinema (The beautiful Nil Battey Sannata is one that comes to mind). And that's why the plot held much promise. But the film hovers over the details, never quite descending into the depths.

The film touches upon the milestones in her life alright. But she was much more than just a maths wizard. She was an author, who wrote books on maths puzzles, murder mystery and even on homosexuality (one of the most disappointing and confusing moments in the film), and an astrologer. She even dabbled in politics, contesting against Indira Gandhi. How did all this happen? It's almost a sin to gloss over such details and hoping the conflict between the mother-daughter alone will hold the film together.

That the inputs were given by her real-life daughter herself, lends credibility to the whatever we see on the screen. Well, most of it. There are moments in the film which makes the audience wonder how much of it is real and how much of it is 'creative liberty'—be it the dialogues (by Ishika Moitra) mouthed by a five-year-old Shakuntala, or the exchanges between Javier (Luca Calvani) and Shakuntala, or between her and husband Banerji.

“We Indians are like that only. Drama or nothing,” Shakuntala tells Javier in a scene. Yes, Shakuntala Devi was never meant to be The Man Who Knew Infinity—a subtle and beautiful biopic on yet another Indian maths genius, Srinivasa Ramanujan—simply because Shakuntala was no Ramanujan. But, isn't it ironic, for a film on a woman genius who broke stereotypes, the Indian audience is stereotyped as one which loves nothing else but drama?

P.S.: When the end credits roll, there's song and dance routine in a class, where the maths sir is teaching the students the 'BODMAS' rule!