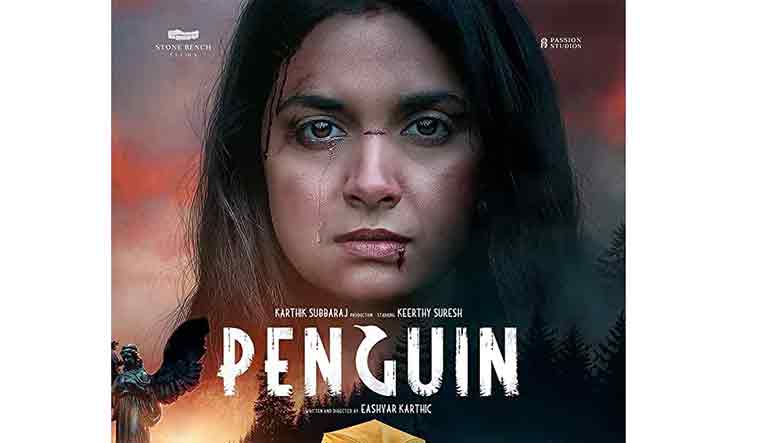 As the film opens, a dog finds a torn shoe of a kid. Wearing a yellow jacket, a boy walks towards a statue deep in the woods even as the dog cautions him with his barks. A man donning a Charlie Chaplin mask and a yellow umbrella in his hand emerges from behind the statue. He slashes the boy with a long knife. He then picks up the body and walks away towards the lake only to disappear into the water. The chills at the beginning of Penguin last till the end, powered by Eashwar Karthic’s crisp screenplay. Penguin, which is now streaming on Amazon Prime Video, is set in Kodaikanal, adding an eerie tone to each scene.

In the next scene, a pregnant mother, Rhythm(Keerthy Suresh) wakes up to a bad dream, as she tells her dog, “Cyrus, I am OK.” With a grief-stricken face, Rhythm is a disturbed woman, who carries the guilt of letting down her son, Ajay played by Master Advaith, six years before. Losing Ajay had brought in changes in her life—separating from her first husband Raghu, played by Linga and marrying Goutham (Madhampatty Rangaraj). Rhythm, despite several warnings from her doctor, goes in search of her son, whom she lost six years ago. She drives all the way up to the lake where she lost her son. Does she find the child? Who was the kidnapper and what was his motive? These are questions Penguin takes you through as Keerthy heads out on the quest for her lost child. Eashwar Karthic comes out with several twists and turns to give answers to “who” and “why?”

Keerthy has once again proved her acting mettle in Penguin after her fantastic performance in Mahanati. As Rhythm, Keerthy is flawless—portraying a range of emotions as well as carrying off the body language of a pregnant woman. “I am pregnant and not brain damaged,” she says when she interrogates a criminal only to make a point that being pregnant does not make a woman incapable of handling difficult situations.

However, the supporting cast is very weak, and does not match up to Keerthy’s powerful performance. In fact, both her husbands do not perform much, thus letting down the audience. Master Advaith, with his silence, adds more to the thrill. His blank stare in itself speaks volumes. Some scenes like Rhythm interrogating a criminal, inside a police station in the presence of police officers, is quite exaggerating.

Keerthy’s performance, combined with Karthik Palani’s cinematography and Santhosh Narayanan’s background score set the stage for a gripping thriller. The first half keeps you on the edge, while the second half shakes you up with unexpected thrills.