‘Ema’ movie review: A melange of fire, dance and psychedelia

‘Ema’ is a psychedelic colour scheme, elevated by the movie’s music 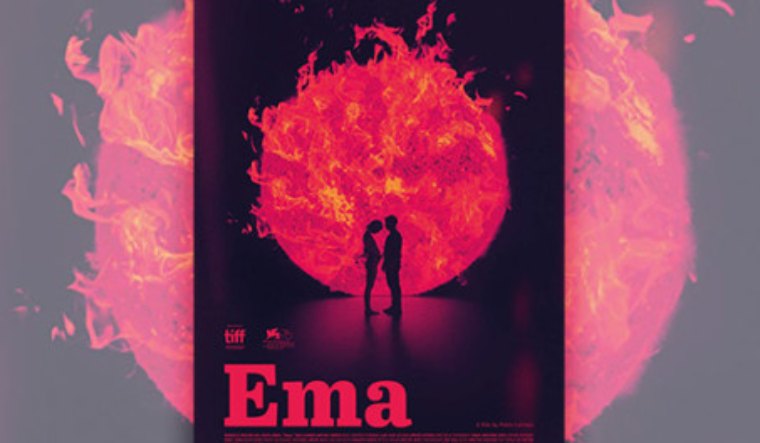 There is something about Pablo Larraine’s narrative, which is deeply complex and convoluted. Except for his last Jackie (2016) that came after his Oscar nomination for No (2012) and he didn’t write, there is an eccentric nature in all of Larraine’s films. Ema, his recent release, is no different. If anything, it’s a psychedelic colour scheme, elevated by the music of Nicolas Jaar and reggaeton dance moves.

Set in modern-day Chile and starring newcomer Mariana Di Girolamo and Gael Garcia Bernal, Ema begins with a scene set on a dark roadway, a traffic signal burning. In the following scenes, we find out that we are dealing with two characters that have a fascination to burn things. The camera zooms out; a figure geared with a flamethrower is taking a good look at the signal that has been set on fire, before quietly walking out. There seems to a certain sense of satisfaction.

As the plot shifts between the past and present, we are introduced to Ema (Girolamo), her husband, Gaston (Bernal) and their life together. They have a love story—the man, a choreographer has helped the woman realise her love for dance and she has excelled. Now, they work in the same company—he leads a group of dancers of which Ema is a part. But there is trouble in paradise. Their adopted son, Polo, who is a brat like his mother, has accidentally been involved in causing a fire. It has burned one side of Ema’s sister’s face. What do you do with a naughty child? If you think morally, it’s your responsibility to teach him to conduct himself better. But the couple here has sent eight-year-old Polo back to the orphanage, leading to fights and blame-game.

In one of the initial scenes, Ema is talking to a person from the child protective service and enquiring about what would happen with her son. The woman refuses to give her an explanation before telling her off, “What you want isn’t a child. You want a child who does nothing.” Later in the film, there is more introspection on the entire issue of child adoption and raising kids. A couple of scenes really stand out. There’s one with Ema having a conversation with her own mother during a bus ride where the latter talks about instilling the idea of staying together, always. In another, involving a protective services officer, riveting questions are raised around adoption and what follows. Can an adopted child be returned like a commodity because of bad behaviour? What do children want? To be loved, perhaps. To be told again and again that they will be loved even if they go wrong at some point.

But a drastic step has already been taken, and not without leaving Ema with maternal instincts that keep growing with the absence of the son who loved her immensely. In addition, the eccentricity and volatility of both Ema and Gaston lead to a breaking point in their marriage. They work together but not without conflicts as Gaston seems to stand by the decision they have made, while Ema wants to recoup.

Girolamo is arresting. With dyed hair pushed to the back, her lithe body lost in dance, and her striking way to look into the camera keeps the focus completely on her. Bernal, on the other hand, is completely submissive, never letting him shine, always playing himself down. It says a lot about their relationship equation. He is older; probably, has been more aggressive, too. But she has taken charge. She leads and he follows.

Larrain, who has already got a thumbs up for the film at almost every international film festival, strikes a stunning balance between dance and drama. The film can’t solely be put into any one category. When there is neither dance nor drama, there’s lots of sex. And yet, nothing seems to fall apart, even for a minute. If you don’t get distracted by the continuous to and fro between the past and present, the three elements come together in the most surprising and suspenseful way in the end.

Streaming on: Mubi till May 30