The film brings the issue of homosexuality to the forefront 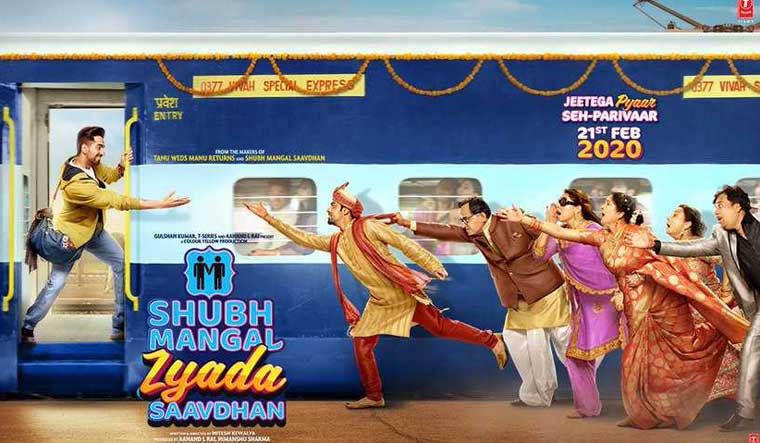 'My sexuality is my sexuality. Nobody else's sexuality.' This line best sums up the central theme of Shubh Mangal Zyada Saavdhan. Homosexuality is normal, embrace it; love is gender neutral, accept it; same sex marriages will soon be commonplace, wait for it.

Shubh Mangal Zyada Saavdhan is a refreshingly warm, fun and a highly dramatic story of Aman (Jitendra Kumar) and Kartik (Ayushmann Khurrana) who must together as a couple, battle it out with Aman's conservative Tripathi family and in particular with the parochial, 'traditional' mindset of his father (Gajraj Rao) who, despite being a scientist, and an ambitious one at that, fails to fathom the role of science and genetics behind same-sex behaviour, and that hypothalamus does not wait for one's instructions before releasing 'love' hormones.

For Shankar Tripathi, his son has fallen prey to a 'deadly disease' and he tries everything he can to rid him of the spell, even as a frustrated Aman chides him with, 'Aapka Oxytocin pyaar, mera Oxytocin disease!' The film moves in a fast pace and keeps the viewer totally engaged with a lively screenplay, meaty dialogues and lyrics one would be left humming long after the film is over. While the first half has a multitude of characters with everyone bringing something interesting to the table, the second part seems a bit preachy and tedious, especially the last fifteen minutes when Kartik goes overboard and dresses up as Aman's runaway bride that leads to the never ending speech that ensues.

Aptly, the setting is Allahabad and director Hitesh Kewalya has done a fine job of bringing out the intricacies of a traditional North Indian, joint family household with the elderly, the middle aged, young and children share the same roof and space to live together as one unit, despite their occasional fallouts with each other. You actually feel that you have been been transported to a real life household in Allahabad.

Both, Khurrana and Kumar have given a stellar and a very believable performances, and Neena Gupta plays the role of the matriarchal head of the family flawlessly. This is a mass entertainer that has been successful in bringing the issue of homosexuality into the mainstream just as its 2017 version, Shubh Mangal Saavdhan was successful in making the subject of erectile dysfunction a dinner table conversations. What remains to be seen is if it can indeed get people to accept same sex marriages, as shown in the film.