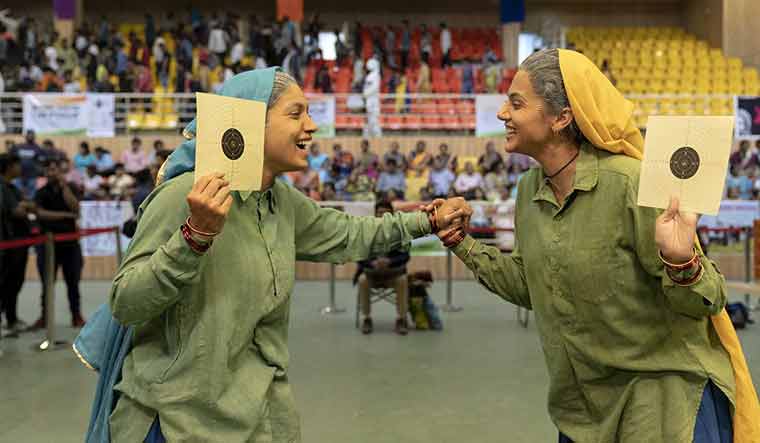 The story of their lives sounds like the stuff folklore is made of. At over 60, two women from the Indian hinterland rediscover themselves at a shooting range. A film was waiting to be made on the lives of Chandro and Prakashi Tomar from Johri village in Uttar Pradesh, who not just excelled at the veterans' sharpshooting competitions across the country and beyond, but also inspired many in and around their village to pick up the sport.

But ever since a film was announced earlier this year, with Bhumi Pednekar (as Chandro) and Taapsee Pannu (as Prakashi) in the lead roles of the sharpshooter sisters-in-law, the film has faced criticism. With the casting of younger actors to play the sexagenarians, the ageism debate took over the messaging. Rightly so, because an industry that continuously makes its superstars in 50s turn teenagers, could not even give older female actors roles that they deserved.

That debate, however, can be put to rest, now that the film is out. Because Pednekar and Pannu, even with make-up that gets distracting at times, bring life to the characters they are portraying. They are feisty and sporting, as one would expect the two old ladies to be in real life. And not to forget, they are supportive, not just to each-other, but to the community of women in the village in general. If there is a secret that a woman is supposed to keep, they guard it with their lives. At one point in the film when the two old ladies, along with their granddaughter and daughter, are planning an outstation trip to compete in one of the many competitions that they eventually become a part of, others listen in. They first say, “ye baat hum chaaro ke beech rahegi [this shall stay between the four of us]” only to realise that there are too many women around who have heard their conversation. They soon correct, “ye baat hum aurato ke beech rahegi [this shall stay between us women]” It remains so, for years. In the age of television shows that are still soaring high with scheming women, that is endearing and charming.

This is where Saand Ki Aankh, the debut directorial of Tushar Hiranandani, a film writer for over a decade and a half, wins its first battle. It shows women who look out for other women, stand by and support in their moments of high and low. There are trickier parts to be tread in the film though, like that of addressing deep-seated patriarchy, and the resulting confinement of women. That is addressed with a tinge of humour in most parts, which not just makes the film more engaging but also gives one a chance to introspect. My favourite moment in the film is when the two dadis, who with the help of Dr Yashpal (a superb Viineet Singh)—a doctor-turned shooting range owner in Johri —are now competing in different cities, discover that their competitor, Maharani Mahedra Kumari from a royal family in Rajasthan, is escorted by her husband to the range. They are shocked that a man can lend his support to his wife to this extent. It is as if the director and screenplay writer (Balwinder Singh Janjua) are taking a dig at their own ilk, where support to women from men is a thing of wonder and shock. They do it numerous times over the course of the film, and come out a winner each time.

The audience sees the film from the point of view of a child, Shefali (Sara Arjun), the granddaughter of Chandro. She takes us back to the 1950s when Prakashi had just got married, to the time when the bond between the two women was yet to grow. Then to those when they toiled in the fields, at brick kilns and at home, and produced babies after babies. The husbands, in the meantime, enjoyed their hookah and chit-chat.

Getting a narrator in a child is a ploy that works well. It ensures that the issues raised do not become too serious in tone, keeping the messaging of the film focussed to the achievements of the two women. That does not mean that the suffering that the women go through isn’t highlighted. It is, but in a milder tenor, more often with sarcasm. And, thanks to the male actors in the film who play along too well to let that come out in the best possible way, never trying to grab limelight or become too important in the story. If Singh wins as the supportive coach, Prakash Jha is superb as the menacing patriarch Rattan Singh Tomar. Add to it the music (Advait Nemlekar) that keeps the rhythm of the film in sync.

The blemishes are in the parts when the film tries to be too appealing for the masses. It uses the tropes of commercial cinema and plays to the gallery, like the dadis dancing at a royal party, or the treachery of Rattan Singh becoming too unbelievable towards the end—making it funnier or tragic than it would have been may be in real life. But for most part, Saand Ki Aankh hits the bulls eye.