The breakdown of civilisation, in high definition 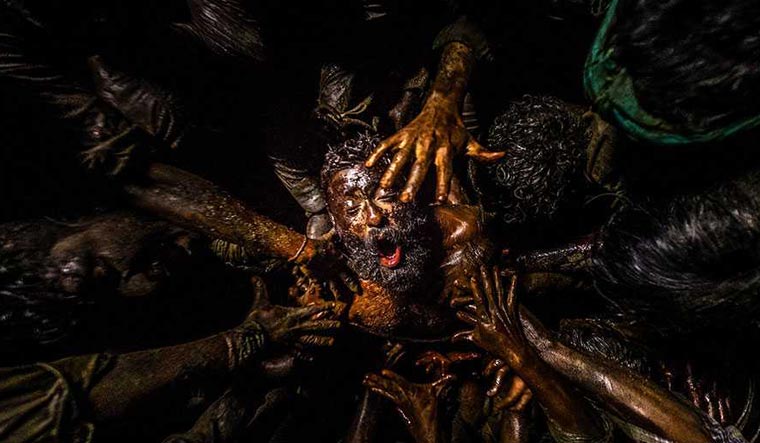 Is man intrinsically evil, a creature that learnt to layer over its worst impulses with imposed societal principles? Or is he born Tabula Rasa (blank slate), with a morality acquired of lived experiences. One of the biggest philosophical queries of the modern era, the two sides of the debate are best represented by Thomas Hobbes, who argued for darkness and violence inherent in men, and Jean-Jacques Rousseau, who claimed otherwise. In his latest Jallikattu, director Lijo Jose Pellissery takes the Hobbesian hypothesis and flips it on his head. Here, the question is not: Is man evil? Instead, he asks: What are the different manifestations of human evil?

In the film, a bull escapes the butcher 'Kaalan Varkey' (a scintillating Chemban Vinod) in a hilly Kerala village and goes on a rampage; every thatched hut, every roadside tea stall, every plantation, every physical obstacle that the beast mows down is a domino that hastens the collapse of civilisation, smudging the boundaries between man and beast. Mobs gather—those hardened, mostly Christian, settlers from the plains—and a hunt for the animal with Varkey's assistant Antony (Antony Varghese) at the forefront. Everybody wants a piece of the kill. Initially, it is a comedy of errors: the town's richest man Kuriachan finds himself the object of humiliation when he makes a last-ditch effort to procure some meat for his daughter's wedding. The communists are in a fix when their flags fall before the bull. On one hand, they are furious; on the other, as a party member reminds the agitated cadres, butcher Varkey has donated to their cause before.

But, as darkness falls, the tone and tenor shifts. Liquor plays its part. The sole gun owner Kuttachan (Sabumon)—the black sheep of the village—makes an entry to a burst of firecrackers and welcoming slogans. The crowd resembles less of a desperate mob trying to secure their homes from a beast on the prowl; a celebratory, almost festive, mood creeps in as the metaphoric noose slowly but surely tightens around the creature. “Do you know which is the tastiest of all meats? Human flesh,” Kuttachan whispers half-jokingly to an onlooker, as he trains his gun into the night. When the film tumbles to an orgasmic climax of blurred limbs, frenzy, anger and lust, no other words ring truer, or louder. The visuals by Girish Gangadharan are truly breathtaking, as is the primal, aboriginal chants by Prashanth Pillai, cresting and troughing along the uneven currents before its inevitable plunge into insanity.

Jallikattu is not about the bull, which is but an allegory to the slightest external stimulus that rips apart the facade of civilisation. It is not about Varkey, on whom the villagers turn when faced with the trail of devastation left by the beast. The film is about Antony, and his attempts to reclaim masculinity in a hierarchical society that has stripped him of his very humanity. Caste and class play their part in determining his social location. “Why would a worm in the bull excreta like yourself need sandalwood,” one of the villagers sneers at him, referencing his occupation.

Thematically, Jallikattu is a cross between [William] Golding—whose tour de force Lord of The Flies dissects the darkness and violence embedded in the human nature—and Kafka—whose god complex often played out fantasies of seraphic sadism on his unsuspecting characters. If Golding marooned schoolboys in a deserted island to yank out the devil sans mask in a world free of societal constraints, Pellissery injects entropy into the system with the manic zeal of a rogue scientist, capturing the upheaval in a quantum of heartbeats and limited by the material dimensions of an unforgiving landscape. If Gregor Samsa woke up to a Kafkesque nightmare of metamorphosis into a cockroach, Jallikattu is, in essence, Antony's personal hell. He tries to capture the bull, but fails. A misjudgment on his part results in a second lease of life for the beast, which then tastes human blood. The woman he desperately desires is repulsed by the sight of him. He watches in helpless anger and seething protest as the village rules him incapable of discharging the task at hand, instead calling in Kuttachan, his blood nemesis.

The metaphor of the human-animal conflict comes into play, through the social and cultural lens of the geographic location. When the ancestors of the residents came in from the plains, we are told, the land was nothing but a forest filled with lions and porcupines. “Even if we have settled here, the land still belongs to them. What did we do? We planted a cross on top of the hill,” a villager laughs while narrating the story. This is in reference to the difficult history of settlers and encroachers in the high lands of Kerala, and the often religious backgrounds (of all hues) to those activities.

The movie diverges from the source material—short story Maoist by acclaimed Malayalam writer S. Hareesh—in that the latter extrapolates the parable of the bull to humans being pushed to the margins and broken like butterflies on a wheel. As the end credits of the film roll, we are reminded of Lord of the Flies again. More specifically, the immortal lines by Simon amid a search for 'beastie' on the island: “Maybe there is a beast.....Maybe it is only us.”