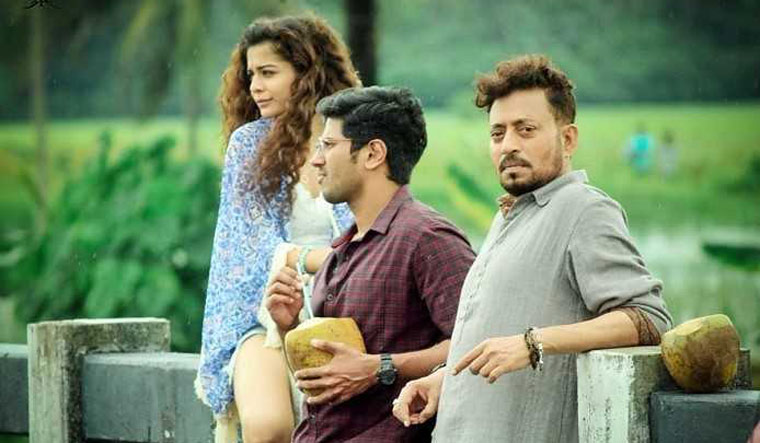 Death can either be a morbid topic or great food for comedy. With Karwaan, director Akarsh Khurana has attempted both. The slice of life drama-comedy starring Irrfan Khan, Mithila Palkar and Dulquer Salmaan, with its share of dark humour can, however, still leave you feeling a bit let down.

The story by Bejoy Nambiar follows Avinash (Dulquer), a techie stuck at a dead-end job, who is informed in the beginning that his father is dead. The movie then literally follows his journey to get his father's body. Karwaan is about the various pit-stops, or rather diversions, he and his friend (Irrfan) involuntarily end up making. The road movie has quite a few bumps along the way in terms of pace and narratives thrown in hotchpotch.

Performances by all three actors make Karwaan worth a watch. Dulquer proves that impact can be made without doing much. Mithila Palkar, who plays a chatty college girl, seems quite at home in her Bollywood debut. Irrfan, who plays a conservative garage owner, adds comedy to the trio's journey with his eccentric commentary. However, only Dulquer's character seems to go through a transitional graph of sorts, with the other two being bystanders. Though they shine as independent characters, chemistry or delightful banter between Irrfan and Dulquer was absent.

While it is good to see a realistic portrayal of characters, their storylines had the potential to be portrayed better. Akarsh Khurana may have done a decent job attempting to portray life with a pinch of salt. But, father-son conflicts and life choices that force you to traverse a difficult path, is a road taken by filmmakers ever so often. And this tends to disappoint an audience who go to the theatre expecting something different. It seems like the characters on route to self discovery in Karwaan get side-tracked somewhat. An unnecessary romance angle is thrown in, two-thirds into the film.

Camerawork by Avinash Arun is superb. He has effectively managed to capture the beauty of the road trip. Dialogues by Hussain Dalal are simple and to the point. Overall, Karwaan makes for an average watch with brilliant, but subtle acting.