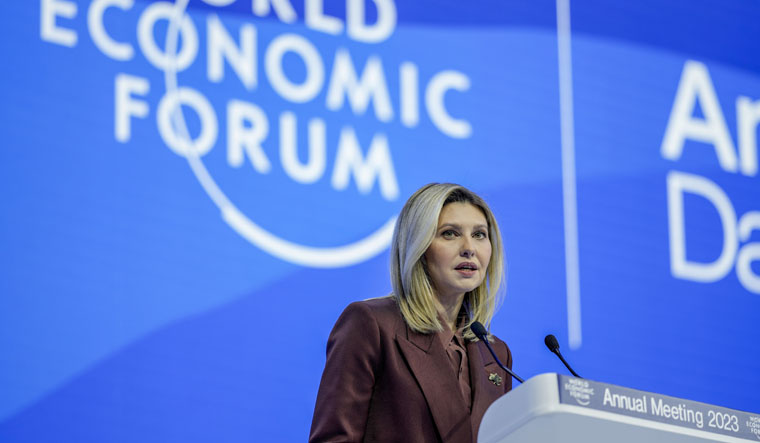 Ukraine's first lady scolded world leaders and corporate executives at the World Economic Forum's annual gathering in the snowy Swiss town of Davos for not all using their influence at a time when Russia's invasion leaves children dying and a world struggling with food insecurity.

As the anniversary of the war nears, Olena Zelenska said Tuesday, “Parents are in tears watching doctors trying to save their children, farmers are afraid to go back to their fields filled with explosive mines and we cannot allow a new Chernobyl to happen,” referring to the 1986 nuclear disaster as Russian missiles have pounded Ukrainian energy infrastructure for months.

“What you all have in common is that you are genuinely influential," Zelenska told attendees.

She spoke as hundreds of government officials, corporate titans, academics and activists from around the world who descended on the town billed as Europe's highest. The weeklong talkfest of big ideas and backroom deal-making prioritises global problems such as hunger, climate change and the slowing economy, but it's never clear how much concrete action emerges to help reach the forum's stated ambition of improving the state of the world.

“We are all internally convinced that there is no such global problem that humanity cannot solve," Zelenska said. “This is more important now when Russia's aggression in Europe poses various challenges."

The war in Ukraine, which has killed thousands of civilians, displaced millions and jolted food and fuel markets worldwide. With the war raising inflation and expanding food insecurity in developing nations, Zelenska called it an insult to mankind and human nature to have mass starvation.

Ukraine and Russia had been key suppliers of wheat, barley and other food supplies to Africa, the Middle East and Asia where many were already going hungry.

About 345 million people in 82 countries are facing acute food insecurity, according to the UN World Food Programme, up from 135 million in 53 countries before the pandemic and war in Ukraine.

Zelenska warned that the war could expand beyond Ukraine's borders and worsen the crises but unity is what brings peace back. European Commission President Ursula von der Leyen urged the assembled executives and global leaders at Davos to keep aiding Ukraine.

“And my call on you is: We need every helping hand on board. Ukraine deserves to have as much support as possible."

Zelenska said Ukrainians can't take a day off from war" and that they have to risk their lives each day" but said she believed the world would unify for peace.

Her husband, President Volodymyr Zelenskyy, will be beamed in by video Wednesday to complement the in-person delegation of his wife and officials such as Minister of Digital Transformation Mykhailo Fedorov.

Davos offers a new chance for Ukrainian envoys to ramp up international support for donations of weapons like tanks and anti-rocket defences and greater pressure to further isolate and squeeze Russia's economy.

France, the UK, the US and other nations are vowing to send increasingly powerful weapons to Ukraine, such as tanks or armoured combat vehicles.