'This winter is about survival,' Ukrainians told to brace for harsh days

Russian airstrikes have destroyed half of Ukraine's energy infrastructure 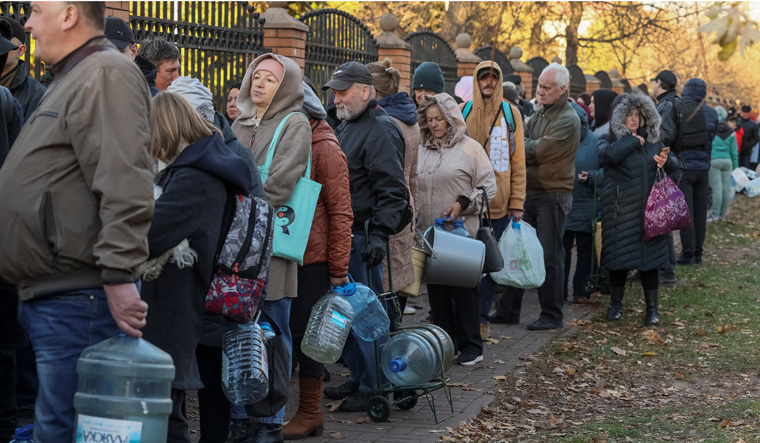 As Russian missiles continue to pound Ukrainian energy infrastructure, hindering water and electricity supply, authorities are warning the people to prepare for the worst.

Sergey Kovalenko, the CEO of private energy provider DTEK Yasno, has said that his company is under instructions from Ukraine’s state grid operator to resume emergency blackouts in the areas, including the capital Kyiv and the eastern Dnipropetrovsk region.

“Although there are fewer blackouts now, I want everyone to understand: Most likely, Ukrainians will have to live with blackouts until at least the end of March," Kovalenko warned on Facebook.

"We need to be prepared for different options, even the worst ones. Stock up on warm clothes and blankets. Think about what will help you wait out a long shutdown," he told Ukrainian residents.

The situation has come to the attention of the World Health Organisation (WHO) which warned the people about the impending life-threatening winter this year. According to WHO regional director Hans Henri P Kluge, half of Ukraine’s energy infrastructure is either damaged or destroyed.

"This is already having knock-on effects on the health system and on people’s health," he added, while warning that the "this winter will be about survival." The prediction is that up to three million Ukrainians could leave their homes in search of warmth and safety.

Ukrainian President Volodymyr Zelenskyy too has confirmed that  Russian missile strikes have damaged more than half of the country’s energy facilities.

The situation is starting to be dire as authorities have started evacuating civilians from recently liberated sections of the southern Kherson and Mykolaiv regions as they fear the winter would be too harsh.

Winters are often harsh in Ukraine, and it has already started to snow in many parts, including Kyiv.

The health system in the country is also facing a dark situation as the air raids have left most hospitals and health care faccilities unoperational. According to the WHO head, the healthcare facilities are lack fuel, water and electricity to meet basic needs.

Zelenskyy, meanwhile, has promised to set up shelters to provide heat and water for citizens. In his address to the nation, Zelensky said that special "invincibility centres" will be set up around Ukraine to provide electricity, heat, water, internet, mobile phone connections and a pharmacy, free of charge and around the clock.

"If massive Russian strikes happen again and it's clear power will not be restored for hours, the 'invincibility centres' will go into action with all key services," Zelensky said.