One dead, 13 injured in twin blasts in Jerusalem

There has not been such a coordinated attack in Jerusalem for many years: police 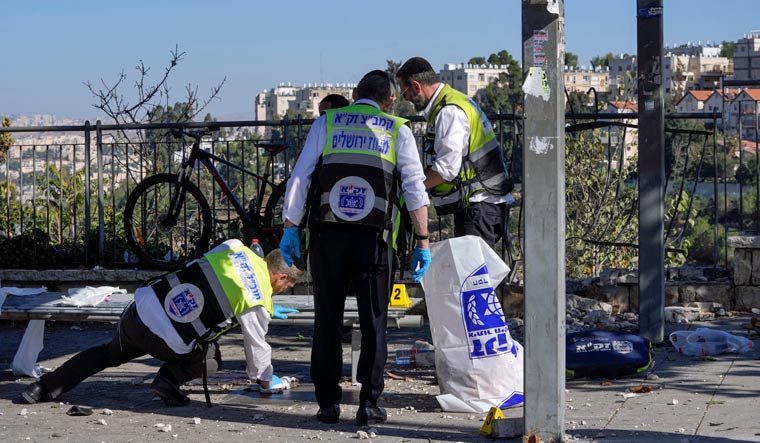 Members of Zaka Rescue and Recovery team clean blood from the scene of an explosion at a bus stop in Jerusalem, Wednesday, Nov. 23, 2022 | AP

The police are calling it a 'combined attack'. "There has not been such a coordinated attack in Jerusalem for many years," police spokesman Eli Levi told Israeli Army Radio. The police are on the lookout for suspects. "Terrorism is a dead-end that accomplishes absolutely nothing," the U.S. Embassy wrote on Twitter of the coordinated attacks. The European Union, the United Nations and the US condemned the attack.

The West Bank in recent months has been facing violence thanks to a military crackdown launched in the wake of a series of deadly Palestinian attacks in Israel. Abdel-Latif Al-Qanoua a spokesman for the Palestinian militant group Hamas praised the Jerusalem explosions.

Two paramedics from Magen David Adom, Israel’s Red Cross affiliate, told CNN, “We were at the MDA station by the entrance to the city when we heard a large explosion.” “We immediately headed to the scene in large numbers, including ambulances, MICUs (mobile intensive care units) and medicycles,” they added.