The ship carries 26,527 tonnes of corn for Lebanon 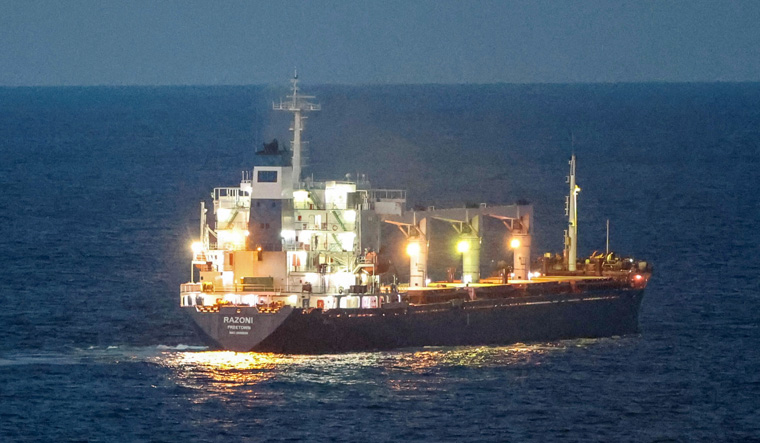 The first grain ship to depart from Ukraine during the ongoing war with Russia reached Turkish waters safely on Tuesday. The ship would be inspected by a joint committee before further travel.

The first ship, the Razoni, carrying 26,527 tonnes of corn to Lebanon, anchored near the Bosphorus entrance from the Black at around 1800 GMT, some 36 hours after departing from Ukraine's Odesa port, Reuters reported.

The publication reported that a senior official said Ankara expects roughly one grain ship to depart from Ukraine every day as long as the export agreement holds. A delegation from the Joint Coordination Centre (JCC) in Istanbul, were Russian, Ukrainian, Turkish and U.N. personnel

work, is expected to inspect the ship at 0700 GMT on Wednesday, according to Turkey's Defence Ministry.

conflict that has become a drawn-out war of attrition."We hope that there will be some more outbound movement tomorrow," U.N. spokesman Stephane Dujarric was quoted saying in New York by Reuters.

"This is delicate, complex and complicated, but there are other movements planned. "Dujarric said there were about 27 ships in the three Ukrainian ports covered by the export deal that had been

"sitting in port for a long time with cargo, with contracts signed, ready to go."The exports from one of the world's top grain producers are intended to help ease a global food crisis.

As part of the agreement, the four parties are monitoring shipments and conducting inspections from the JCC in Istanbul, which straddles the Bosphorus Strait that connects the Black Sea to world markets.