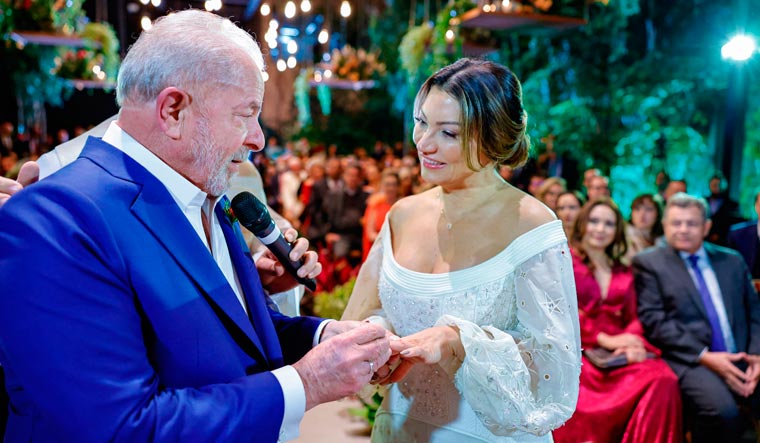 Lula, 76, and Janja, 55, tied the knot at a Roman Catholic ceremony in the upscale Brooklin neighborhood of Sao Paulo |AP

The 76-year-old leftist politician, who is seeking a third term, started his relationship with sociologist Rosangela Silva, 55, while he was in jail on charges of corruption in 2017. Known to Brazilians as Lula, this is his third marriage. His first wife died in 1971, two years after they married. He has four children from his second wife Marisa Leticia. She died of a heart attack in 2017 after being  married for 43 years.

Fearing protests by Bolsonaro supporters, wedding ceremony and location were kept confidential. Guests numbering about 200 were told to leave their cell phones in the coatroom, according to local media. “A man who is 76 years old and is in love like I am, willing to get married, can only want good things for this country,” he reportedly said during the marriage ceremony.

Soon after the wedding, Lula’s bio on social media channels was updated to add that he is now “Janja’s husband.”

Determined to end right-wing President Jair Bolsonaro's rule, Lula has sought to characterise the presidential race as a fight between love and hatred.

Lula, who was a lathe operator four decades ago, began his political career as a union leader and rose to become the president of Brazil in four decades.