The earthquake that shook Lisbon and Carmo Convent

No Lisbonite will ever forget November 1, 1755 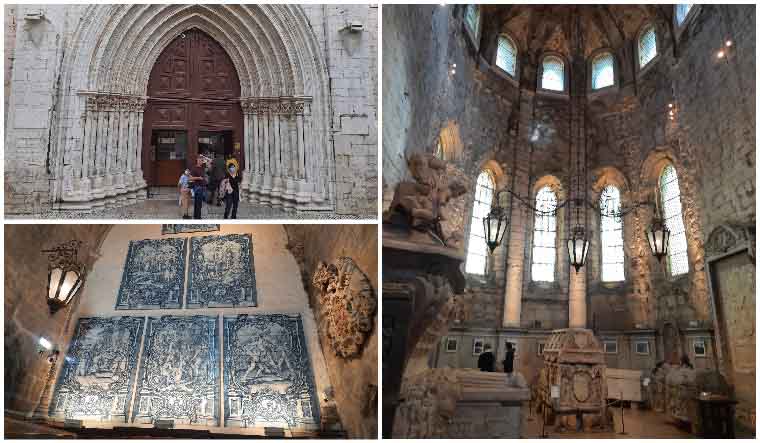 No Lisbonite will ever forget November 1, 1755—the day that shook, crumbled and wrecked the greatest and wealthiest city of the Portuguese empire into mere rocks and dust.

It has been almost a month in Lisbon and I have been roaming around the streets, enjoying the beautiful sunsets, the wine and the history. They have never failed to surprise me. I have been a regular visitor at the studio of Helder Carita, architect-turned-historian and visual artist, in Atalaia—a small street near the beautiful Jardim de Sao Pedro de Alacantra (Garden of St. Peter of Alacantra). From there, we could see the old streets of Rossio and get a great view of the city. I always walk to the studio, to stroll around the streets of Rossio, Baixa-Chiado and Bairro Alto. The crowd, pastry shops, boutiques and the smell of brewing coffee from the historic Brasileira Café amaze me every time.

Even though I pass by these places twice or thrice a week, it never occurred to me that the famous Carmo Convent was right there. The monument became a museum in 1864. One day, I took the ticket and entered through the remains of the big façade into the hall of the church. To know the tale of the Carmo Convent, one has to take a walk from the 14th to the 19th century.

Carmo Convent was a monastery founded in 1389 by the Constable D. Nuno Álvares Pereira, a military commander of King John I. It was one of the most beautiful gothic churches in Lisbon. It was a small Carmelite convent before being reconstructed as a monastery. In 1407, the liturgical area of the church was completed. By 1423, the residential rooms were completed, making it a fully functional monastery. The Carmelite monks from Moura (a place in southern Portugal) came to stay and pray here, including Nuno Àlvares Pereira who donated his wealth to the convent and became a priest. He was later called Father Nuno de Santa Maria.

On a cold morning of November 1, 1755, Lisbon was gearing up to celebrate All-Saint’s Day. Lisbon was a religious city, and most of the families were getting ready or already at the churches. A large number of people gathered at the Carmo Convent. All houses were lit by candles and the whole city was decorated. Around 9:40am, tremors started, and in less than 10 minutes, it shook the whole city. Churches, buildings, monasteries, libraries, houses and even forts shook and were wrecked in the earthquake, which was measured at 8.6. “The Carmo Convent being very close to the port where the quake started, was affected severely. In the middle of the mass, the roof fell, glasses shattered and the whole foundation of the legendary monument was in pieces in less than 10 minutes. It was absolute chaos,” says Helder.

A crowd ran into the Terreiro do Paço (palace courtyard), which was one of the open spaces nearby. The yard faced the Tagus River, and 30 minutes after the quake, came the tsunami. “The tsunami was almost 10m in height and nearly wiped out the coasts and islands of Portugal, Spain and Morocco. The earthquake was so strong that people in faraway Barbados and Finland felt the tremors,” says Tiago Molarinho, an architect and researcher at Helder’s studio.

That same night, when the survivors managed to get hold of their lives, they were again tested by nature with a massive firestorm in the city, caused by the candles and lamps which were lit for the All-Saint’s Day. The city is surrounded by three hills and the fire spread in minutes. It raged on for almost six days. A document describes the incident as “hellfire unleashed on the city” and the temperature was said to be more than a 1,000 degree Celsius. The fire destroyed the Carmo Convent and its library, which was one of Europe’s best.

Around 90,000 people died. During the firestorm, escaped convicts looted and murdered people for money and valuables. They were publicly executed later.

Almost 85 per cent of the city was destroyed and the city was rebuilt and brought to order by Sebastião José de Carvalho e Melo, 1st Marques de Pombal, a Portuguese diplomat and statesman who served as the chief minister to King Jose I, the then king of Portugal. He designed the central area of Lisbon to be earthquake resistant. “His architectural design was thus called Pombaline style in the 18th century. The buildings and squares of the Pombaline Downtown of Lisbon are made with the world’s first anti-seismic design technology and now remain a great tourist attraction” Helder says.

The reconstruction of the convent began in 1756 and many minor repairs were made, but till today, since 1834, the monument remains unfinished. As we enter the church, the hall is wide open and filled with the broken remains and relics of the church on both sides for display. The roof is wide open but we can still see the pillars and the roof. The remains of the altar are in the front, and behind it, is the sacristy. I walked around and visualised the 1755 disaster. The museum holds several other relics donated from other parts of the world, too. It seemed odd as it has nothing to do with the church or its history. As we pass left of the sacristy, there is an audio-visual room which depicts the story of the earthquake and the convent. Unfortunately, today the monument only looks ‘similar’ to its original architecture, thanks to rebuilding and repairs. The original model of the convent can be viewed inside the museum.

As I came out, my mind was full of questions and images of the chaos and destruction. I looked back again, and I could hear the cries and the fire razing down the building.