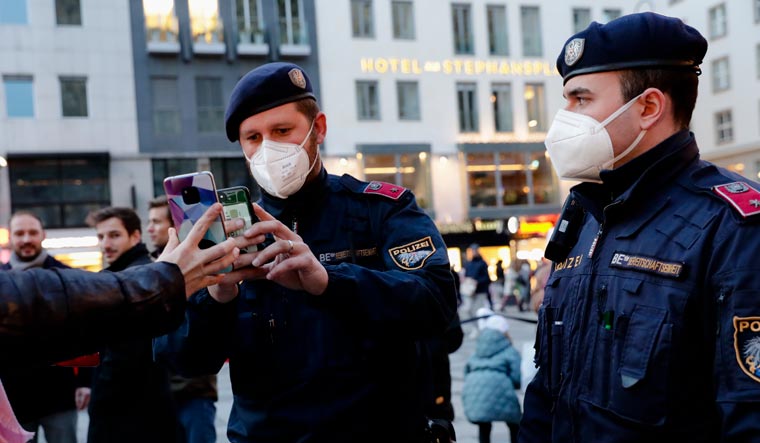 Police check the vaccination status of visitors during a patrol of a Christmas market in Vienna, Austria | AP

Europe is reeling under an unabated surge of coronavirus cases, with the World Health Organisation stating that the continent was the hot spot of the pandemic right now—it is the only region where COVID-19 deaths are rising. The autumn surge of infections is overwhelming hospitals in many Central and Eastern European nations, including Ukraine, Russia, Romania, the Czech Republic and Slovakia.

In its weekly report on the pandemic issued late Tuesday, WHO said COVID-19 deaths in all regions other than Europe remained stable or declined, and totalled 50,000 worldwide last week. Of the 33 lakh new infections reported, 21 lakh came from Europe. It was the seventh consecutive week that COVID-19 cases continued to mount across the 61 countries WHO counts in its European region.

There is also a stark difference in vaccination numbers between the western and eastern sectors of the continent. While about 60 per cent of people in Western Europe are fully immunised against COVID-19, only about half as many are vaccinated in the eastern part of the continent, where widespread vaccine hesitancy has been reported.

The region is currently on knife's edge. Over the past several days, there have been many anti-vaccination marches in European nations as one government after another tightened measures. Dutch police arrested more than 30 people during unrest in The Hague and other towns in the Netherlands on Saturday, following much worse violence the previous night.

Germany's health minister Jens Georg Spahn issued a dire warning—the rapid rise in coronavirus cases means "it is likely everyone in the country who isn't vaccinated will have caught COVID-19 by the end of the winter and some of those will die". As of Monday, more than 30,000 cases have been confirmed in Germany over 24 hours, an increase of about 50 per cent compared to one week ago. The country is this week expected to pass 1,00,000 coronavirus-related deaths since the start of the pandemic. Hospitals have warned that ICU capacities are nearly exhausted, with some patients having to be transferred to other clinics far away.

Spahn urged Germans to get vaccinated, including with booster shots if their first round of inoculation occurred more than six months ago, to reduce the risk of serious illness. "By the end of this winter pretty much everyone in Germany will have been vaccinated, recovered or died," Spahn told reporters in Berlin. He acknowledged some had described this view as cynical. "But it is true. With the highly contagious delta variant, this is very, very likely, and that is why we are recommending vaccination so urgently," said Spahn.

Austria went into a nationwide lockdown early on Monday in a desperate effort to contain spiralling coronavirus infections, even as the country is facing widespread protests because of a vaccine mandate that was imposed. The lockdown in the Alpine nation comes as average daily deaths have tripled in recent weeks and some hospitals have warned that their intensive care units are reaching capacity. The lockdown will last at least 10 days but could extend to 20, officials said. People will be able to leave their homes only for specific reasons, including buying groceries, going to the doctor or exercising.

Austrian Chancellor Alexander Schallenberg also announced last week that Austria will introduce a vaccine mandate as of February 1. The details of how the mandate will work aren't yet clear, but the government has said that people who do not adhere to the mandate will face fines. Schallenberg apologised to all vaccinated people on Friday, saying it wasn't fair that they had to suffer under the renewed lockdown restrictions.

Tens of thousands of people demonstrated through Central Brussels on Sunday to protest reinforced COVID-19 restrictions imposed by the Belgian government to counter the latest spike in coronavirus cases. Several hundred people started pelting police, smashing cars and setting garbage bins ablaze. The police responded with tear gas and water cannons and sought to restore order as dusk settled on the Belgian capital. The marchers came to protest the government's strong advice to get vaccinated and any possible moves to impose mandatory shots.

Shouting 'Freedom! Freedom! Freedom!' and singing the anti-fascist song Bella Ciao, protesters lined up behind a huge banner saying 'Together for Freedom' and marched to the European Union headquarters. Amid the crowd, the signs varied from far-right insignia to the rainbow flags of the LGBT community.

Police fired warning shots, injuring an unknown number of people, as riots broke out Friday night in downtown Rotterdam in the Netherlands, at a demonstration against plans by the government to restrict access for unvaccinated people to some venues. Police said in a tweet that there are injuries in connection with the shots during the violent unrest. Riot police used a water cannon in an attempt to drive hundreds of rioters from a central street in the port city. Video from social media shown on Dutch broadcaster NOS appeared to show a person being shot in Rotterdam, but there was no immediate word on what happened.

The Czech Republic and Slovakia reported record daily numbers of new coronavirus cases Wednesday, a day before the governments of the neighbouring European countries plan to approve new restrictions in response to rising infections. The Czech daily tally soared to 22,479 new cases, eclipsing the previous record set January 7 by almost 5,000 and nearly 8,000 more than a week ago. The country's infection rate rose to 813 new cases per 1,00,000 residents over the past seven days, up from 558 a week earlier.

Czech Prime Minister Andrej Babis said the government is considering several options, including following neighbouring Austria in ordering a lockdown for unvaccinated residents. Another measure under review is no longer allowing people to attend public events or go to bars and restaurants based on coronavirus test results.

Slovakia reported 8,342 new virus cases, surpassing the previous record of 7,244 set Friday. The Slovakian government is planning new restrictions on unvaccinated people as the country's hospitals are getting overwhelmed with COVID-19 patients.