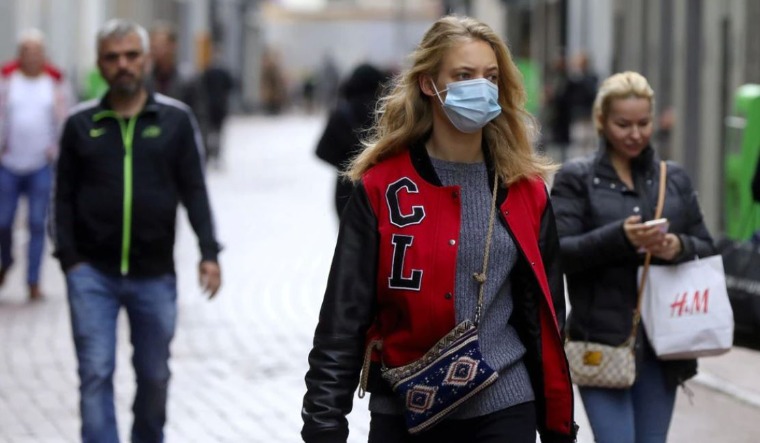 File: People with and without protective masks walk on the street while shopping as the spread of coronavirus disease (COVID-19) continues in Amsterdam, Netherlands October 7, 2020 | Reuters

Germany's national disease control centre reported a record-high number of more than 50,000 daily coronavirus cases Thursday as the country's parliament was set to discuss legislation that would provide a new legal framework for coronavirus measures.

The Robert Koch Institute registered 50,196 new cases, up from 33,949 daily cases a week earlier. Unlike some other European countries, Germany has baulked at making vaccinations mandatory for certain categories of workers. Yet the country has struggled to find ways to persuade more people to get shots voluntarily. The parties that are expected to form the next government plan to introduce legislation that would allow an 'epidemic situation' declaration to expire at the end of the month. The epidemic declaration had been in force since March 2020. The declaration had enabled federal and state governments to order measures to contain COVID-19 without approval of national and regional legislatures.

After Germany's Robert Koch Institute for Infectious Diseases announced a record number of COVID-19 cases in a single day, Chancellor Angela Merkel called for an emergency meeting with state governors on Wednesday.

France's Ministry of Health, on Wednesday, recorded 11,883 new cases, the second day in a row with a total of more than 10,000 new cases. Health Minister Olivier Veran said France is in the midst of a fifth wave of the coronavirus outbreak.  Since roughly mid-October, new cases have increased by double-digit percentages week after week.

"Several neighbouring countries are already in a fifth wave of the COVID epidemic, what we are experiencing in France clearly looks like the beginning of a fifth wave," Veran told Reuters.

Bulgaria activated the European Union's civil protection mechanism on Wednesday, a status that allows member states to request aid in the event of catastrophes or other emergencies. The nation sought oxygen apparatus, patient monitoring, and hospital beds after reporting 334 COVID-19 patient fatalities on Tuesday, the country's greatest daily toll since the pandemic began.

According to WHO, the number of new cases in the EU rose by 7 per cent and the number of COVID-19-related deaths rose by 10 per cent in the last week. In its weekly epidemiological COVID-19 update, the World Health Organization stated that Europe was once again dominating the world in terms of new cases and deaths from the disease.

The Slovak Health Ministry reported that the daily increase of new infections hit 7,055 on Tuesday, surpassing the previous record last week. Since late October, Russia has reported 40,000 cases and over 1,100 deaths every day.

On Tuesday Pfizer filed a request seeking approval of the Food and Drug Administration to make booster shots of its COVID-19 vaccine available to all Americans above the age of 18.

On Thursday, a pandemic advisory council in the Netherlands advised implementing Western Europe's first partial lockdown since the summer, increasing pressure on the government to adopt unpalatable measures to combat a COVID-19 outbreak. On Friday, Caretaker PM Mark Rutte's cabinet is due to make a decision on steps based on the Outbreak Management Team's recommendations.

Despite an adult vaccination coverage of about 85 per cent, hospitals in parts of the Netherlands have been forced to curtail routine care in order to treat COVID-19 patients. The UK is using booster shots of the COVID-19 vaccine to raise immunity and avoid overburdening the healthcare system.

Around 56 per cent of Dutch COVID-19 hospital patients and 70 per cent of those in intensive care were unvaccinated or only partially vaccinated last month.

According to data published by the Netherlands' Institute for Health, unvaccinated COVID-19 patients in Dutch hospitals had a median age of 59, compared to 77 for vaccinated patients.