The Ka-52K is a derivative of the Ka-52, which is in service with Russian military 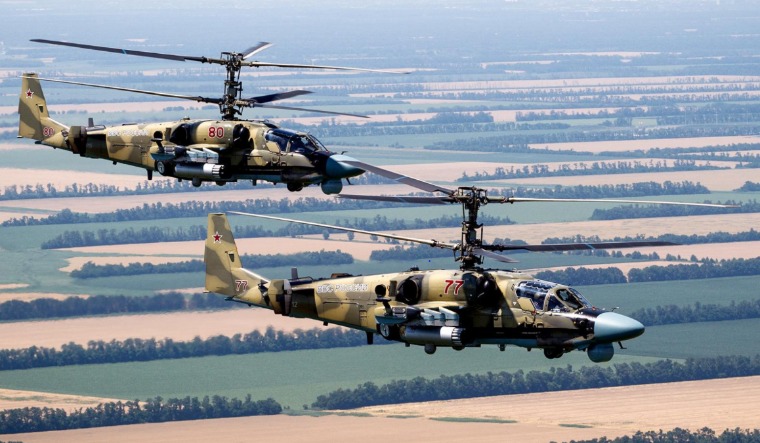 Over the last week, news organisations covering China reported that the People's Liberation Army Navy (PLAN) was considering buying up to 36 Ka-52K attack helicopters from Russia.

On Monday, The South China Morning Post quoted Zhou Chenming, a researcher, as saying, "The People’s Liberation Army has studied the possibility of buying Russian Ka-52Ks for quite a long time. The Type 075 landing helicopter dock needs a heavy attack helicopter." Zhou is an expert with the Yuan Wang military science and technology institute in Beijing. "The Ka-52K is the Russian Navy’s first ship-borne attack helicopter with folding blades and wings with higher take-off weights, which can save space and fulfill the needs of the PLA’s Type 075 LHD," Zhou explained.

The publication quoted a source as saying China could not produce a "heavy armed helicopter" to meet the needs of the Type-075.

The Ka-52K is a derivative of the Ka-52 attack helicopter, which is in service with the Russian military. The Ka-52 and Ka-52K use the characteristic 'coaxial' rotor design of the Kamov helicopter family, with two sets of rotors, one on top of the other; such helicopters typically lack a tail rotor found on most other helicopters.

Helicopters with coaxial rotors are considered more agile and have improved payload carriage capacity for the same weight. The Ka-52K was unveiled to the public in 2015; the Russian defence ministry ordered 32 helicopters of the type that year. The Ka-52K differs from its land-based counterpart in having a more powerful radar that allows it to detect targets up to 200km away, enabling it to fire heavy anti-ship missiles, which have a range of over 100km. This is a capability not found on other attack helicopters, which can carry only short-range missiles to attack ships.

The Ka-52K retains the Ka-52’s capability to carry anti-tank missiles and has a 30mm gun to destroy lightly armoured targets on the ground or in the air. The capability to carry both long-range anti-ship missiles and shorter-range anti-tank weapons would make the Ka-52K an asset in the event of conflict with Taiwan, which has a sizeable navy and land-based defences to deter a Chinese invasion.

The Ka-52K is significantly heavier than China's indigenous Z-10 helicopter, which has a maximum take-off weight of around 7 tonnes. As the Ka-52K weighs around 12 tonnes, it can carry a heavier payload of weapons and also more armour to protect the crew from enemy fire. Both the Ka-52K and Z-10 are twin-engine helicopters.

However, the early variants of the Z-10 were believed to be incapable of carrying a heavy weapons load due to the poor performance of their WZ-9 engines. Media reports claimed the inadequate engine performance was one of the reasons why Pakistan rejected the Z-10 in favour of the Turkish-built T-129 attack helicopter. The WZ-9 engine is believed to have a power output of 1,300HP, nearly half the 2,500HP capacity of the Klimov VK-2500 engines that power the Ka-52K.

Interestingly, ever since the Ka-52K project was announced, Russian officials have said the Indian Navy was a prospective customer.

Kamov chief designer Sergei Mikheyev said in August 2014, “Upon request from the Indian Navy, we are ready to supply jointly with Russian Helicopters the necessary number of seaborne helicopters and offer the latest developments to the Indian side, including the Ka-52K helicopters."