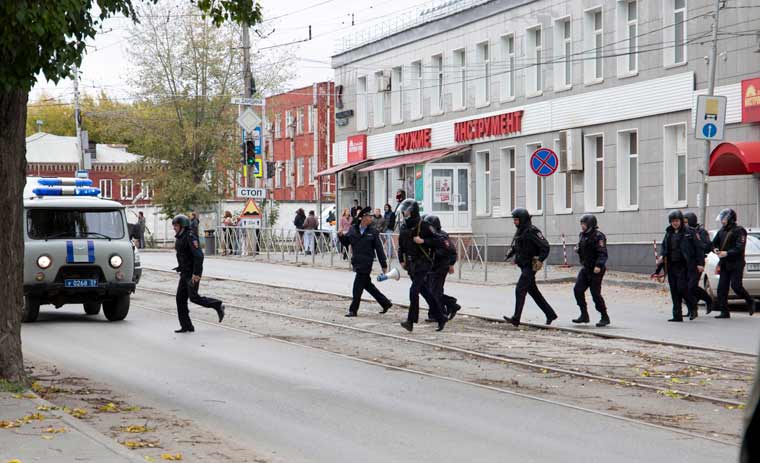 Perm: Police officers run to the Perm State University in Perm, about 1,100 kilometers (700 miles) east of Moscow, Russia, Monday, Sept. 20, 2021. A gunman opened fire in a university in the Russian city of Perm on Monday morning, leaving around eight people dead and others wounded, according to Russia's Investigative Committee | AP

Following a shooting at a Russian university on Monday that left six people dead, the Indian Embassy in Russia said it was in touch with local authorities and representatives of Indian students and that all Indian students at the Perm State Medical University were safe.

"Shocked at horrific attack at Perm State University in Russia; our deep condolences for loss of life and best wishes for early recovery of those injured," the embassy tweeted.

Embassy is in touch with local authorities and representatives of Indian students. All Indian students at Perm State Medical University are safe. (2/2)@PMOIndia @narendramodi @DrSJaishankar @MEAIndia

Six people have been killed and 28 injured, according to Russia's Investigative Committee, with the suspected shooter shot and injured after he resisted arrest.

President Vladimir Putin was notified of the shooting, with Russia's health and science ministers ordered to travel to Perm located around 1,400km from Moscow, to coordinate assistance for the victims.

"The president expresses sincere condolences to those who have lost family and loved ones as a result of this incident," Putin's spokesman Dmitry Peskov told reporters. Classes at local schools, colleges and universities were cancelled on Monday.

According to Russian news agency TASS, a highway patrolman who was the first to arrive on the scene successfully disarmed the shooter following a gun battle, and then administered first aid to him. The shooter is now recuperating in hospital, and faces multiple homicide charges.

According to the Investigative Committee, the shooter was a student at the university and carried out the shooting with a hunting rifle he purchased earlier this year.

This was the second mass shooting in Russia this year that targeted students. In May, a 19-year-old opened fire in his old school in the central city of Kaza, killing nine people.