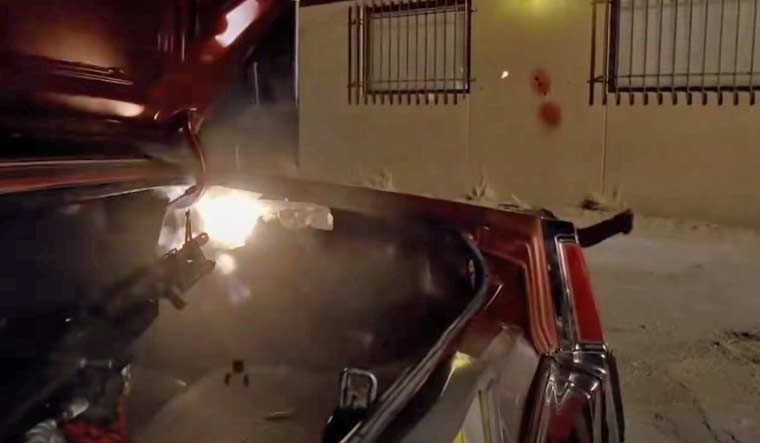 Screenshot from the season finale of Breaking Bad, showing an M60 machine-gun mounted inside the boot of a car. A similar contraption was reportedly used in the assassination of Iranian nuclear scientist Mohsen Fakhrizadeh last year | AMC

Last year, an Iranian nuclear scientist long considered Mossad's top target was assassinated while travelling in a vehicular convoy in the city of Absard in northern Iran. Mohsen Fakhrizadeh, believed to have led Iran's nuclear bomb project, was killed in an ambush on November 7, 2020.

Initial reports of the ambush were contradictory: Some reports claimed he was targeted by a group of assassins who engaged his bodyguards in a gunfights. Another, wilder claim, was that a remote-controlled robot was used to kill him. The robot theory, initially postulated by Fars and derided on social media, has now been confirmed by a New York Times investigation, citing American, Israeli and Iranian officials

According to the NYT report, a Belgian-made FN MAG machine gun was smuggled part by part into Iran, where it was mounted onto a robotic apparatus in a Zamyad (an Iranian company that manufactured Nissan vehicles under license) pickup truck. The one-ton apparatus included cameras facing multiple directions, which beamed video feed to a command room thousands of kilometres away, via satellite.

Israel used a special model of a Belgian-made FN MAG machine gun, similar to this one, attached to a robotic apparatus [to kill Fakhrizadeh.]https://t.co/TqkSgUhlnR pic.twitter.com/wm2Vw5Cndv

A 1.6-second lag between the camera feed and the gun's actions was the only obstacle that faced Mossad operators who remotely controlled their robotic assassin. An AI model was programmed to compensate for the delay, the shake, as well as the car's speed.

The depth of the operation has now become apparent, with NYT saying a decoy car had been placed earlier along the convoy's route, with a camera installed to check the identity of the occupants and ensure that the person driving the car was Fakhrizadeh.

Once confirmed, the car carrying the remote-operated machine gun was cleared to engage once the convoy reached it. Such was its precision that it aimed at Fakhrizadeh but not his wife sitting next to him, and continued to target him even as he crouched behind the door of the car after stopping it. He was struck in his shoulder and then his spine, injuring him fatally.

The car was then programmed to explode, in a bid to destroy evidence of the remote-controlled gun. However, the explosion failed to destroy the evidence.

The similarities between this ambush method and a scene from the TV series Breaking Bad may be worth noting. Spoiler alert ahead for those who have not seen the show.

In one sequence, an M60-machine gun is placed inside the boot of a car, which is then parked in front of the villains' hideout. The gun was rigged to a rotating mechanism, and was designed to keep firing upon a fixed radius until it ran out of bullets. The gun is triggered remotely by the car key of Walter White, chief protagonist, and was designed to kill everybody inside the hideout.

The scene was so iconic Mythbusters went on to demonstrate whether it was plausible to replicate in real-life. Another spoiler alert: It was.

While the Mythbusters' replication showed significant variation in the gun's accuracy due to its recoil, the real-life example deployed by Israel apparently utilised an "intelligent satellite system" using AI to correct for this, according to the Iranian Revolutionary Guards assessment.

Israel neither denied nor confirmed its role in the killing of Mohsen Fakhrizadeh.