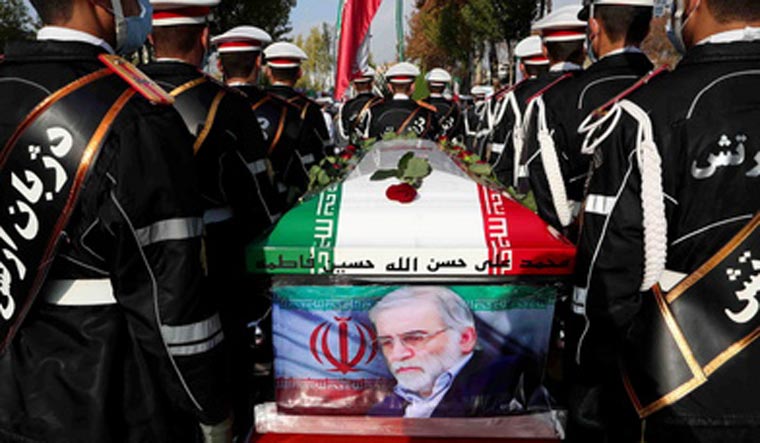 Conflicting accounts have emerged of the mode of assassination of Iran’s top nuclear scientist Mohsen Fakhrizadeh on Friday, with semi-official news agency Fars now reporting that he was targeted by a remote-operated machine gun.

According to Fars’ Persian website, Fakhrizadeh got out of his car after hearing bullets striking the vehicle, thinking there had been a collision or engine problem. He was then fired upon by an ‘automatic remote-controlled machine gun’ from a Nissan car, parked 150m away, with two bullets hitting him in the spine and one in the back. While his bodyguards attempted to shield him, the car then exploded.

However, there are conflicting accounts of this. Fars’ English website cites ”eyewitness accounts” saying Fakhrizadeh’s car came under attack “first by a blast and then by terrorists who sprayed bullets at his car.”

In addition, Iran’s top national-security official Ali Shamkhani on Monday said that the assassination was carried out “using electronic equipment and there was nobody on the scene".

Fars claims that early in 2018, “Israeli sources” had acknowledged that Mossad had tried to assassinate an Iranian nuclear scientist, but that its operation failed.

The country’s foreign minister had earlier alleged that Israel was behind the attack.

Remote-controlled guns have been around since World War II. However, besides advanced weapons stations in use as side armaments to tanks and armoured personal carriers that are deployed by most militaries, there are also cases of Gerry-rigged machine guns that can be turned into remote-controlled turrets. During the Syrian Civil War, terrorist and insurgent groups were known to use teleoperated weapons systems such sniper rifles that could be remotely controlled, or small vehicles mounted on motorised carts.

The claim sparked some jokes on social media as users compared the idea of a Nissan gun with a mounted machine gun to the eponymous Transformers made popular by the Michael Bay films.

On Saturday, Iranian Supreme Leader Ayatollah Khameini also took to Twitter to blame Israel. “Mr Mohsen Fakhrizadeh was killed by the oppressive enemies. This rare scientific mind lost his life for his everlasting great scientific work. He lost his life for God and the supreme leader."

Fakhrizadeh’s funeral was held on Monday, and attended by several high-ranking Iranian officials.