China's most advanced warship entered US EEZ near Alaska? 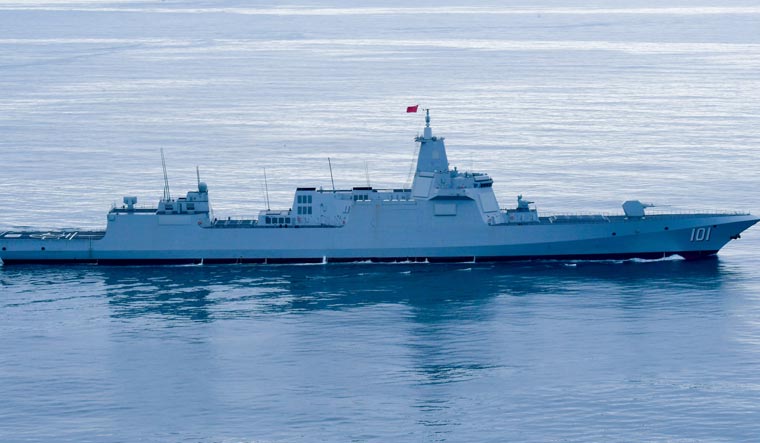 The US Coast Guard recently released images of a fleet of four ships of China's People's Liberation Army Navy (PLAN) sailing near a US Exclusive Economic Zone (EEZ) near Alaska's Aleutian Islands.

The action comes even as China opposes frequent passage of ships of the US Navy and its allies through contested waters of the South China Sea.

US defence website The Drive reported the images were shot between August 29 and 30, but were released only recently by the US government's Defense Visual Information Distribution Service (DVIDS). The Drive reported that the original caption provided by DVIDS stated, "the PLAN task force included a guided missile cruiser, a guided missile destroyer, a general intelligence vessel, and an auxiliary vessel."

Interestingly, the caption was subsequently modified to remove references to types of ships. The DVIDS caption now says, "During a routine maritime patrol in the Bering Sea and Arctic region, U.S. Coast Guard Cutter Bertholf spotted and established radio contact with Chinese People’s Liberation Army Navy (PLAN) task force in international waters within the U.S. exclusive economic zone, Aug. 30, 2021. All interactions between the U.S. Coast Guard and PLAN were in accordance with international laws and norms. At no point did the PLAN task force enter U.S. territorial waters."

China's state-run Global Times reported the four ships were likely from a flotilla that passed east from the Soya Strait on August 24, which would have meant a course bringing them near Alaska. The four ships were identified as the "Type 055 destroyer Nanchang, the Type 052D destroyer Guiyang, a Type 903A supply ship with hull number 903, and a surveillance ship with hull number 799" by the Japan Maritime Self-Defense Force.

The US Navy classifies the Type 055 as a 'cruiser'. The Type 055 class of ships is the most advanced surface warship built by China, to date, and is equipped with an advanced radar system capable of engaging multiple targets in the air. With a length of around 180 metres and a displacement of around 13,000 tons, the Type 055 class is bigger than most surface combatants in the world, excluding aircraft carriers and amphibious assault ships.

Since 2020, China is believed to have inducted three Type 055 class vessels into the PLAN. A single Type 055 class warship can carry over 100 missiles capable of hitting targets in the air, sea, land and underwater. It is also equipped with artillery guns, torpedoes and helicopters. According to current US government estimates, the PLAN aims to have at least eight Type 055 warships.

The Global Times noted the passage of ships near Alaska “could also be seen as a countermeasure against US military provocations on China's doorsteps in the name of freedom of navigation".

Wei Dongxu, a Beijing-based military expert, told Global Times "The flotilla, led by the... Type 055 destroyer, displayed the PLA Navy's rapid development in far-sea capabilities as Chinese warships are expected to train in more distant, unfamiliar waters in the future."

The PLAN had made a similar passage off Alaska in September 2015. At that time, five warships were involved in the passage, which the US described as “innocent passage” passing within 12 nautical miles of the Aleutian Islands.