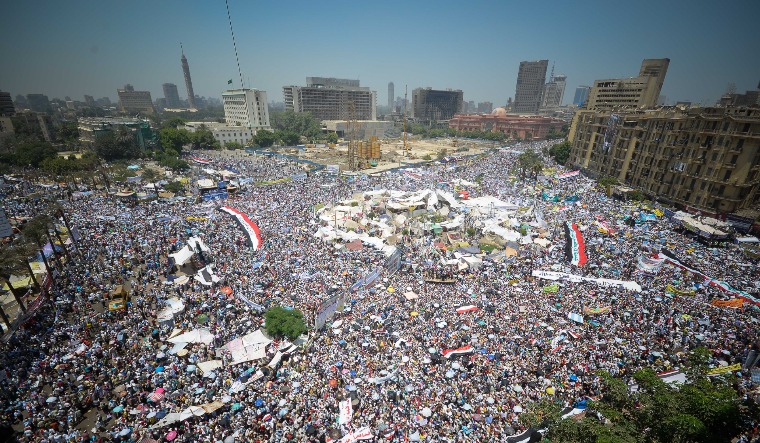 When a street vendor who was barely 27 set himself ablaze in the Tunisian city of Ben Arous in December 2010, no one foresaw how the flames he lit would engulf large parts of the Arab world.

Mohamed Bouazizi committed the extreme act as he was angry with local officials who had confiscated his wares and humiliated him. Bouazizi died on January 4, 2011. By then, much of Tunisia was moved by his act and had risen in protest against the dictatorship of president Zine al-Abidine Ben Ali.

The protests that began in the wake of Bouazizi's death focussed on the poverty, corruption and unemployment in Ben Ali's rule. Ben Ali, who had come to power in a coup in 1987, stepped down on January 14 that year and fled to Saudi Arabia.

The embers sparked by what had become known as the 'Jasmine Revolution' in Tunisia soon spread to Egypt, Libya, Syria, Morocco and Yemen, felling a handful of Arab strongmen dictators along the way. Protests also erupted in the small Gulf Sheikdom of Bahrain, led by the majority Shia community, who were upset at their political marginalisation.

The uprisings, collectively referred to as the Arab Spring, captured and captivated the world's attention. Many saw the revolutions in the Arab world as a repudiation of al-Qaeda's philosophy of violence. Others saw the upheavals as a threat to regional stability as these strongmen dictators had kept radical groups in check.

As the world marks on Saturday the 20th anniversary of the terror attacks in the US on September 11, 2001, there has been much debate on how the Arab Spring came about and what it meant for the War on Terror.

To consider the Arab Spring uprisings a direct result of 9/11 would be a very simplistic approach. The uprisings were the result of decades of resentment at political repression, corruption and lack of opportunities. Moreover, the revolutions took markedly different trajectories in different countries. While protests in Tunisia, Egypt and Morocco saw sporadic clashes, the likes of Libya, Syria and Yemen plunged into civil war... conflicts that continue to this day.

The impact of the Arab Spring on the countries where the uprisings occurred remains another point of debate; Tunisia was the only nation where a democratic transition happened. Egypt saw a brief experiment with democracy that ended with the return of military rule, while Syria, Libya and Yemen remain in chaos.

How al-Qaeda saw the Arab Spring

Like any opportunistic extremist group, al-Qaeda was quick to take credit for the Arab Spring. In a video message to mark the 10th anniversary of 9/11, al-Qaeda chief Ayman al-Zawahiri claimed the attacks in 2001 led to the “Arab volcano” in 2011. Zawahari claimed al-Qaeda had forced the US to press its allies in the Middle East to change policies, thereby bringing about upheaval.

In fact, even Osama Bin Laden welcomed the Arab Spring. In a letter written days before he was killed by US forces in May 2011, Bin Laden wrote the Arab uprisings were "a great and glorious event" that showed "things are strongly heading toward the exit of Muslims from being under the control of America".

In The Great War of Our Time: The CIA's Fight Against Terrorism--From al Qa'ida to ISIS, a book published in 2015, Michael Morell argued the CIA had failed to predict the Arab Spring and its impact. Morell, who was deputy chief of the CIA in 2011, told CNN in 2015, "We said we think this (Arab Spring uprisings) is going to undercut al-Qaeda; we think this is going to undercut their narrative that it takes violence to bring political change. And that turned out to be wrong. The Arab Spring was really a spring for al-Qaeda."

Morell conceded the fall of strong regimes in several countries "destroyed institutions that were capable of keeping a handle on them (al-Qaeda)" and undercut the willingness of some Arab countries to take on extremism.

How Arab Spring made al-Qaeda evolve

Academic Stephen Tankel, who has advised the US department of defense, also supported the viewpoint of Morell about how destruction of institutions in the Arab Spring had reinvigorated al-Qaeda.

Writing for the Observer Research Foundation in 2019, Tankel noted, "The weakening or outright removal of police states created space for mobilisation in places where jihadists had previously had little room for manoeuvre. While many experts initially focused on how the Arab uprisings affected the jihadist narrative, jihadist leaders recognised the opportunities the revolutions presented."

The situation was made worse by the release of thousands of al-Qaeda supporters by the short-lived regime of Mohammed Morsi in Egypt in 2012-13 and support to extremist groups by the regimes in Syria and Libya to fight off challenges to their rule.

Tankel argued al-Qaeda had gone 'glocal', by returning to "locally focused jihadist violence in the heart of the Arab world", rather than aiming to take on the West.

Tankel also referred to the rise of ISIS as a phenomenon that saw "jihadist organisations transformed into war-fighting militias that pursued state-building enterprises with greater sophistication".

ISIS, originally an affiliate of al-Qaeda, started making headlines after Zawahari expelled the group in February 2014. ISIS replaced al-Qaeda in public perception as a greater threat as it increased control of territory in Iraq and Syria. However, al-Qaeda was rebuilding at the time ISIS was making headlines, according to analyst Bruce Hoffman. Writing for the Council on Foreign Relations in 2018, Hoffman noted al-Qaeda leaders "dispersed to Syria, Iran, Turkey, Libya, and Yemen, with only a hard-core remnant of top commanders still in Afghanistan and Pakistan", who used encrypted communication systems to stay in touch.

Hoffman noted ISIS could no longer compete with al-Qaeda "in terms of influence, reach, manpower, or cohesion". He credited al-Qaeda's 'resurrection' to strategic decisions by Zawahari, including avoiding attacks against the West and strikes that could kill Muslim civilians, with the aim of projecting a 'moderate' image. Hoffman argued Zawahari had decentralised al-Qaeda. He wrote in 2018, "al-Qaeda is truly ‘glocal’ having effectively incorporated local grievances and concerns into a global narrative that forms the foundation of an all-encompassing grand strategy."

What to make of the new al-Qaeda?

US scholar Katherine Zimmerman, who is an expert on al-Qaeda, argued in a paper for the Hudson Institute in April this year that "interpreting the absence of a major al-Qaeda attack as weakness judges al-Qaeda’s strength by the wrong metric". She argued the Arab Spring had achieved what al-Qaeda never could: Mobilise the masses against Arab regimes.

She wrote, "Al-Qaeda had softened its call for global jihad, favouring instead the local fight. This adaptation better enabled al-Qaeda to extend its relationships into various communities, preying on their vulnerabilities and broaden its reach into the Muslim world."

She argued, "Today al-Qaeda has more fighters active in more countries than ever before. It has strengthened without raising alarms in Western capitals, building a popular base through its ‘localization’ effort while still pursuing capabilities to conduct transnational terror attacks." Zimmerman referred to the successes of al-Qaeda affiliates in controlling territory in parts of Syria, Yemen, Mali and Somalia.

She warned al-Qaeda was waiting to capitalise on the US drawdown of forces from Afghanistan and the Western nations shifting resources from counter-terrorism to other security priorities.