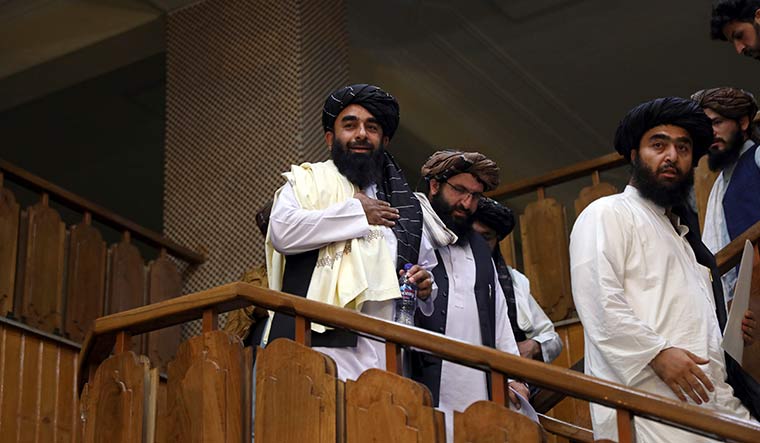 The neighbouring countries of Afghanistan on Thursday issued a joint statement after the first ministerial meeting, urging the Taliban to form an inclusive government and follow moderate policies.

It was the first ministerial meeting of Afghanistan's neighbours -- China, Iran, Tajikistan, Turkmenistan and Uzbekistan -- since the Taliban took over in Kabul.

They called for allowing unhindered access and protection to United Nations entities and other international humanitarian organisations to provide necessary aid and assistance to the people in need in Afghanistan.

The statement expressed support for the sovereignty, independence and territorial integrity of Afghanistan, and non-interference in its internal affairs, and noted that the future of Afghanistan should be determined by its people, following the provisions of the UN Charter.

It also reiterated that terrorist organisations, such as ISIS, al-Qaeda, East Turkestan Islamic Movement, Tehrik-e-Taliban Pakistan, Balochistan Liberation Army, Jondollah and others should not be allowed to maintain a foothold on Afghanistan's territory.

The group expressed readiness to keep ports open for Afghanistan and ensure the smooth cross border flow of goods to facilitate Afghanistan's access to external support and committed to continue providing medical supplies as well as technical and other assistance to the people of Afghanistan's efforts to fight COVID-19.

Taliban spokesman Suhail Shaheen the Global Times that they had spoken to other Afghan politicians. And if an agreement is reached, others outside the current cabinet will have a chance to take positions in the new high-level government. Shaheen noted that the permanent ministers would be appointed shortly after careful consideration. "We believe in an inclusive government," he said.

Shaheen said that the interim government was needed at the time to fill a ‘void.’ Prime Minister Mullah Hasan Akhund is still on the UN sanctions list, and Interior Minister Sirajuddin Haqqani is the son of the founder of the Haqqani Network, which was classified as a group. terrorist from the USA. This could make it more difficult for the new government to gain international recognition and restore normal trade, experts said.

Shaheen also said that the Taliban plans to extend invitations to envoys from China and Russia to Afghanistan.

The Chinese embassy in Kabul is still operational and some Chinese citizens have remained in the country.

"Our security forces will be available around the clock. If they have any concerns, we are ready to listen to them and respond to them. In addition, when our forces entered Kabul, we were in contact with your embassy and your diplomats were in contact with us 24 hours a day. We provided them with facilities and insurance, " Shaheen said.

He also indicated that the Taliban is keen on participating in the China-proposed Belt and Road Initiative (BRI).

Chinese State Councilor and Foreign Minister Wang Yi, on Wednesday, said that China would provide 3 million doses of COVID-19 vaccines to Afghanistan and emergency humanitarian aid worth 200 million yuan ($31 million) including food, medicines and other winter supplies. One of the main reasons that China is taking an interest to engage in relations with the Taliban, is Afghanistan’s staggering mineral resources.

Kremlin Press Secretary Dmitry Peskov, on Friday, said that Russia does not plan on negotiating with the Taliban. Russia’s Ambassador to Afghanistan Dmitry Zhirnov claimed that Kabul was safer after the Taliban took power than when ousted President Ashraf Ghani was in charge, TRT World reported.

The Global Times also reported that Chinese analysts are thrilled over the prospect of re-opening cargo train service between China and Afghanistan, considering land ports play an important role in trade with the land-locked nation. The freight train also takes less time, about 15 days, compared with one to three months of road transport via Pakistan.