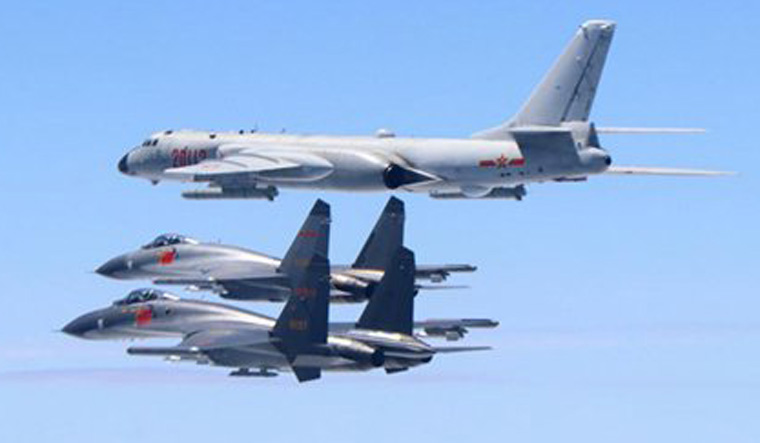 The People's Liberation Army (PLA) of China on Tuesday announced it had deployed a range of military aircraft and warships to multiple areas near Taiwan.

"The PLA Eastern Theater Command on Tuesday dispatched warships, anti-submarine warfare aircraft and fighter jets in surrounding maritime and aerial areas near the southwest and southeast of the island of Taiwan for military exercises including joint live-fire assaults, and also for testing the command troops' integrated joint operation capabilities," a PLA spokesperson was quoted as saying by the state-run Global Times.

The Global Times linked the exercise to "provocations” by the US and Taiwan.

Interestingly, the news of the exercise comes a day after an editorial in the Global Times warned Taiwan that the US would abandon its allies. For decades, Washington DC has supported Taiwan's independence and has remained its largest strategic ally and arms supplier.

The Global Times editorial on Monday claimed "Many people cannot help but recall how the Vietnam War ended in 1975: The US abandoned its allies in South Vietnam; Saigon was taken over; then the US evacuated almost all its citizens in Saigon. And in 2019, US troops withdrew from northern Syria abruptly and abandoned their allies, the Kurds."

The editorial noted, "Once a cross-Straits war breaks out while the mainland seizes the island with forces, the US would have to have a much greater determination than it had for Afghanistan, Syria, and Vietnam if it wants to interfere."

Amid the taunts from China, the government of Taiwan dismissed fears the island's status was similar to Afghanistan.

Taiwan Premier Su Tseng-chang was quoted by Reuters as saying, "Today, there are powerful countries that want to swallow up Taiwan using force, and likewise we are also not afraid of being killed or imprisoned... We must guard this country and this land, and not be like certain people who always talk up the enemy's prestige and talk down our resolve."

When asked whether he or the president would flee Taiwan in the event "the enemy was at the gates" as it happened in Afghanistan, Su said, "people had feared neither arrest nor death when Taiwan was a dictatorship under martial law".