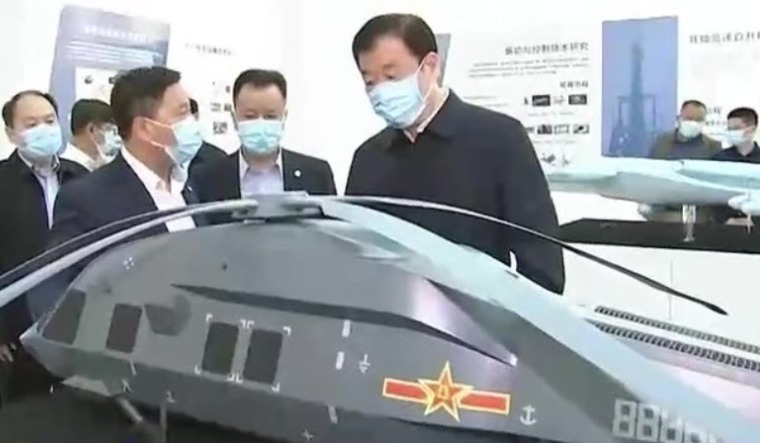 When is a model of an aircraft more than just a model? That may sound like a lame rehash of a tired cliche, but a photograph of a model of a helicopter at the China Helicopter Research and Development Institute in Jingdezhen, East China's Jiangxi Province, has sparked a buzz.

The China Helicopter Research and Development Institute is a division of the Aviation Industry Corporation of China (AVIC), a behemoth of China's aerospace sector.

According to China's Global Times, the model, believed to be a variant of the Chinese Z-20 helicopter, was displayed when a local official of the Chinese Communist Party visited the institute on May 19. However, the model triggered a buzz on social media towards the end of May as international experts argued it bore similarities to a mysterious, yet iconic aircraft: The 'stealth' Black Hawk helicopter of the US military.

The US military used customised versions of its Black Hawk helicopters that had features to reduce their radar and infra-red signatures to reach the compound used by Al Qaeda leader Osama Bin Laden in Abottabad, Pakistan, on May 2, 2011.

One of these 'stealth Black Hawks' crashed in the raid that ended with the US killing Bin Laden. The US military destroyed the wreckage of the crashed helicopter using explosives, but its tail remained intact.

At the time, the raid triggered uproar in Pakistan as Islamabad vehemently protested against the violation of its sovereignty. Soon after the raid, reports emerged that Pakistan allowed experts from China to examine the wreckage of the crashed stealth Black Hawk. Reports claimed Chinese officials were allowed to take photographs and samples of the materials used on the stealth Black Hawk.

Why tech of stealth Black Hawk was important

Stealth aircraft typically use multiple methods to reduce their chances of detection by radars and infrared (heat) sensors. These include modifying parts of the airframe to weaken reflected radar signals, redirecting engine exhausts to reduce heat and using 'radar-absorbent' material in construction.

US defence website The Drive claimed the stealth model of the Z-20 on display had a 'trapezoidal airframe' similar to earlier US studies into stealth versions of the Black Hawk. The Drive claimed Pakistan seized the tail of the crashed stealth Black Hawk, which included extensive use of composite material to reduce noise, weight and radar signature. Pakistan returned the wreckage three weeks later after intensive diplomacy. Tyler Rogoway, the author of the article on The Drive, explained the importance of the tail design as he wrote "loss of that tail upped China's knowledge base on low-observables by at least a decade, especially when it comes to helicopter applications".

The Z-20 helicopter, which according to Chinese reports first flew in 2013, has emerged in recent years as the most important addition to China's rotary aviation capabilities. The Z-20 is a 'medium-lift' helicopter meant for a range of missions in the Chinese army and navy such as troop and cargo transport, evacuation and anti-submarine and anti-ship missions. Maritime variants of the Z-20 have emerged in the past two years, some touting small anti-ship missiles.

The Drive article speculated a stealth version of the Z-20 could have potential applications in Chinese operations against Taiwan.

The Z-20 has design similarities to the Black Hawk. Experts attribute this to the fact that the US sold China a small fleet of a civilian version of the Black Hawk in the early 1980s.

History of deceit by Pakistan

Osama Bin Laden was the world's most wanted man for decades. But he proved to be the means for China to leapfrog technical barriers in its development of military technology. With a little help from Pakistan!

Shortly after the raid that killed Osama Bin Laden, US Congressman Dana Rohrabacher wrote a letter to his colleagues on May 9, 2011, about Pakistan's strategic relationship with China. Rohrabacher alleged Pakistan had transferred to China a Tomahawk cruise missile that the US Navy fired in 1998 in an attack on Bin Laden's camps in Afghanistan. At least one of the Tomahawk missiles malfunctioned in flight. Rohrabacher wrote, "In 1998, Pakistan’s military and intelligence services facilitated the transfer to Communist China of a Taliban-recovered unexploded American Tomahawk cruise missile, which we fired in an attempt to kill Osama Bin Laden and members of al-Qaeda. The Communist Chinese reverse-engineered the missile and dissected its components allowing them to learn its vulnerabilities and defeat its capabilities."

The US had launched the attack on Bin Laden in 1998 to retaliate against suicide bomb strikes against its embassies in Kenya and Tanzania earlier that year. Ironically, back then itself, US experts had expressed concerns of Pakistan handing over technology from the Tomahawk to China as Pakistani officials claimed they were studying the missile.

In 2020, former Pakistan prime minister Nawaz Sharif claimed that Pakistan had reverse-engineered the Tomahawk missile that malfunctioned. The US attack on Bin Laden in 1998 happened when Sharif was prime minister.